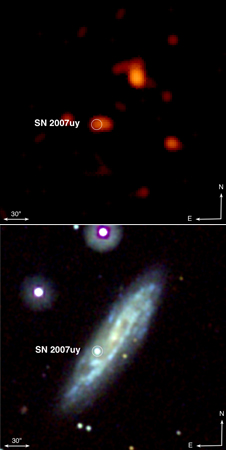 Swift took these images of SN 2007uy in galaxy NGC 2770 before SN 2008D exploded. An X-ray image is on top. The lower image is in visible light. Credit: NASA/Swift Science Team/Stefan Immler. > Larger image When a gigantic star blows up, astronomers call it a "supernova." Over the past 100 years, astronomers have observed thousands of these explosions. But in every case, they were seeing the star after the explosion took place. They were seeing the hot debris from the explosion racing outward. It would be like seeing fireworks a few seconds after they go off, when the colorful lights are shooting away from the puff of smoke that mark the locations of the actual explosion.

Now, thanks to NASA’s Swift satellite, astronomers have seen a star actually blow up. The discovery is due to Swift’s capabilities and some alert astronomers, but also a bit of good luck.

On January 9, 2008, Alicia Soderberg and Edo Berger of Princeton University, in Princeton, N.J., were using Swift’s X-ray Telescope to observe a distant spiral-shaped galaxy known as NGC 2770. Suddenly, at 9:33 in the morning Eastern Time, the telescope picked up a powerful burst of X-rays coming from the galaxy. The burst lasted 5 minutes before it faded away.

Astronomers were fortunate that Swift happened to be looking at the right place at the right time when the burst occurred, but the great French biologist Louis Pasteur once said, "Chance favors the prepared mind." Soderberg and Berger immediately realized that Swift had made an important observation, so they quickly organized a plan to use telescopes in space and on Earth to follow-up Swift’s discovery.

Over the next few weeks, observations made by NASA’s Hubble Space Telescope and Chandra X-ray Observatory, along with Swift and other major telescopes, showed beyond a shadow of a doubt that the January 9 X-ray burst signaled the actual explosion of a giant star. For the first time, astronomers had seen a star blow up in real time!

The X-rays were due to a powerful blast wave bursting through the star’s outer layers, and blowing it to “Kingdom Come.” The blast wave itself was triggered deep inside the star, when the nuclear engine at the center ran out of fuel and collapsed. 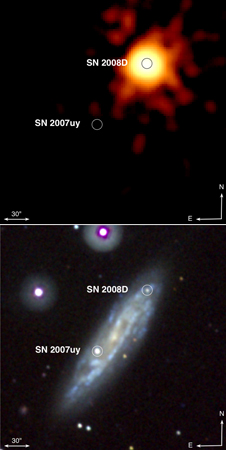 On January 9 Swift caught a bright X-ray burst from an exploding star. A few days later, SN 2008D appeared in visible light. Credit: NASA/Swift Science Team/Stefan Immler.
> Larger image For decades, astronomers have been hoping to see such an explosion. And now, for the first time, they have actually seen what happens when a star goes supernova.

"For years we have dreamed of seeing a star just as it was exploding, but actually finding one is a once in a lifetime event," says Soderberg." This newly born supernova is going to be the Rosetta stone of supernova studies for years to come."