These explosions, which can outshine their galaxy for weeks, release large and consistent amounts of energy at visible wavelengths. These qualities make them among the most valuable tools for measuring distance in the universe. Because astronomers know the intrinsic brightness of Type Ia supernovae, how bright they appear directly reveals how far away they are.

"For all their importance, it's a bit embarrassing for astronomers that we don't know fundamental facts about the environs of these supernovae," said Stefan Immler, an astrophysicist at NASA's Goddard Space Flight Center in Greenbelt, Md. "Now, thanks to unprecedented X-ray and ultraviolet data from Swift, we have a clearer picture of what's required to blow up these stars." 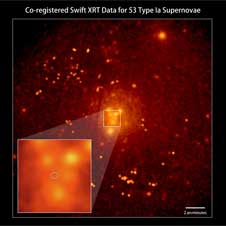 › Larger lo-res image
This image combines all Swift X-ray Telescope observations for 53 Type Ia supernovae. The images are stacked to align the supernovae at the center (circled in inset), giving a total effective exposure of 35.3 days -- the deepest-ever X-ray observation of Type Ia supernovae. Unresolved hot gas within the host galaxies produces the diffuse orange glow, while yellow and orange blobs reveal X-ray binaries in the host galaxies as well as foreground stars in our own. No additional X-ray emission is visible at the position of the stacked supernovae, placing strong limits on their host systems. Credit: NASA/Swift/Stefan Immler
› Larger image
› Unlabeled image Astronomers have known for decades that Type Ia supernovae originate with a remnant star called a white dwarf, which detonates when pushed to a critical mass. The environment that sets the stage for the explosion, however, has been harder to pin down.

According to the most popular scenario, a white dwarf orbits a normal star and pulls a stream of matter from it. This gas flows onto the white dwarf, which gains mass until it reaches a critical threshold and undergoes a catastrophic explosion.

"A missing detail is what types of stars reside in these systems. They may be a mix of stars like the sun or much more massive red- and blue-supergiant stars," said Brock Russell, a physics graduate student at the University of Maryland, College Park, and lead author of the X-ray study.

In a competing model, the supernova arises when two white dwarfs in a binary system eventually spiral inward and collide. Observations suggest both scenarios occur in nature, but no one knows which version happens more often.

Swift's primary mission is to locate gamma-ray bursts, which are more distant and energetic explosions associated with the birth of black holes. Between these bursts, astronomers can use Swift's unique capabilities to study other objects, including newly discovered supernovae. The satellite's X-ray Telescope (XRT) has studied more than 200 supernovae to date, with about 30 percent being Type Ia.

Russell and Immler combined X-ray data for 53 of the nearest known Type Ia supernovae but could not detect an X-ray point source. Stars shed gas and dust throughout their lives. When a supernova shock wave plows into this material, it becomes heated and emits X-rays. The lack of X-rays from the combined supernovae shows that supergiant stars, and even sun-like stars in a later red giant phase, likely aren't present in the host binaries.

In a companion study, a team led by Peter Brown at the University of Utah in Salt Lake City looked at 12 Type Ia events observed by Swift's Ultraviolet/Optical Telescope (UVOT) less than 10 days after the explosion. A supernova shock wave should produce enhanced ultraviolet light as it interacts with its companion, with larger stars producing brighter, longer enhancements. Swift's UVOT detected no such emission, leading the researchers to exclude large, red giant stars from Type Ia binaries.

These images from Swift's Ultraviolet/Optical Telescope (UVOT) show the nearby spiral galaxy M101 before and after the appearance of SN 2011fe (circled, right), which was discovered on Aug. 24, 2011. At a distance of 21 million light-years, it was the nearest Type Ia supernova since 1986 but appeared too late for inclusion in the published studies. Left: View constructed from images taken in March and April 2007. Right: The supernova was so bright that most UVOT exposures were short, so this view includes imagery from August through November 2011 to better show the galaxy. Credit: NASA/Swift/Peter Brown, Univ. of Utah
› Larger image
› Larger image, no circle

The ultraviolet studies rely on early, sensitive observations. As Brown's study was being written, nature provided a great case study in SN 2011fe, the closest Type Ia supernova since 1986. Early Swift UVOT observations show no ultraviolet enhancement. According to the findings in an unpublished study led also by Brown, this means any companion must be smaller than the sun.

Swift data on SN 2011fe also figure prominently in unpublished studies led by Alicia Soderberg at the Harvard-Smithsonian Center for Astrophysics in Cambridge, Mass. Preliminary results suggest that the explosion was caused by merging white dwarfs.

Swift launched in November 2004 and is managed by Goddard. It is operated in collaboration with Pennsylvania State University and other national and international partners.