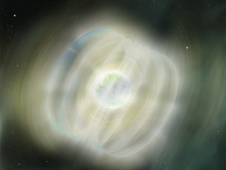 This illustration shows a flare from magnetar Swift J195509+261406. A starquake is probably what triggered the object's 40 optical flares. Credit: NASA/Swift/Sonoma State University/A. Simonnet
> Larger image "Twinkle, twinkle little star" goes the nursery rhyme. Now, astronomers are reporting on a strange case where one of the littlest of stars "twinkled" with gamma rays, X-rays, and light -- and then vanished.

The story began on June 10, 2007. That’s when a spike of gamma-rays lasting less than five seconds washed over NASA's Swift satellite. But this high-energy flash wasn't a gamma-ray burst -- the birth cry of a black hole far across the universe. It was something much closer to home.

Swift immediately reported the event’s position to astronomers all over the world. Within a minute, robotic telescopes turned to a spot in the constellation Vulpecula. Because Swift found an X-ray glow coming from this point, astronomers cataloged the object as "Swift J195509+261406," after its position in the sky and the discovering satellite. (Well, they had to call it something!)

During the next three days, the object brightened and faded in visible light. Not once, not twice -- but 40 times! Eleven days later, it flashed again, this time at infrared wavelengths. Then, it disappeared from view.

"I love it when Swift enables a discovery like this," says Neil Gehrels, the mission's lead scientist at NASA Goddard Space Flight Center in Greenbelt, Md. "The observatory is an astronomical robot built for gamma-ray burst studies, but it can also quickly point at other bizarre objects with bright flares."

Astronomers think the object was a neutron star -- the crushed innards of a massive star that long ago exploded as a supernova -- about 15,000 light-years away. Writing in the Sept. 25 issue of the science journal Nature, a team of 42 scientists concludes that Swift J195509+261406 is a special type of neutron star called a magnetar.

"We are dealing with an object that was hibernating for decades before entering a brief activity period," explains Alberto J. Castro-Tirado, lead author of the paper. "Magnetars remain quiet for decades."

Astronomers put these magnetic monsters in their own class: magnetars. Only about a dozen magnetars are known, but scientists suspect our galaxy contains many more. We just don’t see them because they’re quiet most of the time.

So what happened last year? Why did this previously unseen star begin behaving so badly? And why did it stop?

Combine a magnetar's pumped-up magnetic field with its rapid spin, and sooner or later something has to give. Every now and then, the magnetar’s rigid crust snaps under the strain.

This "starquake" releases pent-up magnetic energy, which creates bursts of light and radiation. Once the star’s crust and magnetic field settle down, the star goes dark and disappears from our view. At least until the next quake.

Astronomers suspect that magnetars lose their punch as time passes, but Swift J195509+261406 provides the missing link between objects exhibiting regular activity and those that have settled into retirement -- and invisibility.

So twinkle, twinkle magnetar. That's how we'll learn just where you are. Francis Reddy
NASA's Goddard Space Flight Center
› Back To Top