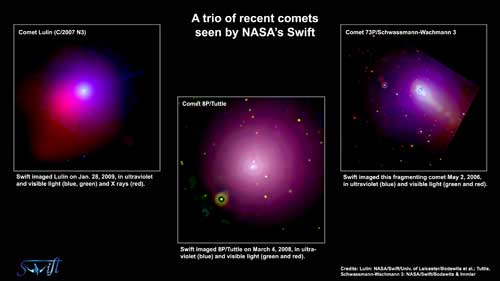 Montage of comets Lulin, Tuttle, and SW3 Credits: See individual images below for credits
> Click for larger image
A montage of comet images made using NASA’s Swift spacecraft illustrates just how different three comets can be. The images, including a never-released image of Comet 8P/Tuttle, were shown today during a live, 24-hour video webcast called “Around the World in 80 Telescopes.” Organized by the European Southern Observatory headquartered in Garching, Germany, the webcast is part of the 100 Hours of Astronomy project, a worldwide celebration of astronomy running through April 5.

Swift’s primary job is to quickly alert astronomers about new gamma-ray bursts – powerful explosions from distant dying stars. “But Swift's rapid response and flexibility allow us to perform other science while the spacecraft is waiting for gamma-ray bursts to occur,” said presenter Geronimo Villanueva, a planetary scientist at NASA’s Goddard Space Flight Center in Greenbelt, Md. 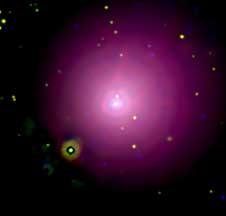 > Click for larger image
Swift’s studies of comets help astronomers explore the solar wind and probe the make-up of comets. This ultraviolet and optical Swift image shows Comet 8P/Tuttle, which passed through the inner solar system in 2008. Credit: NASA/Swift/Bodewits & Immler From its orbital perch, Swift can view targets using ultraviolet wavelengths, visible light, and X rays -- and it’s the only observatory that sees them at the same time. Between bursts, astronomers task Swift to survey the entire sky at X-ray wavelengths, monitor exploding stars, image galaxies, and study comets.

Comets are clumps of frozen gases mixed with dust sometimes called "dirty snowballs." These icy bodies cast off gas and dust whenever they venture near the sun. Most recently, Swift observed Comet Lulin as part of a study led by Jenny Carter at the University of Leicester, U.K. Lulin was faintly visible to the naked eye when it passed 38 million miles from Earth --- or about 160 times farther than the moon – in late February.

Other comets captured by Swift include 73P/Schwassmann-Wachmann 3 (SW3) -- a fragmenting comet that passed Earth in 2006 -- and 8P/Tuttle, which rounded the sun in January 2008. “One of my projects is to work out the composition of Tuttle by studying the gases that surround it,” Villanueva said. Swift’s Ultraviolet/Optical Telescope includes a device called a grism that can separate wavelengths in ultraviolet light in much the same way as a prism spreads sunlight into colors. “Swift’s grism covers a ‘sweet spot’ where many key comet gases strongly emit.” 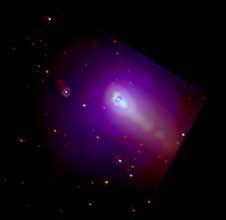 > Click for larger image
Comet 73P/Schwassman-Wachmann 3 -- Credit: NASA/Swift/Bodewits & Immler Swift also detects X rays from comets. The X rays arise through a process called charge exchange, as fast-moving ions emitted by the sun snatch electrons from neutral comet gases. Because this interaction occurs over such a large region, cometary X-ray emission can reach powers as high as a billion watts.

Comets provide excellent laboratories to explore this process, which may play an important role in young planetary systems and other places where hot and cold gases collide. Cometary X rays also serve as a way to probe conditions in solar ions streaming through the solar system (the solar wind). 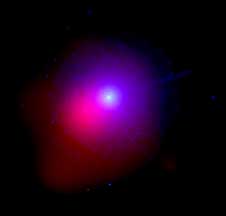 > Click for high resolution image
Comet Lulin -- Credit: NASA/Swift/Univ. of Leicester/Bodewits et al. “The problem with many comets is that we often cannot use all of Swift's instruments because they are simply too bright,” Villanueva explained. Comet 17P/Holmes, which underwent a surprising outburst in October 2007, shed a lot of dust. “But we never detected X rays from Holmes, and it was too bright to study its ultraviolet spectrum.”

Neither SW3 nor Tuttle could be imaged in X rays with Swift, although NASA’s Chandra X-ray Observatory detected both comets. They each produced much less water than Comet Lulin, which was gushing out nearly 800 gallons of water a second when Swift observed it.

“Someone calculated that’s equivalent to $17,000 of bottled water each second,” Villanueva added, smiling.