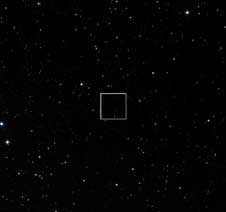 > Larger image
GRB 080607 exploded June 7, 2008, in the constellation Coma Berenices. The box indicates the sky area shown in the Swift image. Credit: DSS/STScI/AURA Astronomers combining data from NASA's Swift satellite, the W. M. Keck Observatory in Hawaii, and other facilities have, for the first time, identified gas molecules in the host galaxy of a gamma-ray burst.

The explosion, designated GRB 080607, occurred in June. "This burst gave us the opportunity to 'taste' the star-forming gas in a young galaxy more than 11 billion light-years away," says University of California, Santa Cruz, professor Xavier Prochaska. The finding provides insight into star formation when the universe was about one-sixth its present age.

Gamma-ray bursts -- the universe's most luminous explosions -- create bright afterglows. Their light encodes information about the gas and dust it encounters on its way to Earth.

"We clearly see absorption from two molecular gases: hydrogen and carbon monoxide. Those are gases we associate with star-forming regions in our own galaxy," Prochaska says. The team believes that the burst exploded behind a thick molecular cloud similar to those that spawn stars in our galaxy today.

Gamma rays from GRB 080607 triggered Swift's Burst Alert Telescope shortly after 2:07 a.m. EDT on June 7, 2008. Swift calculated the burst's position, beamed the location to a network of observatories, and turned to study the afterglow. 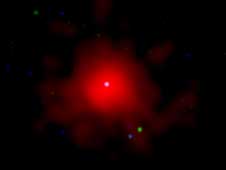 > Larger image
This image merges Swift optical (blue, green) and X-ray views of GRB 080607. The white spot at center is the burst’s optical afterglow. Credit: NASA/Swift/Stefan Immler That night, University of California, Berkeley, professor Joshua Bloom and graduate students Daniel Perley and Adam Miller were using the Low Resolution Imaging Spectrometer on the 10m Keck I Telescope in Hawaii. "Because afterglows fade rapidly, we really had to scramble when we received the alert," Perley says. "But in less than 15 minutes, we were on target and collecting data."

The spectrum from Keck established that the explosion took place 11.5 billion light-years away. GRB 080607 blew up when the universe was just 2.2 billion years old.

The molecular cloud in the burst's host galaxy was so dense, less than 1 percent of the afterglow's light was able to penetrate it. "Intrinsically, this afterglow is the second brightest ever seen. That's the only reason we were able to observe it at all," Prochaska says. 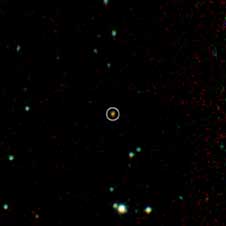 Nearly half of the absorption lines found in the Keck spectrum are unidentified. The team expects that understanding them will provide new data on the simplest space molecules.

Prochaska and Sheffer presented the findings today at the 213th meeting of the American Astronomical Society in Long Beach, Calif. A paper describing the results will appear in a future issue of Astrophysical Journal Letters.

Most gamma-ray bursts occur when massive stars run out of nuclear fuel. As the star’s core collapses into a black hole or neutron star, gas jets punch through the star and into space. Bright afterglows occur as the jets heat gas that was previously shed by the star. Because a massive star lives only a few tens of millions of years, it never drifts far from its natal cloud.

Swift, launched in November 2004, is managed by NASA's Goddard Space Flight Center in Greenbelt, Md. It was built and is being operated in collaboration with Penn State, the Los Alamos National Laboratory, and General Dynamics in the U.S.; the University of Leicester and Mullard Space Sciences Laboratory in the United Kingdom; Brera Observatory and the Italian Space Agency in Italy; plus additional partners in Germany and Japan.