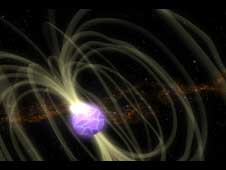 SGR 0501+4516, illustrated here in an artist concept, is a member of a select class of objects called magnetars. These stellar remnants are the most magnetized objects in the cosmos. Only 15 are known. Credit: NASA/Goddard Space Flight Center Conceptual Image Lab
› Larger image On Aug. 22, 2008, NASA's Swift satellite reported multiple blasts of radiation from a rare object known as a soft gamma repeater, or SGR. Now, astronomers report an in-depth study of these eruptions using the European Space Agency's XMM-Newton and International Gamma-Ray Astrophysics Laboratory (INTEGRAL) satellites.

The object, designated SGR 0501+4516, was the first of its type discovered in a decade and is only the fifth confirmed SGR. "Some sources are extremely active, but others can be quiet for a decade or more," said Nanda Rea, University of Amsterdam, who led the study. "This suggests many members of this class remain unknown."

Astronomers think the eruptions of SGRs arise from the most highly magnetized objects in the universe -- magnetars. Magnetars are neutron stars -- the crushed cores of exploded stars -- that, for reasons not yet known, possess ultra-strong magnetic fields. With fields 100 trillion times stronger than Earth’s, a magnetar placed half the moon’s distance would wipe the magnetic strips of every credit card on the planet. "Magnetars allow us to study extreme matter conditions that cannot be reproduced on Earth," said Kevin Hurley, a team member at the University of California, Berkeley.

Both SGRs and a related group of high-energy neutron stars -- called anomalous X-ray pulsars -- are thought to be magnetars. But, all told, astronomers know of only 15 examples.

Twelve hours after Swift pinpointed SGR 0501+4516, XMM-Newton began the most detailed study of a fading magnetar outburst ever attempted. The object underwent hundreds of small bursts over a period of more than four months. Only five days after the initial eruption, INTEGRAL detected X-rays from the object that were beyond the energy range XMM-Newton can see. It's the first time such transient high-energy X-ray emission has been detected during an SGR's outburst phase. This emission disappeared within ten days of the outburst. The findings were published online June 15 in the Monthly Notices of the Royal Astronomical Society.

The team plans further observations of SGR 0501+4516 with XMM-Newton. They hope to detect the object in a quiet state in order to probe the calm after the storm.