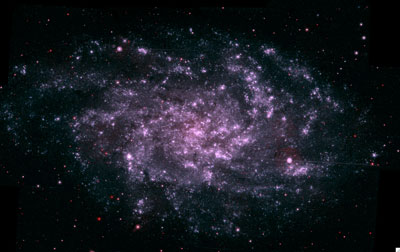 Combining 39 individual frames taken over 11 hours of exposure time, NASA astronomers have created this ultraviolet mosaic of the nearby "Triangulum Galaxy." "This is the most detailed ultraviolet image of an entire galaxy ever taken," says Stefan Immler of NASA’s Goddard Space Flight Center in Greenbelt, Md. Immler used NASA’s Swift satellite to take the images, and he then assembled them into a mosaic that seamlessly covers the entire galaxy.

The Triangulum Galaxy is also called M33 for being the 33rd object in Charles Messier’s sky catalog. It is located about 2.9 million light-years from Earth in the constellation Triangulum. It is a member of our Local Group, the small cluster of galaxies that includes our Milky Way Galaxy and the Andromeda Galaxy (M31). Despite sharing our Milky Way’s spiral shape, M33 has only about one-tenth the mass. M33’s visible disk is about 50,000 light-years across, half the diameter of our galaxy.

Young, hot stars are prodigious producers of ultraviolet light, which heat up the surrounding gas clouds to such high temperatures that they radiate brightly in ultraviolet light. The image shows the giant star-forming region NGC 604 as a bright spot to the lower left of the galaxy’s nucleus. With a diameter of 1,500 light-years (40 times that of the Orion Nebula), NGC 604 is the largest stellar nursery in the Local Group.

"The ultraviolet colors of star clusters tell us their ages and compositions," says Swift team member Stephen Holland of NASA Goddard. "With Swift’s high spatial resolution, we can zero in on the clusters themselves and separate out nearby stars and gas clouds. This will enable us to trace the star-forming history of the entire galaxy.”

"The entire galaxy is ablaze with starbirth," adds Immler. "Despite M33’s small size, it has a much higher star-formation rate than either the Milky Way or Andromeda. All of this starbirth lights up the galaxy in the ultraviolet."