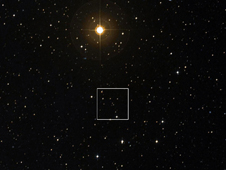 GRB 080913 exploded Sept. 13 at a whopping distance of 12.8 billion light-years away in the constellation Eridanus. The box indicates the sky area shown in the Swift image. Credit: DSS/STScI/AURA
> Larger image WASHINGTON -- NASA's Swift satellite has found the most distant gamma-ray burst ever detected. The blast, designated GRB 080913, arose from an exploding star 12.8 billion light-years away.

"This is the most amazing burst Swift has seen," said the mission's lead scientist Neil Gehrels at NASA's Goddard Space Flight Center in Greenbelt, Md. "It's coming to us from near the edge of the visible universe."

Because light moves at finite speed, looking farther into the universe means looking back in time. GRB 080913's "lookback time" reveals that the burst occurred less than 825 million years after the universe began.

The star that caused this "shot seen across the cosmos" died when the universe was less than one-sixteenth its present age. "This burst accompanies the death of a star from one of the universe's early generations," says Patricia Schady of the Mullard Space Science Laboratory at University College London, who is organizing Swift observations of the event. 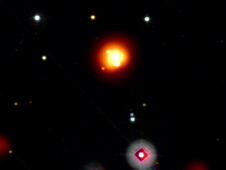 This image merges the view through Swift's UltraViolet and Optical Telescope, which shows bright stars, and its X-ray Telescope, which captures the burst (orange and yellow). Credit: NASA/Swift/Stefan Immler
> Larger image Gamma rays from the far-off explosion triggered Swift's Burst Alert Telescope at 1:47 a.m. EDT on Sept. 13. The spacecraft established the event's location in the constellation Eridanus and quickly turned to examine the spot. Less than two minutes after the alert, Swift's X-Ray Telescope began observing the position. There, it found a fading, previously unknown X-ray source.

Astronomers on the ground followed up as well. Using a 2.2-meter telescope at the European Southern Observatory in La Silla, Chile, a group led by Jochen Greiner at the Max Planck Institute for Extraterrestrial Physics in Garching, Germany, captured the bursts fading afterglow.

The telescope's software listens for alerts from Swift and automatically slewed to the burst position. Then, the team's Gamma-Ray Burst Optical/Near-Infrared Detector, or GROND, simultaneously captured the waning light in seven wavelengths. "Our first exposure began just one minute after the X-Ray Telescope started observing," Greiner says.

In certain colors, the brightness of a distant object shows a characteristic drop caused by intervening gas clouds. The farther away the object is, the longer the wavelength where this fade-out begins. GROND exploits this effect and gives astronomers a quick estimate of an explosion's shift toward the less energetic red end of the electromagnetic spectrum, or "redshift," which suggests its record-setting distance. 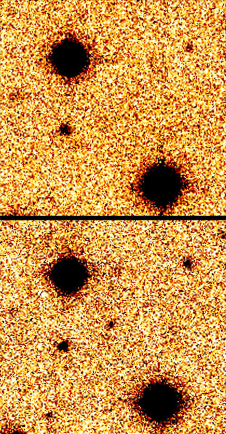 GRB 080913 can't be seen in one of GROND's optical filters (top), but appears in another (bottom). The sudden appearance of objects at longer wavelengths indicates great distance. Credit: MPE/GROND
> Larger image An hour and a half later, as part of Greiner's research, the Very Large Telescope at Paranal, Chile, targeted the afterglow. Analysis of the spectrum with Johan Fynbo of the University of Copenhagen established the blasts redshift at 6.7 -- among the most distant objects known.

Gamma-ray bursts are the universe's most luminous explosions. Most occur when massive stars run out of nuclear fuel. As their cores collapse into a black hole or neutron star, gas jets -- driven by processes not fully understood -- punch through the star and blast into space. There, they strike gas previously shed by the star and heat it, which generates bright afterglows.

The previous record holder was a burst with a redshift of 6.29, which placed it 70 million light-years closer than GRB 080913.

Swift, launched in November 2004, has had a banner year. In March, the satellite detected the brightest gamma-ray burst, which was visible to the human eye despite occurring billions of light-years away. And in January, the spacecraft's instruments caught the first X-rays from a new supernova days before optical astronomers saw the exploding star.

Swift is managed by Goddard. It was built and is being operated in collaboration with Penn State University, University Park, Pa., the Los Alamos National Laboratory in New Mexico, and General Dynamics of Gilbert, Ariz., in the U.S. International collaborators include the University of Leicester and Mullard Space Sciences Laboratory in the United Kingdom, Brera Observatory and the Italian Space Agency in Italy, and additional partners in Germany and Japan.
› Back To Top