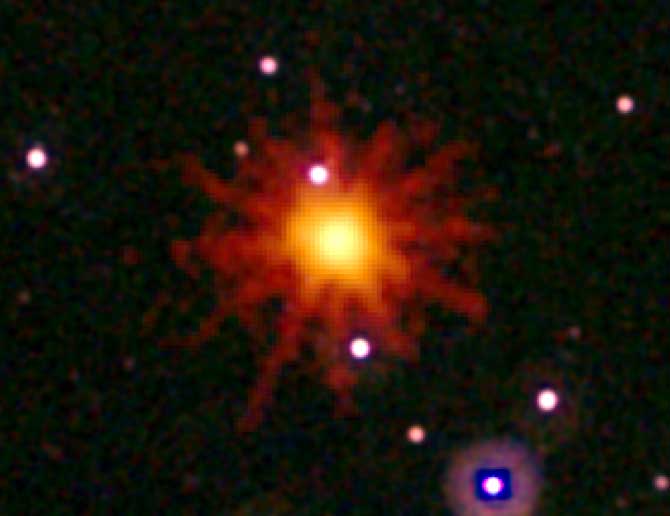 Images from Swift's Ultraviolet/Optical (white, purple) and X-ray telescopes (yellow and red) were combined in this view of GRB 110328A, which is now known as Sw 1644+57. The blast was detected only in X-rays, which were collected over a 3.4-hour period on March 28. Credit: NASA/Swift/Stefan Immler

On March 28, NASA's Swift's Burst Alert Telescope discovered a series of powerful X-ray blasts coming from a source in the constellation Draco. Astronomers around the world studied the unusual explosion, which is now known as Sw 1644+57. More than two months later, and with high-energy X-rays still coming from the spot, astronomers are convinced they're witnessing the destruction of a star as it plunges into the central black hole of a galaxy nearly 4 billion light-years away. The star was ripped apart by the black hole's intense tidal forces, and its gas continues to stream inward.

“With this event, we’re seeing a new class of object in the sky, one we think is directly tied to the feeding behavior of a galaxy’s supermassive black hole,” said Neil Gehrels, Swift’s lead scientist at NASA's Goddard Space Flight Center in Greenbelt, Md. “Such events likely will give us unprecedented insight into what happens deep in the heart of active galaxies, such as quasars and blazars.”