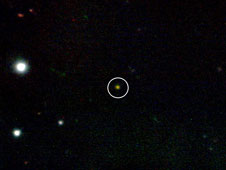 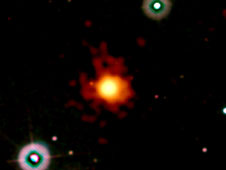 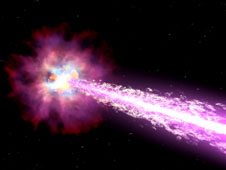 > View movie
> View other resolutions
Gamma-ray bursts longer than two seconds are caused by the detonation of a massive star at the end of its life. Jets of particles and gamma radiation are emitted in opposite directions from the stellar core as the star collapses. This animation shows what a gamma-ray burst might look like up close. Credit: NASA/Swift/Cruz deWilde NASA's Swift satellite and an international team of astronomers have found a gamma-ray burst from a star that died when the universe was only 630 million years old, or less than five percent of its present age. The event, dubbed GRB 090423, is the most distant cosmic explosion ever seen.

"Swift was designed to catch these very distant bursts," said Swift lead scientist Neil Gehrels at NASA's Goddard Space Flight Center in Greenbelt, Md. "The incredible distance to this burst exceeded our greatest expectations -- it was a true blast from the past."

At 3:55 a.m. EDT on April 23, Swift detected a ten-second-long gamma-ray burst of modest brightness. It quickly pivoted to bring its ultraviolet/optical and X-ray telescopes to observe the burst location. Swift saw a fading X-ray afterglow but none in visible light.

"The burst most likely arose from the explosion of a massive star," said Derek Fox at Pennsylvania State University. "We're seeing the demise of a star -- and probably the birth of a black hole -- in one of the universe's earliest stellar generations."

Gamma-ray bursts are the universe's most luminous explosions. Most occur when massive stars run out of nuclear fuel. As their cores collapse into a black hole or neutron star, gas jets -- driven by processes not fully understood -- punch through the star and blast into space. There, they strike gas previously shed by the star and heat it, which generates short-lived afterglows in many wavelengths.

"The lack of visible light alone suggested this could be a very distant object," explained team member Edo Berger of Harvard University.

Beyond a certain distance, the expansion of the universe shifts all optical emission into longer infrared wavelengths. While a star's ultraviolet light could be similarly shifted into the visible region, ultraviolet-absorbing hydrogen gas grows thicker at earlier times. "If you look far enough away, you can't see visible light from any object," he noted.

Within three hours of the burst, Nial Tanvir at the University of Leicester, U.K., and his colleagues reported detection of an infrared source at the Swift position using the United Kingdom Infrared Telescope on Mauna Kea, Hawaii. "Burst afterglows provide us with the most information about the exploded star and its environs," Tanvir said. "But because afterglows fade out so fast, we must target them quickly."

At the same time, Fox led an effort to obtain infrared images of the afterglow using the Gemini North Telescope on Mauna Kea. The source appeared in longer-wavelength images but was absent in an image taken at the shortest wavelength of 1 micron. This "drop out" corresponded to a distance of about 13 billion light-years.

As Fox spread the word about the record distance, telescopes around the world slewed toward GRB 090423 to observe the afterglow before it faded away.

At the Galileo National Telescope on La Palma in the Canary Islands, a team including Guido Chincarini at the University of Milan-Bicocca, Italy, determined that the afterglow's so-called redshift was at least 7.6. Tanvir's team, gathering nearly simultaneous observations using one of the European Southern Observatory's Very Large Telescopes on Cerro Paranal, Chile, found a redshift of 8.2, later confirmed by the Italian group. This means the burst exploded 13.035 billion light-years away.

"It's an incredible find," Chincarini said. "What makes it even better is that a telescope named for Galileo made this measurement during the year in which we celebrate the 400th anniversary of Galileo's first astronomical use of the telescope."

The previous record holder was a burst seen in September 2008. It showed a redshift of 6.7, which places it 190 million light-years closer than GRB 090423.

NASA's Goddard Space Flight Center manages Swift. It was built and is being operated in collaboration with Pennsylvania State University, the Los Alamos National Laboratory in New Mexico, and General Dynamics of Gilbert, Ariz., in the United States. International collaborators include the University of Leicester and Mullard Space Sciences Laboratory in the United Kingdom, Brera Observatory and the Italian Space Agency in Italy, and additional partners in Germany and Japan.