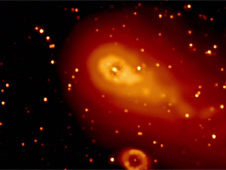 Swift's Ultraviolet/Optical Telescope (UVOT) captured Comet 73P/Schwassmann-Wachmann 3's fragment C as it passed the famous Ring Nebula (oval, bottom) on May 7, 2006. Swift watched as the crumbling comet left dusty blobs behind. Credit: NASA/Swift/Stefan Immler and Dennis Bodewits
> Larger image NASA's Swift Gamma-ray Explorer satellite rocketed into space in 2004 on a mission to study some of the highest-energy events in the universe. The spacecraft has detected more than 380 gamma-ray bursts, fleeting flares that likely signal the birth of a black hole in the distant universe. In that time, Swift also has observed 80 exploding stars and studied six comets.

Comets? ... Comets are "dirty snowballs" made of frozen gases mixed with dust. X-rays come from superhot plasmas. What do cold comets have in common with exploding stars or the birth of black holes?

"It was a big surprise in 1996 when the NASA-European ROSAT mission showed that comet Hyakutake was emitting X-rays," says Dennis Bodewits, a NASA Postdoctural Fellow at the Goddard Space Flight Center in Greenbelt, Md. "After that discovery, astronomers searched through ROSAT archives. It turns out that most comets emit X-rays when they come within about three times Earth's distance from the sun."

Bodewits is working with the Swift team at NASA's Goddard Space Flight Center in Greenbelt, Md., to study comets using data from the spacecraft's Ultraviolet/Optical Telescope (UVOT) and X-Ray Telescope (XRT). "Swift is an excellent platform for studying dynamic processes in comets," he says. 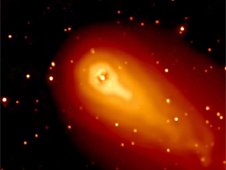 This movie combines Swift UVOT observations of Comet 73P/Schwassmann-Wachmann 3's fragment C from May 1 to May 11, 2006. Look for blobs of dust moving down the comet's inner tail (orange and yellow). Credit: NASA/Swift/Stefan Immler and Dennis Bodewits
> Watch video Thanks to image-processing from team member Stefan Immler, Swift's UVOT captured a striking sequence that shows unresolved blobs of dust trailing from a crumbling comet. In early May 2006, when the largest fragment of Comet 73P/Schwassmann-Wachmann 3 (SW3) passed Earth, Swift monitored its approach.

The piece, known as fragment C, is believed to be the comet's main body, which began splintering in 1995. In 2006, astronomers counted 66 fragments. Telescopes -- including NASA's Hubble and Spitzer -- revealed dust and condensations trailing several pieces. But fragment C showed no unusual changes -- except to Swift's ultraviolet eye. "It's subtle, but Swift caught clouds of dust and perhaps small pieces that no one else was able to," Immler says.

The UVOT also includes an ultraviolet grism, which combines a grating with a prism to separate incoming light by wavelength. "Swift's grism spans the wavelengths where carbon-bearing molecules and the hydroxyl molecule are most active. This gives us a unique view into the types and quantities of gas a comet produces, and that gives us clues about the origin of comets and the solar system," Bodewits explains. In fact, with the failure of the Hubble Space Telescope's ultraviolet spectrograph in 2004, Swift is currently the only space observatory covering this wavelength range.

As a comet's surface warms near the sun, the ices turn to gas and form a tenuous atmosphere, or coma, measuring hundreds of thousands of miles across. The solar wind pushes this gas back to form a comet's glowing gas tail. X-ray emission is a side effect of this interaction.

The X-rays arise through a process called charge exchange. Fast-moving ions in the solar wind snatch electrons from uncharged atoms in the comet's atmosphere. The solar-wind ions give off X-rays as the relocated electrons settle into their new home. Because the interaction occurs over such a broad region, the total power output of these emissions can reach one billion watts.

Charge exchange may play important roles in any objects where hot, expanding gas collides with cooler gas. One example: Young stars interacting with the gas and planets that might surround them. Comets provide excellent laboratories to explore these interactions.

When Comet 17P/Holmes underwent a surprising outburst in October 2007, Bodewits tasked both Swift and NASA's Chandra X-ray Observatory to observe it. "The comet was too bright to observe with the UVOT. We were afraid we'd damage the instrument," Bodewits says. "Despite this, we're still not sure whether we detected Holmes with the XRT or Chandra."

At the time of the outburst, Holmes was about 19 degrees above the ecliptic, the plane in which the planets orbit the sun. At that elevation, the comet was probably experiencing a cooler, steadier flow from the solar wind. "The source of this cooler flow wasn't hot enough to produce the ions Holmes needed to make X-rays," Bodewits notes.

Four years ago today, Swift captured its first x-rays. The radiation came from Cygnus X-1, one of sky's strongest sources at these energies. The system, located within our galaxy, contains a hot, blue-giant star orbited by a black hole.

"Swift has operated two years longer than we had hoped," says Neil Gehrels, the mission's lead scientist at NASA's Goddard Space Flight Center. "And while gamma-ray bursts and stellar explosions are the satellite's bread and butter, it's clear that Swift has a lot to contribute to other areas of astronomy." Francis Reddy
NASA's Goddard Space Flight Center
› Back To Top