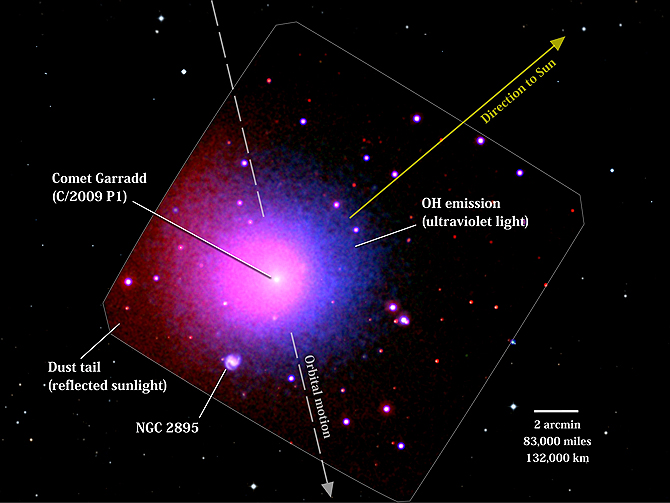 Swift's UVOT acquired this image of Comet Garradd (C/2009 P1) on April 1, 2012, when the comet was 142 million miles away, or 636 times farther than the moon. Red shows sunlight reflected from the comet's dust; violet shows ultraviolet light produced by hydroxyl (OH), a fragment of water. NGC 2895 is a barred spiral galaxy located 400 million light-years away in the constellation Ursa Major. The UVOT image (outlined) is placed within a wider visible image of the region from the Digital Sky Survey. Credit: NASA/Swift/D. Bodewits (UMD) and S. Immler (GSFC) and DSS/STScI/AURA
› View larger
› View unlabeled version

An outbound comet that provided a nice show for skywatchers late last year is the target of an ongoing investigation by NASA's Swift satellite. Formally designated C/2009 P1 (Garradd), the unusually dust-rich comet provides a novel opportunity to characterize how cometary activity changes at ever greater distance from the sun.

A comet is a clump of frozen gases mixed with dust. These "dirty snowballs" cast off gas and dust whenever they venture near the sun. What powers this activity is frozen water transforming from solid ice to gas, a process called sublimation. Jets powered by ice sublimation release dust, which reflects sunlight and brightens the comet. Typically, a comet's water content remains frozen until it comes within about three times Earth's distance to the sun, or 3 astronomical units (AU), so astronomers regard this as the solar system's "snow line."

"Comet Garradd was producing lots of dust and gas well before it reached the snow line, which tells us that the activity was powered by something other than water ice," said Dennis Bodewits, an assistant research scientist at the University of Maryland, College Park, and the study's lead investigator. "We plan to use Swift's unique capabilities to monitor Garradd as it moves beyond the snow line, where few comets are studied."

Comets are known to contain other frozen gases, such as carbon monoxide and dioxide (CO and CO2), which sublimate at colder temperatures and much farther from the sun. These are two of the leading candidates for driving cometary activity beyond the snow line, but phase transitions between different forms of water ice also may come into play.

C/2009 P1 was discovered by Gordon J. Garradd at Siding Spring Observatory, Australia, in August 2009. Astronomers say that the comet is "dynamically new," meaning that this is likely its first trip through the inner solar system since it arrived in the Oort cloud, the cometary cold-storage zone located thousands of AU beyond the sun.

Comet Garradd was closest to the sun on Dec. 23, 2011, and passed within 118 million miles (1.27 AU) of Earth on March 5, 2012. The comet remains observable in small telescopes this month as it moves south though the constellations Ursa Major and Lynx.

Although Swift's prime task is to detect and rapidly locate gamma-ray bursts in the distant universe, novel targets of opportunity allow the mission to show off its versatility. One of Swift's instruments, the Ultraviolet/Optical Telescope (UVOT) is ideally suited for studying comets.

The instrument includes a prism-like device called a grism, which separates incoming light by its wavelength. While Swift's UVOT cannot detect water directly, the molecule quickly breaks up into hydrogen atoms and hydroxyl (OH) molecules when exposed to ultraviolet sunlight. The UVOT detects light emitted by hydroxyl and other important molecular fragments — such as cyanide (CN), carbon monosulfide (CS) and diatomic and triatomic carbon (C2 and C3, respectively) — as well as the sunlight reflected off of cometary dust.

"Tracking the comet's water and dust production and watching its chemistry change as it moves deeper into the solar system will help us better understand how comets work and where they formed," said Stefan Immler, a researcher and Swift team member at NASA's Goddard Space Flight Center in Greenbelt, Md.

Swift last observed the comet on April 1, when it was 1.53 AU away and just past the orbit of Mars. Although detailed results are not yet available, Bodewits estimates that Comet Garradd was shedding about 400 gallons of water each second -- enough to fill an Olympic-size swimming pool in under 30 minutes.

But the water given off by the comet was only about half of the dust mass it produced. Bodewits estimates that each second, Garradd was losing about 7,500 pounds (3.5 metric tons, or about twice the typical mass of a small car) in the form of dust and icy grains.

Thanks to Garradd's brightness and the UVOT's sensitivity and resolution, researchers can monitor the comet when it is beyond the grasp of most ground-based observatories. Plans call for observations at eight different distances from the sun out to about 5.5 AU, which the comet will reach in April 2013.