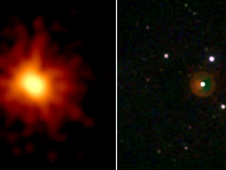 The extremely luminous afterglow of GRB 080319B was imaged by Swift's X-ray Telescope (left) and Optical/Ultraviolet Telescope (right). This was by far the brightest gamma-ray burst afterglow ever seen. Credit: NASA/Swift/Stefan Immler, et al.
> larger image Astronomers are familiar with seeing amazing things through their telescopes. But nothing prepared them for an incredible explosion detected early Wednesday morning by NASA’s Swift satellite. At 2:12 a.m. EDT, Swift detected an explosion from deep space that was so powerful that its afterglow was briefly visible to the naked eye. Even more astonishing, the explosion itself took place halfway across the visible universe!

Never before has anything so far away come even close to naked-eye visibility. The explosion was so far away that it took its light 7,500,000,000 (7.5 billion) years to reach Earth! In fact, the explosion took place so long ago that Earth had not yet come into existence.

"No other known object or type of explosion could be seen by the naked eye at such an immense distance," says Swift science team member Stephen Holland of NASA’s Goddard Space Flight Center in Greenbelt, Md. "We don’t know yet if anyone was looking at the afterglow at the time it brightened to peak visibility. But if someone just happened to be looking at the right place at the right time, they saw the most distant object ever seen by human eyes without optical aid."

If you venture out to a remote location and gaze into the sky on a dark, moonless night, the farthest object you can see with your naked eye is a spiral galaxy called M33. The galaxy is far away by Earthly standards, but it is nearby on a cosmic distant scale. The light from M33 takes 2,900,000 (2.9 million) years to reach Earth, making it thousands of times closer than the March 19 explosion. 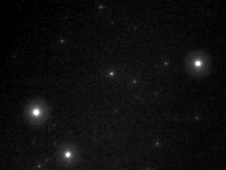 GRB 080319B's optical afterglow appears in the center of this image from Pi of the Sky, a Polish group that monitors the sky for afterglows and other short-lived sources. Credit: Pi of the Sky
> Larger image
> View animation at Pi in the Sky's Web site The explosion itself is called a gamma ray burst, since much of the explosion’s energy was in the form of gamma rays. A gamma ray is a type of light with energy far higher than the light we see with our eyes. Most gamma ray bursts originate when huge stars die and explode. Instead of blowing material in all directions, they channel an incredible amount of energy into two high-speed jets, like turbocharged cosmic blowtorches.

When these jets plow into surrounding clouds of gas, they light up the gas, generating an afterglow that can be seen by telescopes in space and on Earth. The afterglows generally get fairly bright, but never before has an afterglow been visible to the naked eye. The March 19 gamma ray burst’s afterglow was bright enough for about 30 seconds that someone could have seen it without a telescope or binoculars.

"Even by the standards of gamma-ray bursts, this burst was a whopper," says Swift lead scientist Neil Gehrels of NASA Goddard. "It blows away every gamma ray burst we’ve seen so far."

Astronomers have just begun their scientific analysis of the burst, so they do not know yet why it was so powerful, and why the afterglow was so much brighter than other afterglows. Perhaps the burst itself was more energetic than other bursts, or perhaps its jets were very narrow, and were aimed directly at Earth.

Swift normally detects about two gamma ray bursts per week. But March 19 was a special day. The satellite detected four bursts on that day, which is a Swift record for one day. “Coincidentally, the passing of Arthur C. Clarke the day before seems to have set the universe ablaze with gamma ray bursts,” says Swift science team member Judith Racusin of Penn State University in University Park, Pa.