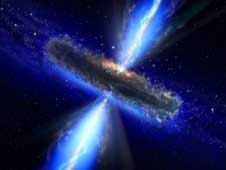 > Larger image
> High resolution image
Swift's Hard X-ray Survey offers the first unbiased census of active galactic nuclei in decades. Dense clouds of dust and gas, illustrated here, can obscure less energetic radiation from an active galaxy's central black hole. High-energy X-rays, however, easily pass through. Credit: ESA/NASA/AVO/Paolo Padovani An ongoing X-ray survey undertaken by NASA's Swift spacecraft is revealing differences between nearby active galaxies and those located about halfway across the universe. Understanding these differences will help clarify the relationship between a galaxy and its central black hole.

"There's a lot we don't know about the workings of supermassive black holes," says Richard Mushotzky of NASA's Goddard Space Flight Center in Greenbelt, Md. Astronomers think the intense emission from the centers, or nuclei, of active galaxies arises near a central black hole containing more than a million times the sun's mass. "Some of these feeding black holes are the most luminous objects in the universe. Yet we don't know why the massive black hole in our own galaxy and similar objects are so dim."

NASA's Swift spacecraft is designed to hunt gamma-ray bursts. But in the time between these almost-daily cosmic explosions, Swift's Burst Alert Telescope (BAT) scans the sky. The survey is now the largest and most sensitive census of the high-energy X-ray sky.

Mushotzky today presented a progress report on the BAT Hard X-ray Survey at the American Astronomical Society meeting in Long Beach, Calif. "The BAT sees about half of the entire sky every day," he says. "Now we have cumulative exposures for most of the sky that exceed 10 weeks." 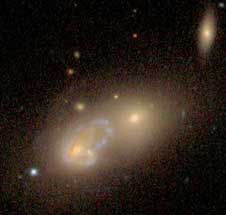 > Larger image
Merging systems account for about 30 percent of the active galaxies cataloged by Swift. This image from the 2m telescope at Kitt Peak National Observatory in Arizona shows NGC 1142, an active galaxy undergoing such a collision. Credit: NASA/Swift/NOAO/Michael Koss (Univ. of Maryland) and Richard Mushotzky Galaxies that are actively forming stars have a distinctly bluish color ("blue and booming"), while those not doing so appear quite red. Nearly a decade ago, surveys with NASA's Chandra X-Ray Observatory and ESA's XMM-Newton showed that active galaxies some 7 billion light-years away were mostly massive "red and dead” galaxies in normal environments.

The BAT survey looks much closer to home, within about 600 million light-years. There, the colors of active galaxies fall midway between blue and red. Most are spiral and irregular galaxies of normal mass, and more than 30 percent are colliding. "This is roughly in line with theories that mergers shake up a galaxy and 'feed the beast' by allowing fresh gas to fall toward the black hole," Mushotzky says.

Until the BAT survey, astronomers could never be sure they were seeing most of the active galactic nuclei. An active galaxy's core is often obscured by thick clouds of dust and gas that block ultraviolet, optical and low-energy ("soft") X-ray light. Dust near the central black hole may be visible in the infrared, but so are the galaxy's star-formation regions. And seeing the black hole's radiation through dust it has heated gives us a view that is one step removed from the central engine. "We're often looking through a lot of junk," Mushotzky says. 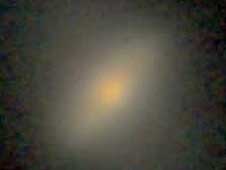 > Larger image
This image shows a typical "red and dead" galaxy as seen by the Kitt Peak 2m telescope. The galaxy shows no sign of active star formation. Its color reddens as existing stars age. Credit: NASA/Swift/NOAO/Michael Koss (Univ. of Maryland) and Richard Mushotzky But "hard" X-rays -- those with energies between 14,000 and 195,000 electron volts -- can penetrate the galactic gunk and allow a clear view. Dental X-rays work in this energy range.

Unlike most telescopes, the Swift's BAT contains no optics to focus incoming radiation. Instead, images are made by analyzing the shadows cast by 52,000 randomly placed lead tiles on 32,000 hard X-ray detectors.

Astronomers think that all big galaxies have a massive central black hole, but less than 10 percent of these are active today. Active galaxies are thought to be responsible for about 20 percent of all energy radiated over the life of the universe, and are thought to have had a strong influence on the way structure evolved in the cosmos.

Swift, launched in November 2004, is managed by NASA Goddard. It was built and is being operated in collaboration with Penn State, the Los Alamos National Laboratory, and General Dynamics in the U.S.; the University of Leicester and Mullard Space Sciences Laboratory in the United Kingdom; Brera Observatory and the Italian Space Agency in Italy; plus additional partners in Germany and Japan. 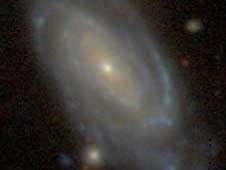