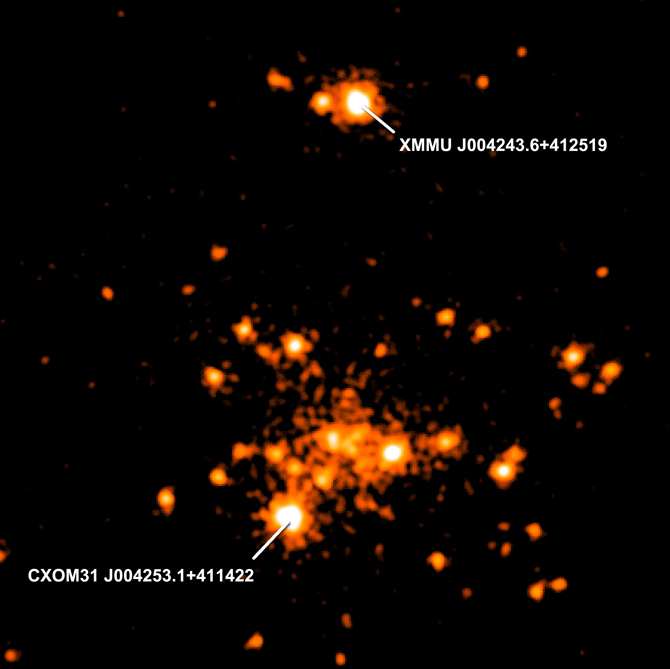 This image from Swift's X-Ray Telescope captures both of the known ULXs in M31. The first, dubbed CXOM31 J004253.1+411422, was discovered with NASA's Chandra X-ray Observatory on Dec. 17, 2009, and appears to be a stellar-mass black hole. The other, named XMMU J004243.6+412519, was discovered just last month, on Jan. 15, by the European Space Agency's XMM-Newton spacecraft. Credit: NASA/Swift/Stefan Immler
› Larger image
› Larger unlabeled image

Researchers using NASA's Chandra X-ray Observatory, Hubble Space Telescope, Swift Gamma-ray Burst Explorer and the European Space Agency's XMM-Newton Observatory have been studying an object known as an ultraluminous X-ray source -- ULX, for short -- in the neighboring Andromeda galaxy (M31). Scientists have long debated the nature of these super-bright X-ray sources, and Chandra's 2009 discovery of a nearby ULX in Andromeda sparked intense interest.

Why are these sources so bright in X-rays? Are they normal stellar-mass black holes gorging on unusually large amounts of gas? Or are they long-sought "intermediate mass" black holes, dozens of times more massive than their stellar counterparts but smaller than the monster black holes found in the centers of most galaxies? 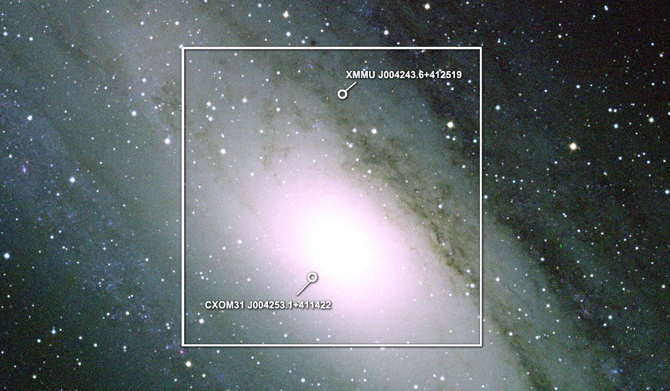 The locations of two M31 ULXs are shown on this optical image of our galactic neighbor. M31 lies 2.5 million light-years away in the constellation Andromeda and is the nearest large spiral galaxy to our own. Under a clear, dark sky, it can be seen as a misty patch with the naked eye. Credit: NASA/Swift; background: Bill Schoening, Vanessa Harvey/REU program/NOAO/AURA/NSF
› Larger image
› Larger unlabeled image

Although astronomers have been studying M31 extensively by X-ray satellites since the 1980s, no ULX had been seen there until 2009.

Adding to the intrigue is a new ULX in M31, discovered just last month by XMM-Newton. Previously, M31's lack of ULXs had suggested to some scientists that these intense beacons didn't form in tranquil spiral galaxies like Andromeda and our own home galaxy, the Milky Way. The appearance of two ULXs within such a relatively short period is truly remarkable.

The Chandra-discovered ULX, dubbed CXOM31 J004253.1+411422, is now the subject of two studies published in the journals Astronomy and Astrophysics and the Monthly Notices of the Royal Astronomical Society. These latest reports suggest that this ULX is a stellar-mass black hole, but one that's consuming great amounts of matter.