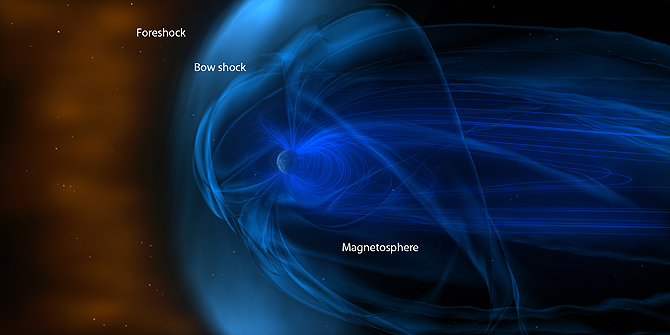 › View larger
› View unannotated version
Earth is surrounded by a giant magnetic bubble called the magnetosphere. As it travels through space, a complex system of charged particles from the sun and magnetic structures piles up in front of it. Scientists wish to better understand this area in front of the bow shock, known as the foreshock, as it can help explain how energy from the rest of space makes its way past this boundary into the magnetosphere. Credit: Credit: NASA/GSFC
As Earth moves around the sun, it travels surrounded by a giant bubble created by its own magnetic fields, called the magnetosphere. As the magnetosphere plows through space, it sets up a standing bow wave or bow shock, much like that in front of a moving ship. Just in front of this bow wave lies a complex, turbulent system called the foreshock. Conditions in the foreshock change in response to solar particles streaming in from the sun, moving magnetic fields and a host of waves, some fast, some slow, sweeping through the region.

To tease out what happens at that boundary of the magnetosphere and to better understand how radiation and energy from the sun can cross it and move closer to Earth, NASA launches spacecraft into this region to observe the changing conditions. From 1998 to 2002, NASA’s Wind spacecraft traveled through this foreshock region in front of Earth 17 times, providing new information about the physics there.

“I stumbled on some cool squiggles in the data,” says Lynn Wilson, who is deputy project scientist for Wind at NASA’s Goddard Space Flight Center in Greenbelt, Md. “They turned out to be a special kind of magnetic pulsations called short large amplitude magnetic structures, which we call SLAMS for short.”

SLAMS are waves with a single, large peak, a little like giant rogue waves that can develop in the deep ocean. By studying the region around the SLAMS and how they propagate, the Wind data showed SLAMS may provide an improved explanation for what accelerates narrow jets of charged particles back out into space, away from Earth. Tracking how any phenomenon catalyzes the movement of other particles is one of the crucial needs for modeling this region. In this case, understanding just how a wave can help initiate a fast-moving beam might also help explain what causes incredibly powerful rays that travel from other solar systems across interstellar space toward Earth. Wilson and his colleagues published a paper on these results in the Journal of Geophysical Research online on March 6, 2013.

The material pervading this area of space – indeed all outer space – is known as plasma. Plasma is much like a gas, but each particle is electrically charged so movement is governed as much by the laws of electromagnetics as it is by the fundamental laws of gravity and motion we more regularly experience on Earth.

“One of the unique things about space weather is how little things can have big effects,” says David Sibeck, a space scientist at Goddard who is a co-author on the paper. “An event might seem small and just generate local turbulence, but it can have profound effects downstream. The front of the magnetosphere is right in the line between sun and Earth, so it’s a crucial place to understand which small things can lead to big results.”

Since the 1970s, researchers have known that particles seem to be reflecting off the magnetosphere, creating intense particle jets called field aligned ion beams, but it’s not been clear how. Now, the Wind data helps provide a more detailed snapshot of how they form, as it travels through a slew of SLAMS and the ion beams.

The scientists’ job was to map where these events happen in space and time and to try to determine which events initiate which. Wilson says that the solar wind constantly moves toward Earth’s bow shock and then reflects off it.

“These structures get excited upstream and they start to grow and steepen, kind of like a water wave,” says Wilson. “But instead of breaking and tumbling over, they stand up, getting bigger and faster.” He says that the SLAMS attempt to move against the gale of solar wind streaming toward them, but ultimately get pushed back, creating a new messy boundary in front of the magnetosphere. “And then they effectively create their own new bow shock,” says Wilson.

Without the SLAMS, one would expect incoming particles from the solar wind to skip and slide along the outside of the bow shock, the way flowing water in a river might move around a large rock. But the SLAMS create a kind of magnetic mirror, causing the solar particles to reflect, attenuating them into one of these field-aligned ion beams, shooting out along magnetic fields back out and away from Earth.

Wind data does not inherently show which of these things create the other, it simply shows the presence of both. However, the ion beams were not seen in the space between the front of the true bow shock and the SLAMS -- only streaming away from the SLAMS out toward space. The beams also only appeared after the SLAMS had a chance to fully form. This strengthened the conclusion that the SLAMS themselves lead to the beams, acting as a magnetic mirror to reflect the particles outward.

The observations also have implications beyond protecting Earth. By sending spacecraft to observe plasma here, scientists can take advantage of the only area of the universe where we can study such plasma movement directly -- and thus apply the research to information about stars across the galaxy as well. For example, astrophysicists would like to better understand what causes cosmic ray acceleration -- particles that are generally much faster than the field aligned ion beams, but accelerated in similar manners, says Wilson. One theory is that a magnetic mirror of some kind causes the particles to bounce back and forth and gain more speed and energy as the mirrors move closer together. Near the front of the magnetosphere, the SLAMS might be doing just that.