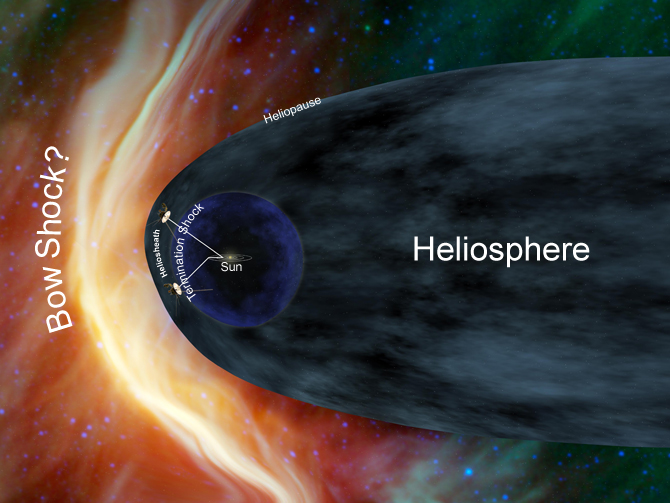 › View larger
This labeled artist's concept shows NASA's two Voyager spacecraft exploring a turbulent region of space known as the heliosheath, the outer shell of the bubble of charged particles around our sun. After more than 33 years of travel, the two Voyager spacecraft will soon reach interstellar space, which is the space between stars. Credit: NASA/JPL-Caltech › View Unannotated version

More than 30 years after they left Earth, NASA's twin Voyager probes are now at the edge of the solar system. Not only that, they're still working. And with each passing day they are beaming back a message that, to scientists, is both unsettling and thrilling.

The message is, "Expect the unexpected."

"It's uncanny," says Ed Stone of Caltech, Voyager Project Scientist since 1972. "Voyager 1 and 2 have a knack for making discoveries."

Today, April 28, 2011, NASA held a press conference to reflect on what the Voyager mission has accomplished--and to preview what lies ahead as the probes prepare to enter the realm of the Milky Way itself.

The adventure began in the late 1970s when the probes took advantage of a rare alignment of outer planets for an unprecedented Grand Tour. Voyager 1 visited Jupiter and Saturn, while Voyager 2 flew past Jupiter, Saturn, Uranus and Neptune. (Voyager 2 is still the only probe to visit Uranus and Neptune.)

When pressed to name the top discoveries from those encounters, Stone pauses, not for lack of material, but rather an embarrassment of riches. "It's so hard to choose," he says.

Stone's partial list includes the discovery of volcanoes on Jupiter's moon Io; evidence for an ocean beneath the icy surface of Europa; hints of methane rain on Saturn's moon Titan; the crazily-tipped magnetic poles of Uranus and Neptune; icy geysers on Neptune's moon Triton; planetary winds that blow faster and faster with increasing distance from the sun.

"Each of these discoveries changed the way we thought of other worlds," he says Stone.

In 1980, Voyager 1 used the gravity of Saturn to fling itself slingshot-style out of the plane of the Solar System. In 1989, Voyager 2 got a similar assist from Neptune. Both probes set sail into the void.

Sailing into the void sounds like a quiet time, but the discoveries have continued.

Stone sets the stage by directing our attention to the kitchen sink. "Turn on the faucet," he instructs. "Where the water hits the sink, that's the sun, and the thin sheet of water flowing radially away from that point is the solar wind. Note how the sun 'blows a bubble' around itself."


There really is such a bubble, researchers call it the "heliosphere," and it is gargantuan. Made of solar plasma and magnetic fields, the heliosphere is about three times wider than the orbit of Pluto. Every planet, asteroid, spacecraft, and life form belonging to our solar system lies inside.

The Voyagers are trying to get out, but they're not there yet. To locate them, Stone peers back into the sink: "As the water (or solar wind) expands, it gets thinner and thinner, and it can't push as hard. Abruptly, a sluggish, turbulent ring forms. That outer ring is the heliosheath--and that is where the Voyagers are now."

The heliosheath is a very strange place, filled with a magnetic froth no spacecraft has ever encountered before, echoing with low-frequency radio bursts heard only in the outer reaches of the solar system, so far from home that the sun is a mere pinprick of light.

"In many ways, the heliosheath is not like our models predicted,” says Stone. 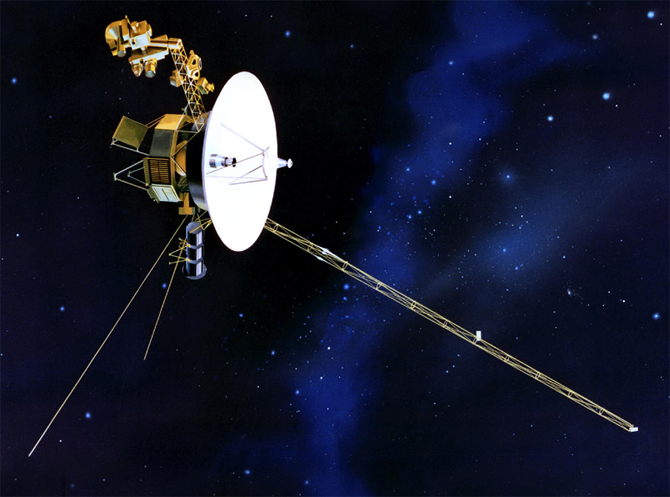 In June 2010 Voyager 1 beamed back a startling number: zero. That's the outward velocity of the solar wind where the probe is now. No one thinks the solar wind has completely stopped; it may have just turned a corner. But which way? Voyager 1 is trying to figure that out through a series of "weather vane" maneuvers, in which V1 turns itself in a different direction to track the local breeze. The old spacecraft still has some moves left, it seems.

No one knows exactly how many more miles the Voyagers must travel before they "pop free" into interstellar space. Most researchers believe, however, that the end is near. "The heliosheath is 3 to 4 billion miles in thickness," estimates Stone. "That means we'll be out within five years or so."

There is plenty of power for the rest of the journey. Both Voyagers are energized by the radioactive decay of a Plutonium 238 heat source. This should keep critical subsystems running through at least 2020.

After that, he says, "Voyager will become our silent ambassador to the stars." 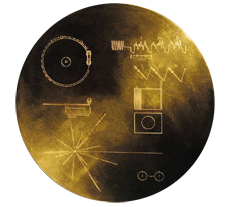 › View larger
Aboard each Voyager spacecraft is a golden record containing a collection of sites, sounds and greetings from Earth. Credit: NASA/JPL
› Explaining the Golden Record Each probe is famously equipped with a Golden Record, literally, a gold-coated copper phonograph record. It contains 118 photographs of Earth; 90 minutes of the world's greatest music; an audio essay entitled Sounds of Earth (featuring everything from burbling mud pots to barking dogs to a roaring Saturn 5 liftoff); greetings in 55 human languages and one whale language; the brain waves of a young woman in love; and salutations from the Secretary General of the United Nations. A team led by Carl Sagan assembled the record as a message to possible extraterrestrial civilizations that might encounter the spacecraft.

"A billion years from now, when everything on Earth we've ever made has crumbled into dust, when the continents have changed beyond recognition and our species is unimaginably altered or extinct, the Voyager record will speak for us," wrote Carl Sagan and Ann Druyan in an introduction to a CD version of the record.

Some people note that the chance of aliens finding the Golden Record is fantastically remote. The Voyager probes won't come within a few light years of another star for some 40,000 years. What are the odds of making contact under such circumstances?

On the other hand, what are the odds of a race of primates evolving to sentience, developing spaceflight, and sending the sound of barking dogs into the cosmos?

› About the Golden Records