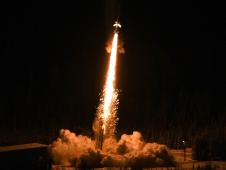 › View larger
On the night of Feb. 6, 2013, a green aurora appeared in the Alaskan night sky. Conditions were finally right to launch VISIONS. Credit: NASA/Goddard/Chris Perry The VISIONS (VISualizing Ion Outflow via Neutral atom imaging during a Substorm) sounding rocket launched successfully at 3:21 a.m. EST on Feb. 7, 2013 from the Poker Flat Research Range in Alaska. Preliminary results show that it was a good flight and Douglas Rowland, the principal investigator for the mission at NASA's Goddard Space Flight Center in Greenbelt, Md. reported that he thought the data looked "fantastic." 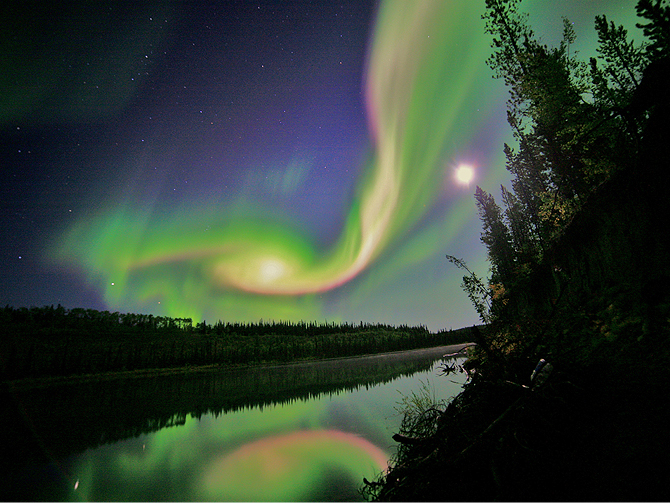 › View larger
Swirls of green and red appear in an aurora over Whitehorse, Yukon on the night of Sep. 3, 2012. NASA's VISIONS sounding rocket will study what makes the aurora, and how it affects Earth’s atmosphere. Image Courtesy of David Cartier, Sr.

On a cold February night in Poker Flat, Alaska, a team of scientists will wait patiently for the exotic red and green glow of an aurora to illuminate the sky. Instead of simply admiring the view, this group from NASA's Goddard Space Flight Center of Greenbelt, Md., and The Aerospace Corporation of El Segundo, Calif. will launch a sounding rocket up through the Northern Lights. The rocket could launch as early as the night of Feb. 2, 2013, but the team has a two-week window in order to find the perfect launch conditions.

Armed with a series of instruments developed specifically for this mission, the VISIONS (VISualizing Ion Outflow via Neutral atom imaging during a Substorm) rocket will soar high through the arctic sky to study the auroral wind, which is a strong but intermittent stream of oxygen atoms from Earth’s atmosphere into outer space. Although the rocket will survive only fifteen minutes before splashing down in the Arctic Ocean, the information it obtains will provide answers to some long-standing questions, says Doug Rowland, who is the VISIONS principal investigator at Goddard.

VISIONS will study how oxygen atoms leave Earth’s atmosphere under the influence of the aurora. Most of the atmosphere is bound by Earth’s gravity, but a small portion of it gets heated enough by the aurora that it can break free, flowing outwards until it reaches near-Earth space. The atoms that form this wind initially travel at about 300 miles per hour -- only one percent of the speed needed to overcome gravity and leave Earth's atmosphere.

“This oxygen would normally never gain enough energy to leave the atmosphere,” says Rowland. “On the other hand, at very high altitudes, satellite experiments have measured oxygen atoms moving faster than 50 miles per second. These experiments have shown that if oxygen can reach these high altitudes, there are plenty of ways for it to gain even more energy, in which case the oxygen atoms can escape near-Earth space entirely. What we don’t know is how the oxygen gets enough energy to fight against gravity and reach the higher altitudes where these slingshots are active.”

To find out what is doing the heavy lifting to kick start the oxygen, Rowland and his team are waiting to launch the rocket during the active phase of an aurora, which only lasts from 20 to 30 minutes. Auroras indicate a dramatic increase in the energy input to the upper atmosphere, creating a golden opportunity for the rocket to study the escaping oxygen, and learn more about what gives the oxygen the energy it needs to escape from Earth.

The VISIONS mission will highlight the advantages of using a sounding rocket instead of a satellite to gather the new information. In addition to being smaller and less expensive, sounding rockets provide vertical profiles of the auroral environment, on both the upleg and downleg portions of their parabolic trajectory, with speeds much less than those of orbiting satellites. Further, rockets can be launched from the right place at just the right time to study the aurora – unlike a satellite that can only encounter an aurora when it flies through it by chance.

To solve the mystery behind the auroral wind, the sounding rocket will use four unique instruments. The key instrument is Goddard’s MIniaturized Low-energy Energetic Neutral Atom imager, known as MILENA, which will directly observe the oxygen flowing out of the atmosphere. 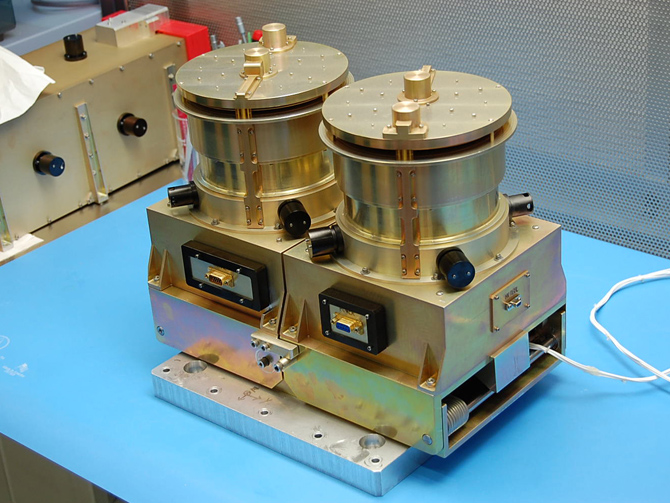 In the past, scientists have only been able to study the up-flowing oxygen on a small scale – because the oxygen is electrically charged, it is confined by Earth’s magnetic field, and instruments can only measure the oxygen close to its source region. The revolutionary MILENA instrument, however, contains twin imagers that can observe the oxygen further along on its journey, after it has stolen an electron from a neutral gas atom in the atmosphere. This allows the oxygen to break free from its magnetic prison and travel a long distance, where it can be detected remotely. By mapping the oxygen, MILENA acts as a type of camera that builds up a picture of the auroral wind using oxygen atoms instead of light.

Although the MILENA instrument itself is new, it already has a successful history. The instrument was modeled after a similar imager known as MINI-ME (for Miniature Imager for Neutral Ionospheric Atoms and Magnetospheric Electrons) that flew on the NASA/U.S. Dept. of Defense FASTSAT (Fast Affordable Science and Technology Satellite) mission, which ended in Nov., 2012, after two years on-orbit.

The other instruments aboard VISIONS, including the Rocket-borne Auroral Imager (RAI), the Fields and Thermal Plasma (FTP) instrument, and the Energetic Electron Analyzer/Energetic Ion Analyzer (EEA/EIA), will work with MILENA to detect where the auroral activity occurs and measure the auroral energy that heats the oxygen. Goddard is providing MILENA and the FTP, while the RAI and EEA/EIA instruments are provided by The Aerospace Corporation of El Segundo, Calif.

NASA’s Wallops Flight Facility in Va., including the NASA Sounding Rocket Operations Contract (NSROC), is providing the rocket and payload support systems. The Poker Flat launch range is operated by the University of Alaska, Fairbanks, under contract to NASA.

Although the VISIONS mission will last only 15 minutes, Michael Collier, a planetary scientist at Goddard who is the MILENA instrument lead, said the information gathered in its short trip will be crucial.

“What we’re doing is launching into a specific period of intense geomagnetic activity,” Collier said. “With VISIONS, it may be the case we’re not getting a whole lot of data, but we get the data we want.”

All they have to do is wait.