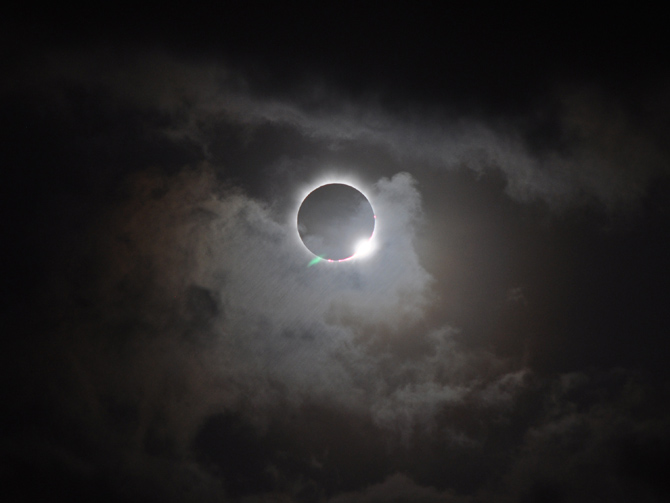 › View larger
A total solar eclipse was visible from the Northern tip of Australia on Nov. 13, 2012 at 3:35 EST. The light halo visible around the edges of the moon is the sun's atmosphere, the corona. Image courtesy of Romeo Durscher

On Nov. 13, 2012, a narrow corridor in the southern hemisphere experienced a total solar eclipse. The corridor lay mostly over the ocean but also cut across the northern tip of Australia where both professional and amateur astronomers gathered to watch.

During a solar eclipse one can see – using appropriate instruments to protect the eyes since you should never look at the sun directly – dim structures around the edges of the sun. These structures are the sun's atmosphere, the corona, which extends beyond the more easily seen surface, known as the photosphere.

In modern times, we know that the corona is constantly on the move. Made of electrified gas, called plasma, the solar material dances in response to huge magnetic fields on the sun. Structural changes in these magnetic fields can also give rise to giant explosions of radiation called solar flares, or expulsions of solar material called coronal mass ejections, CMEs – which make the corona a particularly interesting area to study.