Grow Text SizeShrink Text Size
Sounding Rockets Launch Status
07.15.11: WALLOPS ISLAND, VA – NASA is postponing the launch of two suborbital sounding rockets from the Wallops Flight Facility in Virginia on July 15 to no earlier than 2012. The rockets are carrying experiments to study the ionosphere.

The postponement will allow scientists to review the results from two previous rockets launched from Wallops on July 10 and make adjustments to the project to enhance the science data obtained during the flights.

Further information on the mission is available on the Internet at:


The next launch currently scheduled at the Wallops Flight Facility is a Terrier-Improved Orion suborbital sounding rocket carrying experiments from four universities. The launch is set for 7 to 10 a.m. July 21. The backup launch day is July 22.


07.13.11: NASA has postponed the launch attempt from the Wallops Flight Facility of two suborbital sounding rockets scheduled for Thursday, July 14. The postponement is to allow the project team time review the weather launch commit criteria. The Black Brant V and Terrier-Improved Orion will carry experiments to study the ionosphere. Today’s scheduled attempt was canceled to provide the launch team time to prepare and test the launch vehicles and payloads. The next attempt is no earlier than Friday, July 15 between 9:30 a.m. and 1 p.m EDT.


07.11.11: NASA has scheduled the next launch attempt from the Wallops Flight Facility of two suborbital sounding rockets for 9:30 a.m. to 1 p.m., Wednesday, July 13. The rockets, which will be launched 15 seconds apart, will be carrying experiments to study the ionosphere. Following the successful launches of two similar rockets on Sunday, launch teams today and tomorrow are preparing the next two rockets and payloads for flight. 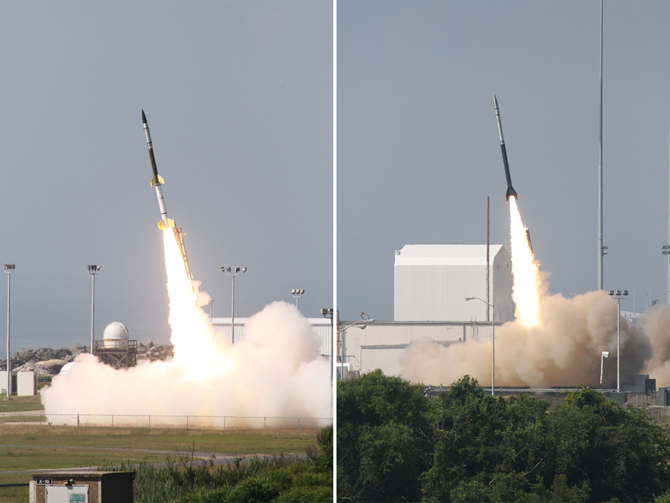 07.10.11: The weather cooperated on Sunday, July 10, and the first two sounding rockets launched at 10 AM ET from NASA's Wallops Flight Facility. The launch came after five days of waiting for perfect conditions to collect good science data in Earth's lower atmosphere – namely clear skies and a strong electric current running through the ionosphere. Such conditions were needed both to measure that current and to track the way neutral winds move through the region.

The second two rockets – which will collect similar data for comparison -- will launch no earlier than July 12, with backup days from July 13 to 23.

07.07.11: NASA’s Wallops Flight Facility has rescheduled the launch of two NASA sounding rockets carrying experiments to study the ionosphere to no earlier than July 9 so that Wallops range assets can support the final launch of the Space Shuttle. The launches have been postponed three times since July 5 because of unacceptable weather. The launch window is 9:30 a.m. to 1 p.m. The backup launch days run through July 23. The rockets may be visible in the Wallops area. The launch will be web cast beginning at 8:30 a.m. on launch day.

07.06.11: The rockets have not yet launched because scientific and weather conditions have not been perfect.


For more information regarding the science for this mission, visit: