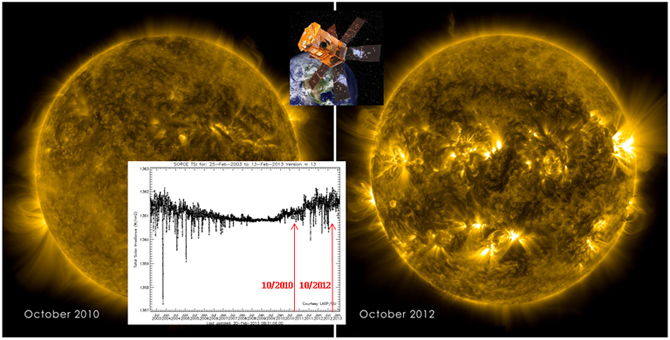 › View larger
TSI data from the SORCE mission, which marked 10 years of data acquisition on March 6, 2013, demonstrates the daily and cyclic variability of the Sun. Credit: NASA/LASP
NASA's Solar Radiation and Climate Experiment (SORCE) satellite has been providing data on the sun's irradiance for 10 years. SORCE measures electromagnetic radiation produced by the sun and the power per unit area of that energy on the Earth's surface.

Top 10 Scientific Achievements
The SORCE mission has: For details on each of these achievements, visit: http://lasp.colorado.edu/sorce/news/2013/2013_news.htm
Source: LASP/Colorado State "SORCE has set a new standard of accuracy, precision, and wavelength range for the sun's irradiance," said Robert Cahalan, SORCE Project Scientist at NASA's Goddard Space Flight Center in Greenbelt, Md. "[It's] a kind of climate gold standard' for the radiative forcing of Earth over the decade of the 2000s, beginning with the dramatic Halloween flares of October-November 2003, through the historically low 2008-2009 minimum of Solar Cycle 23, into the rise of Solar Cycle 24, providing a climate record likely to grow in value for sun and Earth studies over many decades to come."

SORCE was launched during a solar maximum period; as the mission progressed, the sun moved into a solar minimum period that was considerably longer than predicted. The next cycle did finally get started, and solar activity is now nearing its apex for this current cycle (though current observations suggest that the maximum may have a double peak).

Basically, SORCE data has provided scientists a unique understanding of how the sun varies both slowly and rapidly, affecting Earth’s weather and climate systems and ultimately all the life on Earth that depends on the sun's flow of energy.

One of the most important achievements of SORCE was using Total Irradiance Monitor (TIM) data to establish a new baseline level of total solar irradiance (TSI) at the top of Earth's atmosphere of 1360.8 watts per meter squared (W/m2), as determined during the recent solar minimum. That minimum TSI value is known to 0.5 watts-per-meter-squared, or 0.037% (100 x 0.5/1360.8), an unprecedented high degree of accuracy. That value is 0.34% (4.6 W/m2) lower than measured by previous space-based solar monitoring instruments, which include the Active Cavity Radiometer Irradiance Monitor (ACRIM) missions and the Earth Radiation Budget Satellite (ERBS) mission. Two other instrument groups have now come into agreement with SORCE's TSI estimates, including both ACRIMSAT-ACRIM3 and The European Space Agency's PICARD-SOVAP.

TSI is a fundamental variable in the calculation of the sun’s energy input to Earth’s climate system and Earth’s overall energy budget. Extremely accurate measurements of TSI also indicate how much the amount of solar energy reaching the Earth is varying. 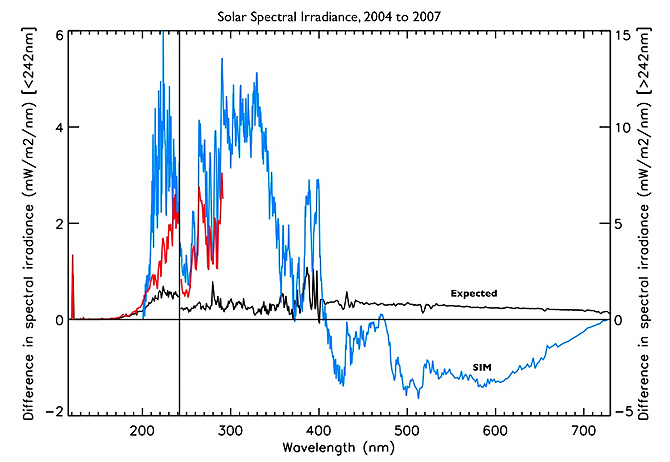 › View larger
Between 2004 and 2007, the Solar Irradiance Monitor (blue line) measured a decrease in ultraviolet radiation (less than 400 nanometers) that was a factor of four to six larger than expected (black line). In the visible part of the spectrum (400 to 700 nanometers), SIM showed a slight increase in comparison to what was expected. Measurements (red) from another ultraviolet radiation-sensing instrument called SOLSTICE compare well with those from SIM. Note: different scales are used for values at wavelengths less and more than 242 nanometers (see left and right axes respectively). Full story: http://www.nasa.gov/topics/solarsystem/features/solarcycle-sorce.html Credit: Joanna Haigh/Imperial College London
Another major achievement of SORCE is that the satellite acquired the first continuous measurements of solar spectral irradiance (SSI) in the 115 to 2400 nanometer spectral (wavelength) range. The visible spectral range (the range that the human eye is sensitive to) is from about 390 nm (violet) to 700 nm (red). Thus, SORCE provides SSI measurements from the ultraviolet to the infrared. SORCE's new, accurate data provide refined inputs to models of the atmosphere and Earth’s climate. 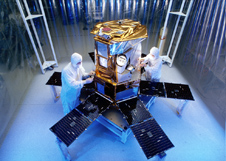 › View larger
The SORCE satellite in a clean room before it launched. Credit: NASA As the ability to model Earth’s climate and atmosphere has advanced, so too, has the need for improved specification of solar irradiance inputs. Most, if not all, state-of-the-art models of Earth’s climate and atmosphere, such as those used for the Intergovernmental Panel on Climate Change’s Fifth Assessment and the Ozone Assessment, now require the SSI—not just the total (spectrally integrated) quantity. Analysis of SORCE spectral irradiance observations and development and validation of models of spectral irradiance variability for use in global change studies is a key science objective of SORCE.

The SORCE mission is managed by the Laboratory for Atmospheric and Space Physics (LASP) at the University of Colorado-Boulder.

For a more in-depth look at SORCE discoveries, visit: