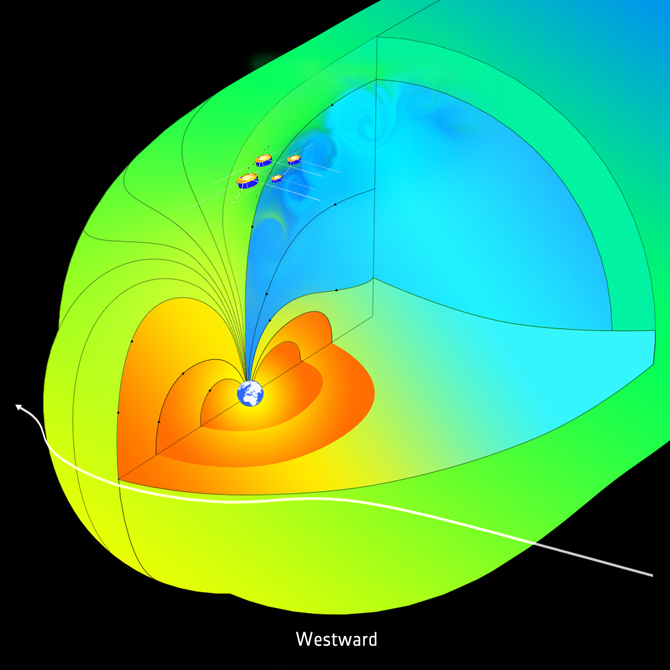 A new study based on data from European Space Agency’s Cluster mission shows that it is easier for the solar wind to penetrate Earth’s magnetic environment, the magnetosphere, than had previously been thought. Scientists from NASA's Goddard Space Flight Center in Greenbelt, Md. have, for the first time, directly observed the presence of certain waves in the solar wind—called Kelvin-Helmholtz waves that can help transfer energy into near-Earth space—under circumstances when previous theories predicted they were not expected.

The recent paper, published on Aug 29, 2012, in the Journal of Geophysical Research shows that the presence of these waves help the incoming charged particles of the solar wind breach the magnetopause—the outer region of the magnetic "shield" around our planet. As a result, the boundary of Earth’s magnetic bubble behaves less like a continuous barrier and more like a sieve allowing entry to the continuous onslaught of energetic electrons and protons.

"The complex environment near Earth varies continuously, but it is always filled with strong and complex magnetic fields. Variations in the pressure of the solar wind and in the orientation of the magnetic field can lead to changes in how the magnetosphere responds to the solar wind," says Melvyn Goldstein, a geospace scientist at Goddard and an author on the paper. "And understanding how the solar wind impacts these changes by transferring material, momentum and energy across the magnetopause, is one of the most important questions in magnetospheric physics in general and space weather effects in particular."

This latest discovery was made possible by the unique configuration of the four identical Cluster spacecraft, which fly in a closely controlled formation through near-Earth space. As they sweep from the magnetosphere into interplanetary space and back again, the flotilla provides unique three-dimensional insights on the processes that connect the sun to Earth.

"The space weather community pays considerable attention to Kelvin-Helmholtz waves," says Kyoung-Joo Hwang, a research scientist at Goddard and the University of Maryland Baltimore County and lead author of the paper. "Because they have global influence on Earth's magnetic system and are important for understanding Earth’s response to changes on the sun." 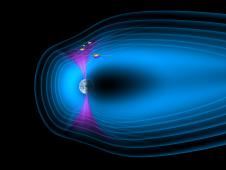 › View larger
The four Cluster spacecraft orbit Earth to observe the giant magnetic bubble around Earth called the magnetosphere. Recent observations show that the steady stream of solar particles and energy from the sun, known as the solar wind, can enter the magnetosphere more easily than previously thought. Credit: ESA/AOES Medialab In general, the solar wind's ability to penetrate into near-Earth space is thought to rely on the magnetic alignment of the interplanetary magnetic fields, often shortened to IMF. As the solar wind streams from the sun toward the day side of Earth, its magnetic fields connect up to those of Earth, resulting in a sudden and dramatic reconfiguration or reconnection of the field lines. This is most efficient when the IMF is aligned southward – opposite to the northward alignment of Earth’s magnetic field. The temporary tangling of the field lines creates ideal conditions for magnetic reconnection, allowing large amounts of plasma and magnetic energy to be transferred from the solar wind to the magnetosphere.

Magnetic reconnection also occurs more weakly with a northward orientation of the IMF, generally only seen at higher latitudes. Spacecraft observations have indicated that Kelvin-Helmholtz waves may play an important role in the transfer of solar wind material into the magnetosphere during a northward IMF – a hypothesis bolstered by the fact that the waves can facilitate magnetic reconnection. However, previous identification of Kelvin-Helmholtz waves during northward IMF were limited to the low latitude flanks of the magnetosphere.

The team of scientists has now directly observed these Kelvin-Helmholtz waves at high latitudes under other orientations of the IMF. Instead of pointing north or south, the IMF was pointing west, towards the dawn side of Earth. Under these conditions, the Cluster data showed the waves on the dusk side of the high-latitude magnetopause. The magnetopause is the boundary between the relatively undisturbed magnetosphere and the magnetosheath, the region containing solar wind plasma that has come across the bow shock that protects Earth from the direct onslaught of solar wind plasma. The scientists were also able to characterize how differences in IMF orientation greatly influenced the Kelvin-Helmholtz waves as a result of variations in the thickness and other characteristics of the boundary layer.

The data were obtained between 7:00 a.m. and noon EST on 12 Jan., 2003. The four Cluster spacecraft were in tetrahedral formation, about 2,500 miles apart, flying close to the northern duskward region of Earth’s magnetosphere. The quartet was outbound, heading toward the evening side magnetopause.

"This was the first time that the presence of Kelvin-Helmholtz waves at the magnetopause had been demonstrated at high latitude for a dawnward orientation of the IMF," said Hwang. "We are seeing these waves in unpredictable places, under solar wind conditions that were previously thought to be unfavorable for their generation."

While the paper reports on only one case study, similar conditions are frequently found in the magnetosphere, says Goldstein. "Since this and similar geometrical orientations of the IMF are common, the process we describe might act as a fairly continuous mechanism of solar wind transport into the magnetosphere." 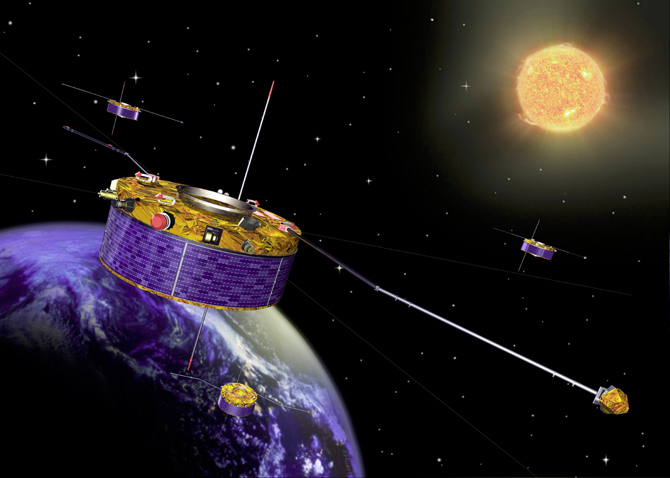 Hwang is now undertaking a statistical study to determine how ubiquitous the Kelvin-Helmholtz waves are and how they evolve and develop.

"This discovery shows how Earth’s magnetosphere can be penetrated by solar particles under certain interplanetary magnetic field conditions," said Matt Taylor, ESA project scientist for Cluster. "The study of the high-latitude, dayside magnetopause would not have been possible without the in-situ measurements sent back by Cluster. The relatively small spatial separation of the four spacecraft made it possible to analyze the spatial structures and characteristics of the Kelvin-Helmholtz waves."

These results are also relevant to studies of magnetospheric processes around other planets in the solar system. For example, Kelvin-Helmholtz instabilities are commonly observed at the boundary of Mercury’s magnetosphere and on the dawnward flank of Saturn’s magnetopause. This new study opens up the possible locations where such waves may be generated, suggesting that they can be a common, and possibly continuous, mechanism for the entry of solar wind into planetary magnetospheres under various IMF orientations.