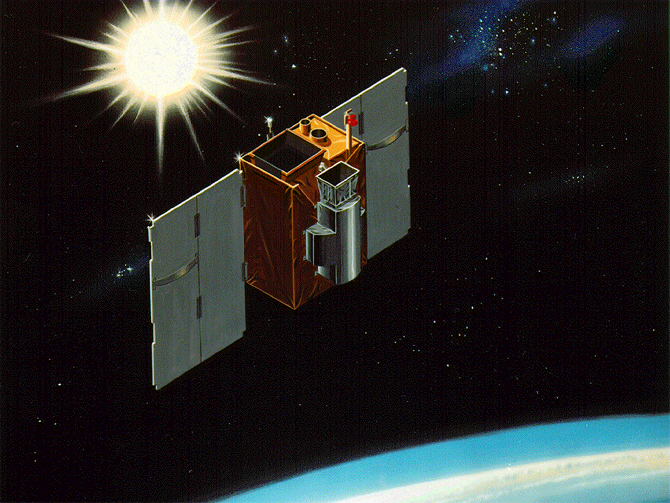 NASA's very first small explorer, the Solar, Anomalous, and Magnetospheric Particle Explorer or SAMPEX, was launched July 3, 1992 to study the zoo of particles and cosmic rays surrounding Earth. Surviving much longer than its expected mission of three years and providing invaluable observations for those who study space weather, the SAMPEX mission is now almost over. In early November, the spacecraft's orbit will decay enough that it will re-enter Earth's atmosphere, burning up completely on re-entry.

When SAMPEX launched, the sun was just finishing the peak of its 11-year solar cycle and beginning to move toward solar minimum. Scientists were eager to watch what happened in near-Earth space in those first few years, as eruptions on the sun shot out energy and solar material and eventually tapered down into a period of quiet. However, those same effects were also predicted to lead to the spacecraft's demise. As the sun once again ramped up to solar maximum around 2000, the sun's output would create enough atmospheric drag that SAMPEX was expected to tumble out of its stable orbit.

Contrary to such predictions, SAMPEX is still in orbit having survived that maximum and continuing in orbit long enough to see the sun move toward another solar max, currently predicted for 2013. But time is running out. As the atmosphere near Earth heats and swells in response to the sun's activity, the expansion of the uppermost atmosphere has encased SAMPEX, slowing it down. Soon the 20-year-old spacecraft will succumb to the very space weather it has helped scientists to study. Some time at the end of 2012, the orbit of the five-by-three-foot craft will spiral far enough in that SAMPEX will re-enter Earth's atmosphere, burning up completely and disappearing forever.

"SAMPEX was launched on a shoe string budget," says Shri Kanekal, a space weather scientist at NASA's Goddard Space Weather Center in Greenbelt, Md. who has been involved with SAMPEX research since its launch. "It was proposed as a minimum one-year mission with a goal of three years, but it lasted for an unexpectedly long time. It has provided 20 years of high quality data, used by nearly everyone who studies near-Earth space."

In its two decades, SAMPEX provided one of the main sources of data on how the radiation environment around Earth changed over time, waxing and waning in response to incoming particles from the sun and galaxy. SAMPEX confirmed earlier theories that cosmic rays streaming in from outer space were being trapped in Earth's own magnetic environment, the magnetosphere, and it helped pinpoint the location where they gathered in a belt around Earth. Another area of research has been to tease out the composition of various particle populations from high-speed and high-energy particles from the sun known as solar energetic particles, to the host of electrons in Earth's middle atmosphere.

Also, SAMPEX has been one of our best eyes on the radiation belts – two giant donuts of radiation surrounding Earth that can affect satellites in orbit during their occasional bouts of swelling. Indeed, scientists are eager for SAMPEX data still, eking out the last weeks of observation time to compare with early data from the Radiation Belt Storm Probes (RBSP) mission that launched in August, 2012. 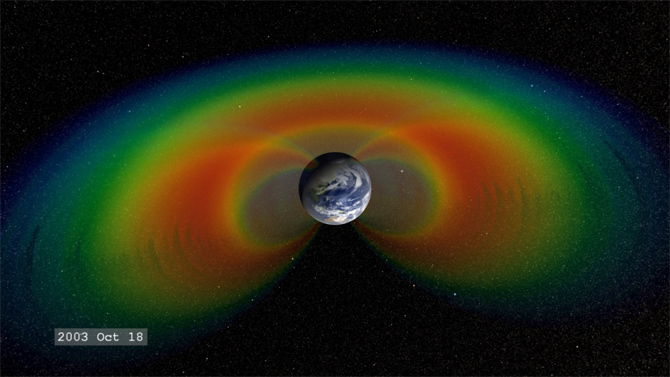 › View larger
SAMPEX data have provided some of the most useful observations of the Van Allen Belts -- two rings of radiation around Earth. This SAMPEX data shows the belts during what's known as the Halloween Storms in October 2003, a time when the radiation belts around Earth swelled so much that they merged into a single ring. Credit: NASA/Goddard Space Flight Center

When those who study the radiation belts realized how imminent was the demise of SAMPEX, they adjusted the schedule to turn on a SAMPEX-compatible instrument aboard RBSP, an instrument called Relativistic Electron Proton Telescope (REPT), earlier than planned. One of the space phenomena that SAMPEX has helped categorize is something called microbursts, an intense but short lived phase during which electrons drop out of the radiation belts. From its viewpoint under the radiation belts, SAMPEX can still record such microbursts. As part of RBSP, on the other hand, REPT can look at the electron population while traveling through the radiation belts proper. In combination, the data may help show what occurrences in the radiation belts correlate to the rain of electrons, the microbursts.

"Since one of the main goals of RBSP is to understand why and how electrons rain down out of the radiation belts, this will be important science," says Kanekal. "It's made all the more impressive that we can do this kind of research despite the fact that SAMPEX's science mission officially ended in 2004."

Although the spacecraft has remained in orbit, the official SAMPEX science mission ended in June 2004. New data remained available, however, thanks to The Aerospace Corporation of El Segundo, Calif., which continued to fund costs to download data, and to Bowie State University in Bowie, Md., which operated the spacecraft to maintain the download process as an educational tool for its students. Kanekal was also instrumental in getting a grant to process all the data from 2004 to 2012, so it will be usable by the science community.

NASA's first small explorer had an impressive run, far outliving its planned three-year mission. It provided data crucial to understanding how the space around Earth responds to space weather from the sun and will continue to do so up until the moment it re-enters Earth's atmosphere, disappearing forever.