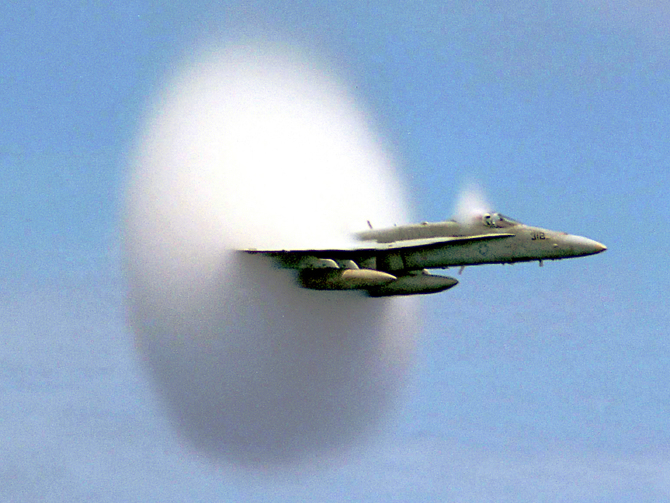 › View larger
A cloud forms as this F/A-18 Hornet aircraft speeds up to supersonic speed. Aircraft flying this fast push air up to the very limits of its speed, forming what's called a bow shock in front of them. Similar bow shocks are also found in a variety of forms in space, and new research suggests they may contribute to heating of the material around them. Credit: Ensign John Gay, USS Constellation, U.S. Navy

Throughout the universe more than 99 percent of matter looks nothing like what's on Earth. Instead of materials we can touch and see, instead of motions we intuitively expect like a ball rolling down a hill, or a cup that sits still on a table, most of the universe is governed by rules that react more obviously to such things as magnetic force or electrical charge. It would be as if your cup was magnetized, perhaps attracted to a metal ceiling above, and instead of resting, it floats up, hovering somewhere in the air, balanced between the upward force and the pull of gravity below.

This material that pervades the universe, making up the stars and our sun, and also – far less densely, of course – the vast interstellar spaces in between, is called plasma. Plasmas are similar to gases, and indeed are made of familiar stuff such as hydrogen, helium, and even heavier elements like iron, but each particle carries electrical charge and the particles tend to move together as they do in a fluid. Understanding the way the plasma moves under the combined laws of motion we know on Earth and the less intuitive (to most Earthlings, at least) electromagnetic forces, lies at the heart of understanding the events that spur giant explosions on the sun as well as changes in Earth's own magnetic environment – the magnetosphere.

Understanding this mysterious world of plasma, however, is not easy. With its complex rules of motion, the study of plasmas is rife with minute details to be teased out.

"Which particles are moving, what is the source of energy for the motion, how does a moving wave interact with the particles themselves, do the wave fields rotate to the right or to the left – all of these get classified," says Lynn Wilson who is a space plasma physicist at NASA's Goddard Space Flight Center in Greenbelt, Md.

Wilson is the first author of a paper in Geophysical Research Letters that was published on April 25, 2012. Using data from the WAVES instrument on NASA's Wind mission, he and his colleagues have discovered evidence for a type of plasma wave moving faster than theory predicted it could move. The research suggests that a different process than expected, electrical instabilities in the plasma, may be driving the waves. This offers scientists another tool to understand how heat and energy can be transported through plasma.

For the study, Wilson examined coronal mass ejections (CMEs) – clouds of solar material that burst off the sun and travel through space -- that move so much faster than the background solar wind that they create shock waves. These shock waves are similar to those produced by a supersonic jet when it moves faster than the speed of sound in our atmosphere.

"A bow shock is a little like a snow plow," says Adam Szabo, a space scientist at Goddard who is a co-author on the paper and also the project scientist for Wind. "The wave picks up particles that are traveling more slowly and speeds them up, piling them up in front as it moves."

Of course, the snow plow is a non-magnetic analogy, and that's where things get sticky. With a snow plow one would never expect a cloud of snowflakes to magically lift up from the shock and begin to speed ahead, streaming down the street faster than the rest of the plow's pile. But in the magnetized gas ahead of the shock, Wind observed a large wave in the plasma – a wave moving faster than it should be able to travel if it had been made by the shock.

The wave in this case is called a Whistler wave. (Classification, for those who want the nitty gritty: an electromagnetic wave, carried by electrons, right polarized, propagates obliquely to the magnetic field.) Since the wave couldn't be created by the shock, the Wind observations suggest that perhaps the waves are created by instabilities out in front of the shock. This is not in itself surprising. The Wind data used by Wilson can measure magnetic field information at 1875 samples per second and new qualities of observations always produce new sights. But the team is surprised by how large the waves are.

"The waves are massive," says Wilson. "They are almost as big as the shock itself."

Such size means the waves may play a larger role than previously thought in the quest to understand the ways that different types of energy converts from one form to another. In this context, two kinds of energy are of interest: bulk kinetic energy, which relates to the collective movement of a bulk of particles, and random kinetic energy, which relates to the speeds at which particles move with respect to each other. Increased random kinetic energy is, in fact, the very definition of heating, since temperature measurements are a characterization of how fast particles are moving within any given material. Large amplitude Whistler waves are known to cause both bulk acceleration and an increase in random kinetic energy, that is, the very temperature of a material.

So, this suggests that shocks and the instabilities they create may play a larger role in transferring the energy from the plasma's bulk movement into heat, than previously thought. Wilson believes that the instabilities caused something called perpendicular ion heating – a process that increases the random kinetic energy of the positively-charged ions in a direction perpendicular to the background magnetic field. The waves also added energy to the negatively-charged electrons -- with the greatest effects observed not being heating, the random kinetic energy, but bulk acceleration in a direction parallel to the magnetic field.

"The same type of wave-particle interaction is thought to happen in solar flares, the heating of the sun's corona, and supernova blast waves," says Wilson. "All of these energizations have very similar properties. Now we have evidence that these Whistler-like fluctuations may be causing heating in all these places."

Understanding the mechanics behind all these events requires collating and categorizing an entire zoo of waves and processes. Wilson's work may be but one piece of a larger puzzle, but together, teasing out the motions of plasmas will help scientists describe the laws of motion that govern the entire universe.