On February 5, 2002, NASA launched what was then called the High Energy Solar Spectroscopic Imager (HESSI) into orbit. Renamed within months as the Ramaty High Energy Solar Spectroscopic Imager (RHESSI) after Reuven Ramaty, a deceased NASA scientist who had long championed the mission, the spacecraft's job was to observe giant explosions on the sun called solar flares.

During a solar flare, the gas soars to over 20 million degrees Fahrenheit, and emits X-rays that scientists can use as fingerprints to study these events on the sun. X-rays cannot penetrate Earth's atmosphere, however, so RHESSI observes them from space. Its goal is simple: to understand how the sun so efficiently shoots out such huge amounts of energy and particles.

Ten years since its launch, RHESSI has observed more than 40,000 X-ray flares, helped craft and refine a model of how solar eruptions form, and fueled additional serendipitous science papers on such things as the shape of the sun and thunder-storm-produced gamma ray flashes.

RHESSI is in a class of NASA spacecraft called Small Explorers – missions that cost under $120 million with highly focused research goals. Launching just after the sun reached its period of maximum activity, known as solar maximum, in 2001, RHESSI was poised to see many explosive bursts of energy from the sun, including both solar flares and another eruption of solar material called coronal mass ejections. 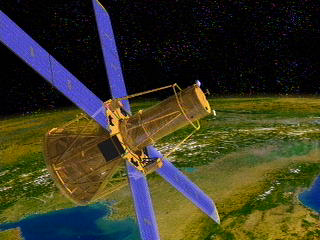 "Except, thanks in part to RHESSI, we don't even separate the biggest explosions into categories like that anymore," says Brian Dennis, the mission scientist for RHESSI at NASA's Goddard Space Flight Center in Greenbelt, Md. "RHESSI has taught us that 'Thou shalt instead say Solar Eruptive Events.' Now we know that one burst of energy in the sun's atmosphere creates both kinds of eruptions. Part of the energy shoots into the sky and becomes a CME (coronal mass ejection). Part of the material is driven down to the sun's surface and appears as the flare. RHESSI's 10 years of observations have helped fill in the holes in this picture."

To accomplish this, RHESSI made use of its one, and only one, instrument, which records both X-rays and even shorter wavelengths of light, gamma rays. The instrument combines high-resolution solar images with "spectroscopic" images that delineate the spectrum of energy coming from any particular point in the image. Together, this helps physically map out energy levels during an explosive event on the sun, as well as track the energy's movement.

For example, to understand how a solar flare forms, one has to understand where the energy to power it comes from. Early RHESSI observations of a flare on April 15, 2002, showed two X-ray sources – one higher in the sun's atmosphere and one lower. RHESSI's unique spectroscopic imaging capability allowed scientists to interpret this to mean that a huge energy release had originally happened between the two spots: that crucial initiation in the current picture of solar eruptions where a single energy burst in the sun's atmosphere, creates both a CME and a flare.

Since RHESSI observes gamma rays as well as X-rays, it has been able to compare how events emit these two forms of radiation. X-rays generally represent electron activity and gamma rays represent activity from protons and other heavier charged particles called ions, so comparing both helps show how different particle populations move around. Scientists have spotted several flares, including their first one using RHESSI in October 2003, where the gamma rays and X-ray sources do not line up. Such a spatial difference was entirely unexpected and suggests that different circumstances guide the movements of different particle populations.

"This opens up new questions for our model," says Dennis. "The electrons and ions have different masses, but we'd still expect them to appear at the same locations in the flare. Perhaps the ions are accelerated in a different way and end up traveling on different magnetic field lines from the electrons."

In addition to observations of giant solar flares, RHESSI has observed more than 25,000 of a smaller version, known as microflares. These much smaller energy releases are also believed to play a role in how the sun transports energy from its surface up into its atmosphere. RHESSI has found that such flares all occur in active regions over the same range of latitudes on the sun as for the bigger events, so perhaps they are just smaller versions of the same phenomenon. 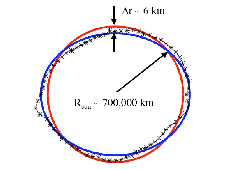 › View larger
This diagram shows the sun’s oblateness (in blue) magnified 1000 times, so the difference from a true sphere (in red) is visible. The blue curve traces the sun's shape averaged over a three month period. The black asterisked curve traces a shorter 10-day average. The wiggles in the 10-day curve are real, caused by strong magnetic ridges in the vicinity of sunspots. Credit: NASA
› Read more Another interesting result from RHESSI has nothing to do with flares at all, but with the very shape of the sun. Due to its spin, one expects the sun to be slightly flattened and not a perfect sphere, much the same as the slight flattening of the Earth. Pre-RHESSI measurements of the sun, however, showed it to be much flatter than physics would dictate, raising questions of whether scientists had overlooked some fundamental piece of information about the sun's rotation.

RHESSI helped by providing information simply gathered as part of its constant assessment of where its instrument points. To keep perfectly oriented, RHESSI precisely records the position of the sun's horizon, or "limb," some 16 times per second. With such an extensive collection of data, scientists could determine the best ever measurement of the sun's shape. This data suggests the true shape more closely matches what physics predicts.

RHESSI's monitoring of gamma rays throughout the sky also made it a prime tool to measure what are called terrestrial gamma-ray flashes (TGFs), bursts of gamma rays emitted from high in the Earth's atmosphere over lightning storms. The first of these had been spotted before, but RHESSI showed that they are more common and more luminous than previously thought. With RHESSI's help, scientists soon realized they occurred upwards of 50 times per day. Indeed, current numbers suggest there may be as many as 400 TGFs daily from thunderstorms at different locations around the world.

"RHESSI made great strides by taking the first high-resolution movies of flares using their high energy radiation," says Dennis. "The original mission was only for two years and we quickly achieved our initial science goals – but RHESSI didn't stop there. The mission has been extended several times, and this small mission just keeps going and going, collecting great data."

In 2009, NASA extended the mission yet again. Now scientists are working to integrate RHESSI flare observations with data from other solar telescopes such as the Solar TErrestrial RElations Observatory (STEREO), Solar Dynamics Observatory (SDO), SOlar and Heliophysics Observatory (SOHO), and Hinode as they watch the sun's activity rise toward yet another solar maximum, currently predicted for 2013.

The Explorers Program Office at Goddard provides management and technical oversight for the RHESSI mission under the direction of NASA's Science Mission Directorate in Washington, D.C.

For more information about the mission, go to: