NASA's Radiation Belt Storm Probes are flying in Earth orbit after a successful liftoff and ascent this morning. The probes launched aboard a United Launch Alliance Atlas V rocket at 4:05 a.m. EDT after a smooth countdown at Cape Canaveral Air Force Station in Florida. The probes were released from the rocket's Centaur upper stage one at a time and sent off into different orbits, kicking off the two-year mission to study Earth's radiation belts.

"I'm very happy to report that we have two happy spacecraft on orbit," said Rick Fitzgerald, RBSP project manager from the Johns Hopkins University Applied Physics Laboratory, which is managing the mission for NASA. "Many thanks to ULA and Launch Services Program for getting us on orbit, giving us a great ride and injecting us in exactly the orbit that we wanted to be in."

During the RBSP mission, the identical twin spacecraft will fly in separate orbits throughout the inner and outer Van Allen radiation belts that encircle the Earth. The sun influences the behavior of the radiation belts, which in turn can impact life on Earth and endanger astronauts and spacecraft in orbit.

"Today, 11 years of hard work was realized by the science team as a number of us stood together watching the rocket lift off the pad," said Nicky Fox, RBSP deputy project scientist from APL. "(The spacecraft) are now at home in the Van Allen belts where they belong, and we can all finally breathe out now that solar panels are out on both of them."

The spacecraft will go through a 60-day commissioning period before beginning its prime mission.

"Now that the spacecraft are safely in orbit, the real fun begins," said Mike Luther, deputy associate administrator for the Science Mission Directorate at NASA Headquarters in Washington. "After the commissioning period, we get to then begin to perform the most detailed study of Earth's radiation belts that's ever been undertaken." 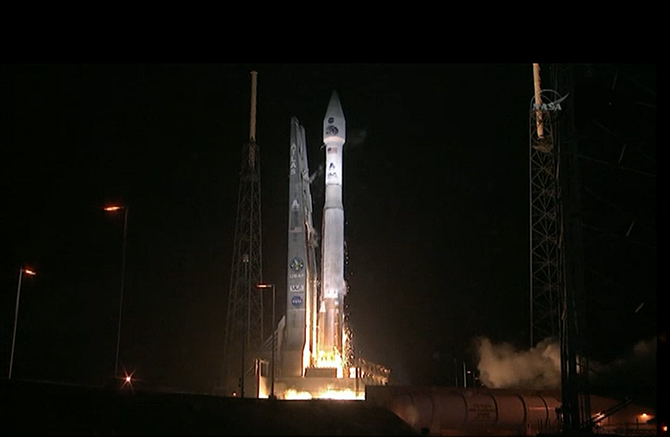 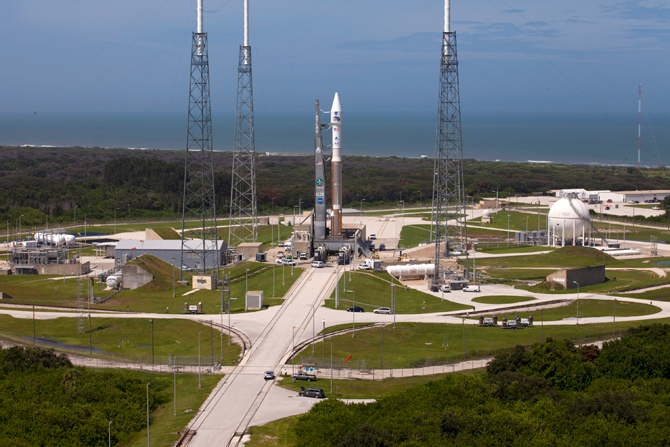 At Cape Canaveral's Space Launch Complex-41, loading of the RP-1 fuel aboard the United Launch Alliance Atlas V first stage was finished last night. Though it was completed late, at 9:30 p.m. EDT, due to weather conditions, launch preparations are on schedule this morning. The launch of NASA's Radiation Belt Storm Probes (RBSP) has been confirmed on the Eastern Range for 4:05 a.m. Thursday. NASA’s Launch Services Program at Kennedy Space Center is responsible for launch management.

NASA Television coverage of RBSP launch will begin at 1:30 a.m.

The terminal countdown to load the cryogenic liquid oxygen and liquid hydrogen into the rocket will begin at 1:35 a.m. The launch weather forecast has improved with a 30 percent chance of not meeting the launch weather criteria on Thursday morning due to cloud conditions.

Hurricane Isaac is near the Louisiana coast and will slowly track Northwest and North over the next several days. Although some drying is expected today, afternoon and evening thunderstorms are expected. Over the next 24 hours, a trough pushes into South Georgia and North Florida and becomes stationary. For launch, the stalled trough to the North causes concerns for isolated showers and thick clouds during the count and window. Our primary concerns for launch Thursday morning are cumulus clouds and thick cloud. Friday, the trough washes out and easterly flow sets in causing concern for morning coastal showers. The primary concerns for launch Friday are cumulus clouds and thick cloud.

RBSP will explore changes in Earth's space environment caused by the sun -- known as space weather -- that can disable satellites, create power-grid failures and disrupt GPS service. The mission also will provide data on the fundamental radiation and particle acceleration processes throughout the universe.

To learn more about the RBSP mission, visit, http://www.nasa.gov/rbsp

Stay up to date through NASA's RBSP social media sites: 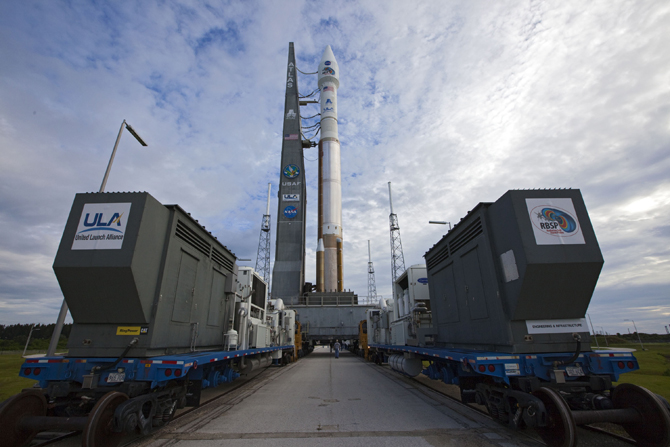 Activity at Space Launch Complex-41 is on schedule for the rollout of the United Launch Alliance Atlas V rocket with NASA's Radiation Belt Storm Probes. First motion today is planned for 2 p.m. EDT. Once at the pad, preparations will begin for the loading of storable propellant aboard the Atlas booster. The first-stage fuel is RP-1, a highly refined kerosene. Liquid oxygen is planned to start flowing into the Atlas V when the terminal countdown begins at 1:35 a.m. on Thursday.

Liftoff is targeted for 4:05 a.m. at the start of a 20-minute window. At this time, there is a 60 percent chance favorable weather criteria at launch time, with clouds the primary concern.

For the latest on RBSP activities, visit: http://www.nasa.gov/rbsp 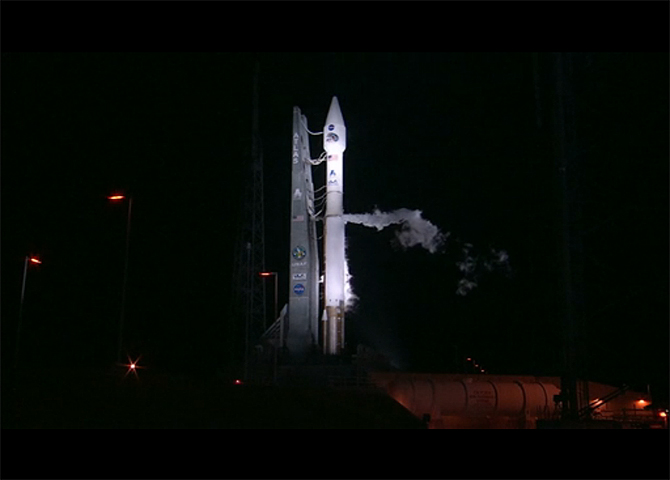 › View larger
Screen capture from NASA TV of the Atlas V carrying RBSP on the launch pad at the time of the announcement that the launch would be scrubbed. Credit: NASA TV

The launch of an Atlas V carrying NASA’s Radiation Belt Storm Probes (RBSP) payload was scrubbed today due to weather conditions associated with lightning, as well as cumulus and anvil clouds. With the unfavorable weather forecast as a result of Tropical Storm Isaac, the leadership team has decided to roll the Atlas V vehicle back to the Vertical Integration Facility to ensure the launch vehicle and twin RBSP spacecraft are secured and protected from inclement weather. Pending approval from the range, the launch is rescheduled to Thursday, Aug. 30 at 4:05 a.m. Eastern Daylight Time.

The next launch attempt currently is scheduled for Sunday at 4:07 a.m. EDT. Launch managers will meet today at 6 a.m. to assess future launch opportunities and evaluate all of the factors, including the status of the rocket and spacecraft, and the weather. An update will be provided at the conclusion of the meeting..

Launch managers at Cape Canaveral Air Force Station in Florida have scrubbed the planned liftoff of the United Launch Alliance Atlas V carrying NASA's Radiation Belt Storm Probes due to an issue with Eastern Range beacon indications. The next launch attempt is scheduled for tomorrow, Aug. 25, at 4:07 a.m. EDT. Like today, the launch window will extend for 20 minutes.

The launch of an Atlas V carrying NASA’s Radiation Belt Storm Probes satellite is being delayed 24 hours. An anomalous engine condition was identified during testing of another Atlas vehicle at the Factory in Decatur, Ala., and the delay will allow additional time for engineers to complete their assessments and verify that a similar condition does not exist on the RBSP launch vehicle engine.

The launch is rescheduled for Friday, Aug. 24 from Space Launch Complex-41 at Cape Canaveral Air Force Station, Fla. The opening of the launch window is 4:07 a.m. EDT. The forecast for Aug. 24 shows a 60 percent chance of favorable weather conditions for the launch.