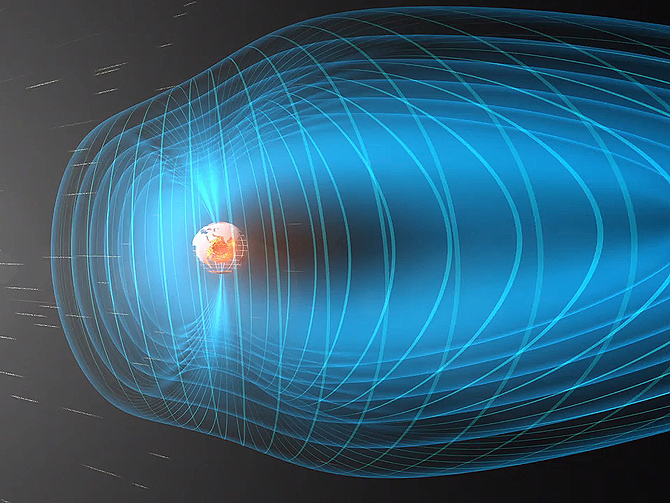 › View larger
A constant stream of particles and electromagnetic waves streams from the sun toward Earth, which is surrounded by a protective bubble called the magnetosphere. A scientist at NASA Goddard has recently devised, for the first time, a set of equations that can help describe waves in the solar wind known as Alfven waves. Credit: European Space Agency (ESA)
Many areas of scientific research -- Earth's weather, ocean currents, the outpouring of magnetic energy from the sun -- require mapping out the large scale features of a complex system and its intricate details simultaneously.

Describing such systems accurately, relies on numerous kinds of input, beginning with observations of the system, incorporating mathematical equations to approximate those observations, running computer simulations to attempt to replicate observations, and cycling back through all the steps to refine and improve the models until they jibe with what's seen. Ultimately, the models successfully help scientists describe, and even predict, how the system works.

Understanding the sun and how the material and energy it sends out affects the solar system is crucial, since it creates a dynamic space weather system that can disrupt human technology in space such as communications and global positioning system (GPS) satellites.

However, the sun and its prodigious stream of solar particles, called the solar wind, can be particularly tricky to model since as the material streams to the outer reaches of the solar system it carries along its own magnetic fields. The magnetic forces add an extra set of laws to incorporate when trying to determine what's governing the movement. Indeed, until now, equations for certain aspects of the solar wind have never been successfully devised to correlate to the observations seen by instruments in space. Now, for the first time, a scientist at NASA's Goddard Space Flight Center in Greenbelt, Md., has created a set of the necessary equations, published in Physical Review Letters on Dec. 4, 2012.

"Since the 1970s, scientists have known that movement in the solar wind often has the characteristics of a kind of wave called an Alfvén wave," says Aaron Roberts, a space scientist at Goddard. "Imagine you have a jump rope and you wiggle one end so that it sends waves down the rope. Alfvén waves are similar, but the moving rope is a magnetic field line itself."

The Alfvén waves in this case tended to have great consistency in height -- or amplitude, which is the common term when talking about waves -- but they are random in direction. You might think of it like a jump rope twirling, always the same distance from center, but nonetheless able to be in many places in space. Another way scientists have envisioned the waves is as a "random walk on a sphere." Again, always the same distance from a given center, but with a variable placement.

Such metaphorical descriptions are based on what instruments in space have, in fact, observed when they see magnetic waves go by in the solar wind. But it turns out that the equations to describe this kind of movement -- equations necessary to advance scientific models of the entire system -- were not easily found.

"The puzzle has been to figure out why the amplitude is so constant," says Roberts. "But it's been very difficult to find equations that satisfy all the characteristics of the magnetic field."

Similar waves are, in fact, seen in light, known as polarized waves. But magnetic fields have additional constraints on what shapes and configurations are even possible. Roberts found a way to overlap numerous waves of different wavelengths in such a way that they ultimately made the variation in amplitude as small as possible.

To his surprise, the equations Roberts devised matched what was observed more closely than he'd expected. Not only did the equations show waves of constant amplitude, but they also showed occasional random jumps and sharp changes -- an unexplained feature seen in the observations themselves.

"Overlapping the waves in this way gives us a way of writing down equations that we didn't have before," says Roberts. "It also has this nice consequence that it is more realistic than we expected, since it shows discontinuities we actually see in the wind. This is important for simulations and models where we want to start with initial conditions that are as close to the observed solar wind as we can get."

Of course, having an equation doesn't yet tell us the reason why the waves in the solar wind are shaped in this way. Nonetheless, equations that describe how the waves move open the door to increasingly accurate simulations that may well help explain such causes. By alternately improving models and improving observations, scientists continue the cyclic nature of such research, until just what physical action on the sun causes these curiously-shaped Alfvén waves someday becomes clear.