Science nuggets are a collection of early science results, new research techniques, and instrument updates that further our attempt to understand the sun and the dynamic space weather system that surrounds Earth. 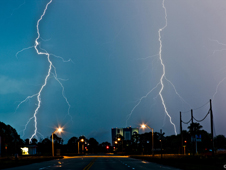 › View larger
Lightning lights up the Vehicle Assembly Building at NASA's Kennedy Space Center in Florida during thunderstorms on Monday, Sept. 27, 2010. Image Courtesy of Tom Moler Every second, lightning flashes some 50 times on Earth. Together these discharges coalesce and get stronger, creating electromagnetic waves circling around Earth, to create a beating pulse between the ground and the lower ionosphere, about 60 miles up in the atmosphere. This electromagnetic signature, known as Schumann Resonance, had only been observed from Earth's surface until, in 2011, scientists discovered they could also detect it using NASA's Vector Electric Field Instrument (VEFI) aboard the U.S. Air Force's Communications/Navigation Outage Forecast System (C/NOFS) satellite.

In a paper published on May 1 in The Astrophysical Journal, researchers describe how this new technique could be used to study other planets in the solar system as well, and even shed light on how the solar system formed.

"The frequency of Schumann Resonance depends not only on the size of the planet but on what kinds of atoms and molecules exist in the atmosphere because they change the electrical conductivity," says Fernando Simoes, the first author on this paper and a space scientist at NASA's Goddard Space Flight Center in Greenbelt, Md. "So we could use this technique remotely, say from about 600 miles above a planet's surface, to look at how much water, methane and ammonia is there."

Water, methane and ammonia are collectively referred to as "volatiles" and the fact that there are different amounts on different planets is a tantalizing clue to the way the planets formed. Determining the composition of a planet's atmosphere can be done with a handful of other techniques – techniques that are quite accurate, but can only measure specific regions. By looking at the Schumann Resonance, however, one can get information about the global density of, say, water around the entire planet. Simoes and his colleagues believe that combining this technique with other instruments on a spacecraft's visit to a planet could provide a more accurate inventory of the planet's atmosphere.

"And if we can get a better sense of the abundance of these kinds of atoms in the outer planets," says Simoes, "We would know more about the abundance in the original nebula from which the solar system evolved."

Accurate descriptions of planetary atmospheres might also help shed light on how the evolution of the solar system left the outer planets with a high percentage of volatiles, but not the inner planets.

Detecting Schumann Resonance from above still requires the instruments to be fairly close to the planet, so this technique couldn't be used to investigate from afar the atmospheres of planets outside our solar system. Instead, scientists imagine something much more dramatic. After a spacecraft is finished observing a planet, it could continue to detect Schumann resonance as it begins its death dive into the atmosphere. During the process of self-destruction, the spacecraft would still provide valuable scientific data until the very last minute of its existence.
Karen C. Fox
NASA's Goddard Space Flight Center


Find this article at: http://www.nasa.gov/mission_pages/sunearth/news/lightning-planets.html