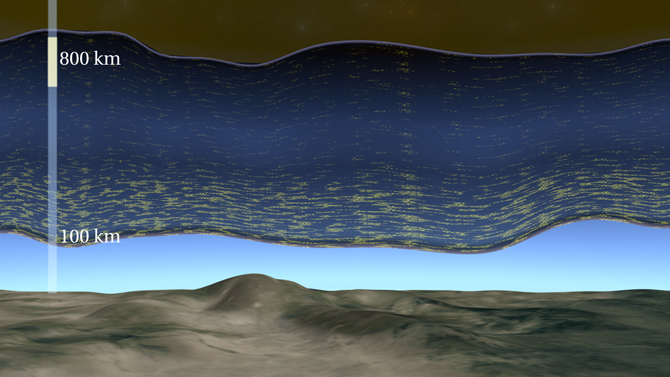 › View larger
Some of the first results from the International Space Weather Initiative focus on the ionosphere – the region of the atmosphere from 60 to 500 miles (100-800 km) up above the surface of Earth. Filled with charged particles, the ionosphere changes in response to incoming energy from the sun or lightning and can disrupt communication signals traveling through it. Credit: NASA/GSFC

In 2009, as a follow up to the International Heliophysical Year of 2007, a group of scientists at NASA’s Goddard Space Flight Center in Greenbelt, Md., had an idea to dramatically increase heliophysics observatories around the world. Their plan: place science instruments all over the globe to fill in gaps of observations of the near-Earth environment and of Earth's atmosphere and also to encourage heliophysics research and education in developing nations.

› View larger
The International Space Weather Initiative has 700 instruments located in 100 United Nation countries around the world. Credit: ISWI In conjunction with the United Nations, the group began something called the International Space Weather Initiative (ISWI) and they began to encourage scientists and engineers all over the world to help out. Now, five years later, close to 1,000 instruments have been installed in more than 100 UN member states, numerous science papers have been written on the data, new graduate school programs have been established -- and the project continues to grow. Recently in Feb. 2012, for example, says Hans Haubold from the United Nations Office for Outer Space Affairs, an International Center for Space Weather Science and Education was inaugurated at Kyushu University, Fukuoka, Japan, with support from the United Nations.

"Individually, each instrument is not groundbreaking," says Joe Davila, a space scientist at Goddard. "But by placing relatively inexpensive instruments in the right spots, you can get constant viewing of both the sun and of the ionosphere, the boundary between space and the regular atmosphere. We always have a view of the sun from somewhere on the globe."

Such global data gathering relies heavily on participation from scientists in other countries. That translates to cost sharing across borders for these complimentary observations. Davila says that one of ISWI's goals has been to encourage growth in the number of space scientists around the world. In Ethiopia, for example, Bahir-Dar University taught no space science. Now, the school has a department that already has seven master's students.

Encouraging this kind of growth and the international relationships they create is a key part of the UN's interest in the program. But five years in, the scientific rewards are also proving to be important, says Keith Groves, a scientist at Boston College in Boston, Mass. Groves began his association with the program when he was working on a global project for the U.S. Air Force Research Laboratory called SCINDA that sought to better understand how radio communications degrade as they travel through active regions in the ionosphere.

"When we started, we had contacts to install radio monitoring instruments in India, South America, some Pacific islands – but we had a big gap over Africa," says Groves. "And Africa was where some of the maximum ionospheric activity occurred. Now, through this program, we have 14 sites up in Africa."

The set up for each instrument in this experiment is minimal – a Global Positioning Systems (GPS) receiver the size of a loaf of bread attached to a computer. In some cases, there is also a large antenna radio receiver. This is enough to track how communications signals, such as those for GPS, are affected by ionospheric disturbances.

While satellites had measured some of these effects from above and tracked seasonal changes, they had not successfully mapped daily changes in the ionosphere over Africa. These simple set ups have now provided some of the first observations of the daily cycles in this radio degradation, also called "scintillation." The results are quite clear: the effects there are markedly different from the same degradation over South America or over the Pacific. Scientists are working now to better characterize the differences.

Another ISWI project has put 30 very low frequency radio receivers around the globe to observe a different aspect of the ionosphere – how its lowest region changes in response to outside input such as solar flares on the sun, or even the tremendous energy release from lightning. The lower ionosphere is difficult to study as it is too high for hot air balloon measurements, yet too low for satellite measurements. Morris Cohen, a space scientist at Stanford University in Palo Alto, Calif., oversees the project, known as the AWESOME project, and he explains that understanding how the ionosphere reacts to this kind of energy input is equally important to understanding how radio signals travel. Each of the receivers can send and receive low frequency signals from a set of communications beacons whose signals act like laser beams that travel along the ionosphere.

"Together, there is a grid of these receivers and a mesh of laser beams," says Cohen. "They all provide a slice of information about what's going on in the ionosphere at any given time."

A map of the ISWI instruments and projects around the world, as of January 2012. Credit: ISWI

This giant grid has provided several interesting science results. For instance, scientists in Algeria and Libya found that ionospheric disturbances affect radio transmission differently depending on where they occur in the radio wave's path. This is the kind of information that can only be determined by observing numerous communication signals traveling different paths through the same disturbance. Researchers in Malaysia also discovered that ionospheric disturbances induced by lightning over the water lasts much longer than those that occur over dry land. A third result from scientists in India relied on the good fortune to have a number of receivers through India on a path that jibed with a solar eclipse. The scientists were able to track the ionospheric response to the eclipse, and the subtle differences between being directly under the eclipse's path, or slightly off to the side.

In just the first few years, the ISWI global network has begun to show what the power of many people and many instruments working together can do. In addition, it has shown how differently the ionosphere behaves in different parts of the globe.

The global network requires, of course, massive support on the ground from local operators, or even such things taken for granted in the U.S. like robust Internet connections. Getting this infrastructure into place remains part of the current work, but in many locations, the current operators are fully equipped to train the future scientists and the science observations are beginning to roll in.

"It's a big cooperative collaboration that takes very little money," says Goddard's Davila. "These installations are operated with non-U.S. funds, and the world gets all the benefits of the data from it. We're leveraging this into a large chunk of science that we hope will get more and more useful for forecasting space weather."

The United Nations Committee on the Peaceful Uses of Outer Space made space weather an agenda item of its annual deliberations and will address societal impacts of space weather which will encourage all UN member states to provide needed support to ISWI in the future.