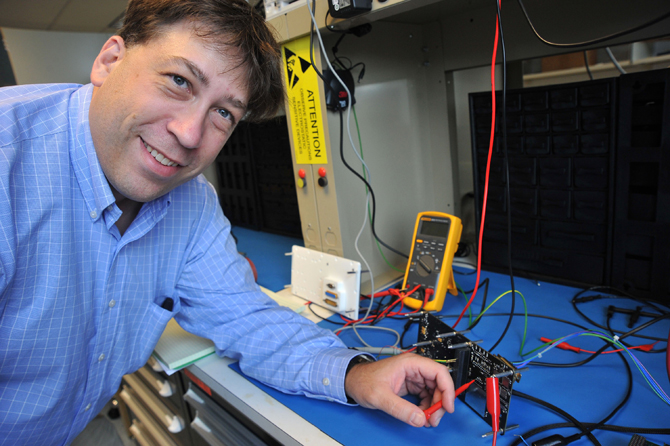 When opportunity knocked, NASA heliophysicist Doug Rowland answered. He and his team recently secured another flight opportunity for a pint-sized instrument studying lightning in Earth's upper atmosphere and now are bracing for a veritable "fire hose" of data about a little-understood phenomenon first discovered by scientists nearly two decades ago.

The instrument, Firestation, is one of four experiments manifested to fly on an experiment pallet the U.S. Department of Defense plans to deploy on the International Space Station in 2013. It's a near duplicate of Firefly, which Rowland and his team at the NASA's Goddard Space Flight Center in Greenbelt, Md., began developing more than three years ago to fly on an emerging class of tiny satellites called Cubesats sponsored by the National Science Foundation. That mission also may launch in 2013.

Having secured a berth on the pallet, Rowland and his university partners must complete Firestation by the spring of 2012 for integration onto the pallet.

That shouldn't be an issue, Rowland said. Firestation is a knock-off of Firefly and, in fact, will be cobbled together from Firefly's spare parts. "We're basically ready," Rowland said. "We benefited from the fact that we had completed Firefly and had spare parts on hand. The only thing we need to do is develop a new housing appropriate for the pallet."

Although the instruments are closely related, they are different in key areas. Firestation covers a wider measurement range. It will take advantage of a camera, also onboard the pallet, to snap photos of lightning flashes so that researchers can precisely locate where they are occurring. Furthermore, Firestation will enjoy a data rate that is about 3,000 times larger than Firefly's, which means the team will be able to sample every lightning stroke, instead of Firefly's carefully selected sample.

But perhaps the biggest difference is in mission duration. Firefly is expected to remain in low-Earth orbit for roughly a month, compared with Firestation's one-year sojourn aboard the space station. As a result, Rowland expects Firefly to gather only a tiny fraction of the science data that its sibling will collect. "This represents orders of magnitude better coverage," he said.

Their mission, however, remains the same. With their suite of sensitive photometers to measure lightning flashes, radio antennas to measure the strength of the lighting, and a combined gamma-ray electron detector, both instruments will gather data to find out whether lightning triggers Terrestrial Gamma-ray Flashes (TGFs). This little understood phenomenon was first discovered using the Burst and Transient Source Experiment (BATSE) on NASA’s Compton Gamma-ray Observatory and later observed by NASA’s Reuven Ramaty High Energy Solar Spectroscopic Imager (RHESSI) satellite, NASA's Fermi satellite and the Italian satellite AGILE.

Although no one knows why, it appears these flashes of gamma rays that were once thought to occur only far out in space near black holes or other high-energy cosmic phenomena are somehow linked to lightning.

"The fact that they exist at all is amazing," said Rowland, who expects his instruments to observe up to 50 lightning strokes per day, at least one TGF every few hours, and a large TGF every couple days. "The electron and gamma-ray energies seen in TGFs are usually the domain of nuclear explosions, solar flares, and supernovas, not our relatively peaceful atmosphere."

In particular, Rowland and his colleagues, including the Universities Space Research Association in Columbia, Md., and Siena College, located near Albany, N.Y., hope to find out if lightning triggers TGFs or if they trigger lightning. Could they be responsible for some of the high-energy particles in the Van Allen radiation belts, which damage satellites?

"We'll be getting a fire hose of data, which we think will help answer those questions — 20 million times as much data as a matter of fact, given the higher data rate and longer mission duration. It's going to be a little crazy."
Lori Keesey
NASA's Goddard Space Flight Center