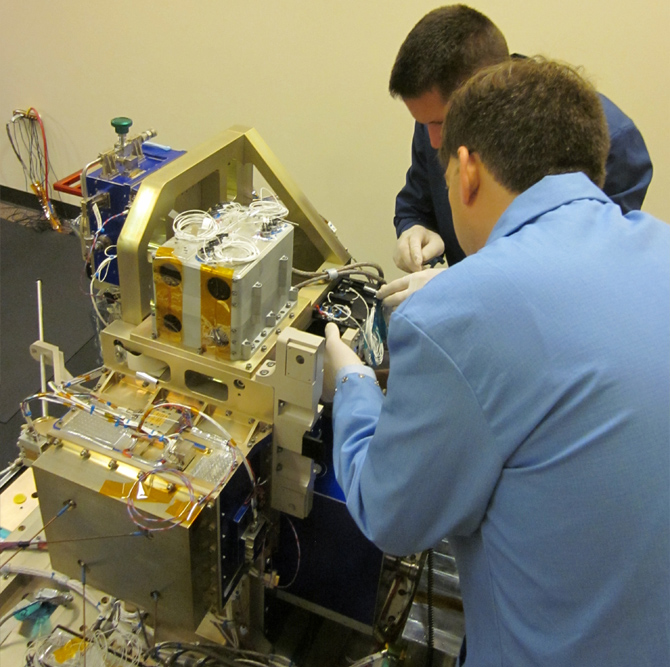 An experiment to study the effects of lightning flashes on Earth's atmosphere has taken its first steps on its journey to space. The Firestation experiment has undergone numerous tests to make sure it’s ready for flight. It left NASA’s Goddard Space Flight Center in Greenbelt, Md. in July 2012 for Johnson Space Center in Houston, Texas for vibration tests. From there it moved to Langley Research Center in Va. to make sure it could withstand the rigors of temperature changes and the vacuum it will experience in space. Soon it will ship to Kennedy Space Center in Fl. for a last round of communication systems testing, before being shipped to Japan for a launch currently scheduled for July 2013.

From its perch high in the atmosphere, Firestation will watch for lightning on Earth. Fifty strokes of lightning occur on Earth every second. Awe-inspiring and beautiful, lightning is also integrated into a vast atmospheric system in ways that are little understood. For one thing, they may trigger another phenomena known as terrestrial gamma-ray flashes or TGFs. Giant bursts of gamma rays have long been witnessed far out in the cosmos, but only in 1994 were they spotted closer to home, by the Burst and Transient Source Experiment (BATSE) from space. In 1996, scientists began to correlate these mysterious bursts with lightning but the mechanism of how one triggers the other is unknown. Indeed, the process that creates lightning is thought to be ten times too weak to generate gamma rays, so one of Firestation's goals will be to distinguish between various theories on how TGF's form.

Current estimates suggest there may be some 500 TGFs every day, and Firestation will spend a year observing them. Three instruments will help the endeavor: a radio receiver, which tracks the tell tale, bacon-frying sound of lightning; an optical photometer to observe the lightning, and a gamma-ray/electron detector. Firestation will also make use of a camera to snap pictures of lightning in progress and help pinpoint its location.