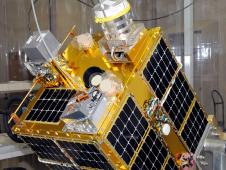 › View larger image
Pre-launch, NASA engineers inspect the Fast, Affordable, Science and Technology Satellite, or FASTSAT, after successfully completing a comprehensive pre-shipment review. Credit: NASA/MSFC/Doug Stoffer PISA: The Plasma Impedance Spectrum Analyzer (PISA) has now completed more than 120 days over the course of six months since it was first turned on. That corresponds to more than 1,600 hours of observations and more than 2 gigabytes of raw data taken over a wide range of locations and environments.

PISA has been running more or less continuously since March 3 when its magnetometer was called upon to support the attitude determination and control system (ADCS) on FASTSAT. The main FASTSAT magnetometer suffered an anomaly on Feb 16 and without it the spacecraft was unable to hold a stable attitude. PISA, however, carries a magnetometer onboard to help gather information about its magnetic environment. The FASTSAT team and Marshall Space Flight Center put in a few long hours re-jigging the spacecraft flight software and they managed to make PISA's magnetometer compatible with the spacecraft's software. All indications are that the PISA magnetometer is performing well -- similar to levels before the February 16 anomaly.

Since PISA switched to constant operation it has greatly exceeded its "success criterion" of 300 hours of data collection. It is now studying the effects of long-term variations in the electron density and temperature in the ionosphere as they correlate to both seasons and the solar cycle. Such variations are important because they can scatter radio waves transmitted by GPS and communication satellites.

MINI-ME: The Miniature Imager for Neutral Ionospheric Atoms and Magnetospheric Electrons (MINI-ME) is functioning well after six months in space. The instrument continues to collect data on neutral atoms and electrons from Earth's magnetosphere in as many different conditions as possible.

The data being collected from MINI-ME is also helping NASA engineers with designing two similar instruments for the VISIONS suborbital mission, currently planned for January 2012.

TTI: The Thermospheric Temperature Imager (TTI) has collected more than 50 days of data. Sensitive to high heat, the instrument is turned off during the two weeks each month when FASTSAT is in continual daylight. Over several cycles, the team has learned to accurately predict thermal responses, thus enabling TTI to confidently run its instruments overnight. This has lead to substantially more data to process and analyze during days of operation.

Analysis of TTI's data requires knowing where the instrument is pointed to within one degree, as well as a field of view of Earth or the atmosphere at its horizon. By tracking stars and information about the spacecraft's attitude, control, and stability, TTI is now able to flag intervals during which it is pointed correctly. This has allowed the team to collect data on the intensity of the ultraviolet airglow -- a weak background radiation emitted in Earth's thermosphere. 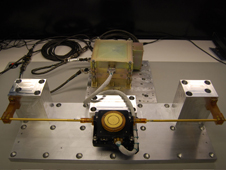 › View larger image
The PISA instrument. Credit: NASA/Doug Rowland GODDARD, MD: The Thermospheric Temperature Imager (TTI) has been operating continuously since March 22. Engineers turned it off for three weeks to protect it from intense heat during the portion of FASTSAT's orbit when it is in continual daylight. TTI's mission is to measure the temperature profile in the top most region of the atmosphere, and that requires that it subtract background radiation from the Earth, sun, or moon. In turn, this requires knowing exactly which direction the instrument is facing to within one degree. The team is in the process of performing these necessary calibrations by comparing TTI's data to outside information on the moon's albedo and solar spectra from the SOLSTICE instrument on the SORCE spacecraft.

The Plasma Impedance Spectrum Analyzer (PISA) has been operating continuously since March 3 and met its full success criterion of 300 hours on April 5. PISA has two detectors. The first, the electrometer, can measure how many electrons per cubic centimeter are in the ionosphere to within 20-30% accuracy. The other is a dipole antenna that can measure the electron numbers to within 1% accuracy – which is about 30 times better than has even been obtained before. With 300 hours worth of data, the electrometer is showing numbers consistent with previous measurements. The team will analyze the antenna's data next.

The Miniature Imager for Neutral Ionospheric Atoms and Magnetospheric Electrons(MINI-ME) continues to collect information about electrons and energetic neutral atoms. Among other things, the team has been identifying periods of particle flow out of the atmosphere and comparing these events with the surrounding geomagnetic activity as well as their geomagnetic latitude. Correlating such particles to geomagnetic activity will give scientists another tool in their quest to better predict space weather events. The MINI-ME and PISA teams are also working together to correlate and compare their data. 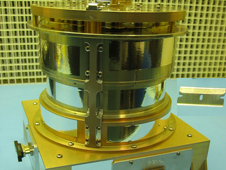 › View larger
The Mini-Me Instrument next to a razor blade, for a sense of size.Credit: NASA GODDARD, MD: To date, the MINI-ME instrument has acquired more than 29 days of observations at optimal science level (i.e., running with the power inputs and other characteristics to which it was initially calibrated in the lab). The instrument has flown during periods of magnetic activity and observed neutral atoms over a wide range of geomagnetic levels. MINI-ME will provide measurements of neutral atoms formed in the plasma population of the Earth’s outer atmosphere to improve global space weather predictions.

TTI continues to operate as planned, detecting far ultraviolet (FUV) airglow and FUV auroral signatures. Engineers are making progress toward optimizing the sensor settings, with half of the necessary functional objectives complete. TTI is on track for achieving full science mode sometime in late April. The TTI instrument will provide the first global-scale measurements of thermospheric temperature profiles in the 56-162 mile region.

The PISA instrument also continues to operate well, accumulating data during its 100 orbits around the Earth. PISA is testing new measurement techniques for the thermal electron populations in the ionosphere, calculating their density structure, which can interfere with or scatter radio signals used for communication and navigation. 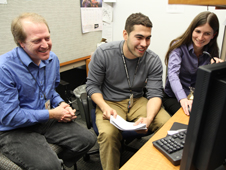 › View larger
Pictured from left are Goddard engineers Eric Mentzell and Marcello Rodriguez with Goddard astrophysicist and TTI principal investigator Sarah Jones.Credit: NASA/Rebecca Roth GODDARD, MD: NASA engineers successfully opened the aperture door on the Thermospheric Temperature Imager (TTI) aboard FASTSAT on Monday, Feb. 7. TTI’s detector is successfully receiving a signal and the team is optimizing the sensor settings. Such tuning relies on accurate knowledge of where TTI is pointing -- and therefore how FASTSAT is oriented in space -- so the TTI and FASTSAT teams are also coordinating on optimizing attitude control of the satellite. 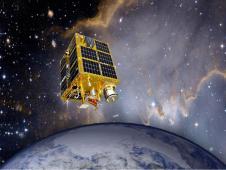 › View larger
Artist concept of the FASTSAT spacecraft. Credit: NASA GODDARD, MD: Over December and January, tests have continued on two of the three joint Goddard and Naval Academy science instruments onboard FASTSAT: the Plasma Impedance Spectrum Analyzer (PISA) and the Miniature Imager for Neutral Ionospheric Atoms and Magnetospheric Electrons (MINI-ME). Both are operating nominally and are beginning to collect data.

The third science instrument, the Thermosphere Temperature Imager (TTI), is scheduled for activation on February 1.

As of January 20, 2011, at 4:39 P.M. EST, MINI-ME achieved full science mode (i.e. it is running with the power inputs and other characteristics to which it was initially calibrated in the lab), and has been collecting science data since that time.

On January 24, 2011, PISA was turned on again for the first time since Dec 22 and everything appears nominal. The spacecraft attitude control is much improved, and the scientists hope to gather several days of data with PISA in the nominal orientation (previous PISA data were taken in a wide range of orientations while FASTSAT itself moved towards its ultimate orientation).

To learn more about all six experiments, visit the FASTSAT website 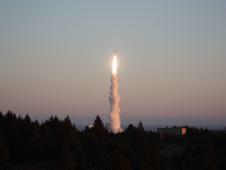 PISA: The Plasma Impedance Spectrum Analyzer, or PISA, represents a new technique for understanding the environment of charged gas, or "plasma" around a spacecraft.

The instrument is showing promising instrument performance, and the team is looking forward to optimizing instrument settings and making observations over a wide range of plasma conditions in order to validate measurements. PISA is currently in its first prime science operation period, which began Dec. 10 and runs through Dec. 23, and is undergoing extensive on orbit measurement validation and analysis.

MINI-ME: The Miniature Imager for Neutral Ionospheric Atoms and Magnetospheric Electrons or MINI-ME, represents a new technique that, like PISA, senses charged gas, or plasma, environments, but does so remotely by imaging the plasmas, like a camera.

The team has slowly raised the high voltage on MINI-ME and is collecting their first science data during the period Dec. 13 - 23.

TTI: The Thermospheric Temperature Imager (TTI) will remotely measure the temperature of the upper most region of Earth's atmosphere or "thermosphere".

Full functionality of the instrument will be demonstrated after the aperture door is opened and the team acquires science data. TTI's first science operations are scheduled to begin February 1, 2011.

To learn more about these three experiments, visit: http://www.nasa.gov/topics/technology/features/fastsat-alaska.html