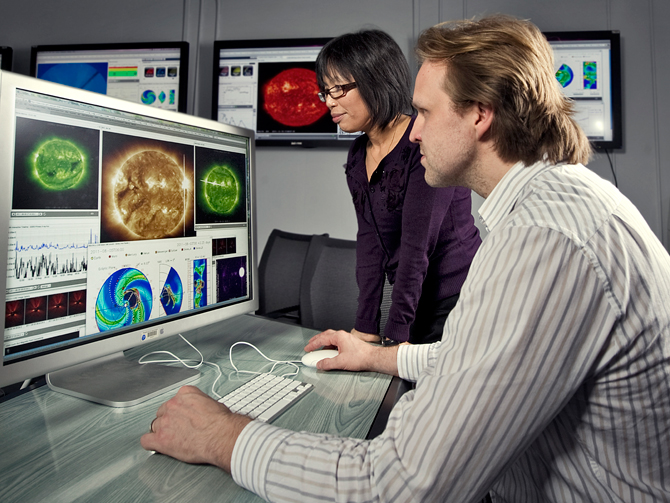 › View larger
Chief space weather forecasters Yihua Zheng and Antti Pulkkinen are helping to implement a computer technique — ensemble forecasting — that will improve NASA’s ability to predict the path and impact of severe solar storms, which can disrupt power grids on Earth, knock out satellites, and threaten the health and safety of astronauts. Credit: NASA/Chris Gunn

Improved Forecasting to Coincide with Peak in Solar Activity

After years of relative somnolence, the sun is beginning to stir. By the time it's fully awake in about 20 months, the team at NASA’s Goddard Space Flight Center in Greenbelt, Md., charged with researching and tracking solar activity, will have at their disposal a greatly enhanced forecasting capability.

Instead of analyzing one set of solar-storm conditions, as is the case now, Goddard forecasters will be able to simultaneously produce as many as 100 computerized forecasts by calculating multiple possible conditions or, in the parlance of Heliophysicists, parameters. Just as important, they will be able to do this quickly and use the information to provide alerts of space weather storms that could potentially be harmful to astronauts and NASA spacecraft.

"Space weather alerts are available now, but we want to make them better," said Michael Hesse, chief of Goddard's Space Weather Laboratory and the recently named director of the Center's Heliophysics Science Division. "Ensemble forecasting will provide a distribution of arrival times, which will improve the reliability of forecasts. This is important. Society is relying more so than ever on space. Communications, navigation, electrical-power generation, all are all susceptible to space weather." Once it's implemented, "there will be nothing like this in the world. No one has done ensemble forecasting for space weather."

The state-of-the-art capability, which Hesse's group is implementing now and expects to complete within three years, couldn't come too soon, either.

Since the sun reached its solar minimum in 2008 — the period when the number of sunspots is lowest — it has begun to awaken from its slumber. On Aug. 4, the sun unleashed a near X-class solar flare that erupted near an Earth-facing sunspot. Although flares don't always produce coronal mass ejections (CMEs) — gigantic bubbles of charged particles that can carry up to ten billion tons of matter and accelerate to several million miles per hour as they erupt from the sun's atmosphere and stream through interplanetary space — this one did.

The CME overtook two previous CMEs — all occurring within 48 hours — and combined into a triple threat. Luckily for Earthlings, the CMEs produced only a moderate geomagnetic storm when solar particles streamed down the field lines toward Earth's poles and collided with atoms of nitrogen and oxygen in the atmosphere. Even so, "it was the strongest storm in many years," said Antti Pulkkinen, one of the laboratory's chief forecasters.

However, the repercussions could be far worse in the future. As part of its 11-year cycle, the sun is entering solar maximum, the period of greatest activity. It is expected to peak in 2013. During this time, more powerful CMEs, often associated with M- and X-class flare events, become more numerous and can affect any planet or spacecraft in its path. In the past, solar storms have disrupted power grids on Earth and damaged instrumentation on satellites. They can also be harmful to astronauts if they are not warned to take protective cover.

Given the expected uptick in activity, Hesse, Pulkkinen, and Yihua Zheng, another chief forecaster, were anxious to enhance their forecasting acumen. They partnered with the Space Radiation Analysis Group at NASA's Johnson Space Center in Houston, which is responsible for ensuring that astronauts' exposure to deadly radiation remains below established safety levels, and won NASA funding to develop the Integrated Advanced Alert/Warning Systems for Solar Proton Events.

"Ensemble forecasting holds the key" to an enhanced alert system," Hesse said. "We agreed that this was the way to go."

Furthermore, imperfections exist in the data. These imperfections grow over time, leading to forecasts that don't agree with the evolution of actual conditions. For NASA, the Air Force, and other organizations, which use Goddard's forecasts to decide whether steps are needed to protect space assets and astronauts, uncertainty is as unwelcome as the storm itself.

Ensemble forecasting, however, overcomes the weaknesses by allowing forecasters to tweak the conditions. "Generating different parameters is easy — just varying a little bit of all parameters involved in characterizing a CME, such as its speed, propagation direction, and angular extent," Zheng explained. In essence, the multiple forecasts provide information on the different ways the CME can evolve over the next few hours. "We'll be able to characterize the uncertainties in our forecasts, which is almost as important as the forecast itself," Pulkkinen added. 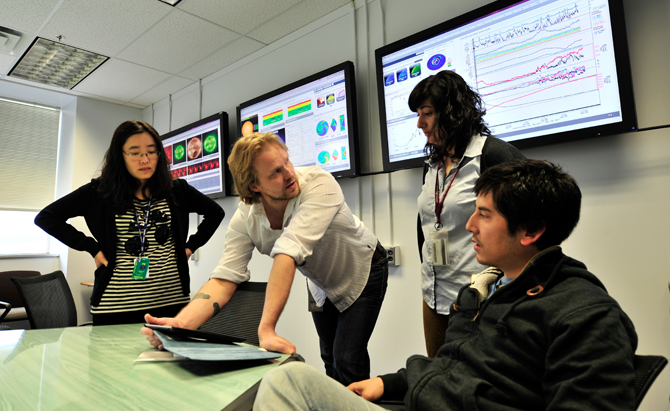 › View larger
Space Weather Services at NASA's Goddard Space Flight Center in Greenbelt, Md., is made up of scientists who track solar disruptions and predict their impact on Earth. Shown here are a few of those experts (from left to right): Hysook Lee, Antti Pulkkinen, M. Leila Mays, and David Berrios. Credit: NASA/Chris Gunn

The team has already installed new computer systems to run the varying calculations and hopes to develop the ability to generate more specialized forecasts.

"We recognize there is a huge gap in our current capability," Pulkkinen continued. "We certainly don't want to miss the solar maximum with this capability. We're really pushing the envelope to have it done. When we do, we'll be the first in the world to have it."

When this forecasting technique is verified and validated by NASA's Space Weather Laboratory, the capability will be made available to NOAA's Space Weather Prediction Center, which is responsible for issuing national space weather alerts. NASA's goal to understand and track space weather activity will enable a greatly enhanced forecasting capability for U.S. interests.

For more information about technology development at the Goddard Space Flight Center, visit: