People from around the world are converging on the coast of northeast Australia. The attraction isn't the Great Barrier Reef, just offshore, or the surrounding rain forests full of wildlife and exotic plants. They're going to see a total eclipse of the sun.

On the morning of Nov. 14, 2012 (Australia time), about an hour after sunrise, the Moon will pass directly in front of the sun. Residents and visitors of the city of Cairns, also known as the Gateway to the Great Barrier Reef, will enjoy an early morning eclipse lasting 2 minutes with the sun only 14 degrees above the eastern horizon.

NASA eclipse expert Fred Espenak has a rating scheme for natural wonders. "On a scale of 1 to 10," he says, "total eclipses are a million." Even the reef itself will be momentarily forgotten by onlookers as the Moon's cool shadow sweeps across the beach and the ghostly tendrils of the solar corona surround the black lunar disk.

In plain language, they'd like to know why the sun's outer atmosphere or "corona" is so hot. The surface temperature of the sun is only 6000 degrees C. Yet the corona above it is much warmer, a million degrees Celsius or even more.

To understand the physics involved, astronomers have developed instruments called coronagraphs, which block the glare of the sun to reveal the faint corona. Three spacecraft, SOHO and the twin STEREO probes, currently monitor the solar corona using these devices. But no manmade instrument can match Earth’s natural satellite. The Moon is nature's greatest coronagraph.

During an eclipse, "the moon reveals the innermost corona, which man-made coronagraphs have trouble seeing,” explains Shadia Habbal of the Institute for Astronomy in Hawaii. “That is where all the magnetic field and physical processes responsible for heating the corona are evolving most rapidly." 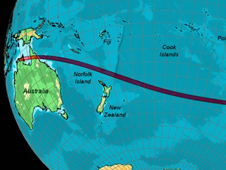 On Nov. 13/14, 2012, the path of totality crosses the northeast coast of Australia.
› View times and a map of the entire eclipse path On Nov. 12, 2012, Habbal will be in Palm Cove, Australia, to deliver a keynote speech at a solar physics conference sponsored in part by NASA's Living with a Star Program. The title of her talk is "The unique scientific advantages of total solar eclipse observations." Two days later, Habbal and her colleagues will be inside the path of totality, monitoring the eclipse with a variety of telescopes and spectrometers at 6 different wavelengths from 2 different sites.

Astronomy professor Jay Pasachoff, chair of the International Astronomical Union's Working Group on Eclipses will be there, too. He has observed an astounding 55 solar eclipses. "The Australia eclipse will be my 56th," he notes.

Over the years, Pasachoff and colleagues have developed techniques to photograph the corona with a clarity and resolution that coronagraphs on current spacecraft cannot match. Using these techniques, "we are learning how the wonderfully-detailed structures we see in the corona are shaped by the sun's magnetic field," he explains. The shapes vary in a regular way during the sun's 11-year sunspot cycle. “We can use this information to improve predictions of the next solar cycle."

That's a lot of science in two minutes of shadowy darkness.

After totality is over, the moon's shadow will sweep out across the South Pacific Ocean, tracing a line thousands of miles long across uninhabited waters, reaching almost, but not quite, the coast of South America. Back on the beach, scientists will be taking a first look at their data while tourists starting thinking about breakfast--and snorkeling in the reef. For all concerned, it's a great way to begin the day.