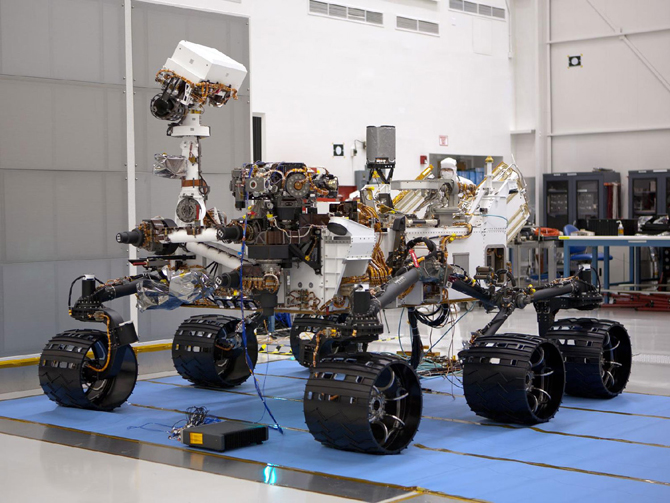 › View larger
Curiosity doesn't look much like a human being, but the rover turns out to be an excellent stunt double for real astronauts. Credit: NASA/JPL-Caltech

With a pair of bug-eyes swiveling on a stalk nearly 8 feet off the ground, the 6-wheeled, 1800-lb Mars rover Curiosity doesn't look much like a human being. Yet, right now, the mini-Cooper-sized rover is playing the role of stunt double for NASA astronauts.

"Curiosity is riding to Mars in the belly of a spacecraft, where an astronaut would be," explains Don Hassler of the Southwest Research Institute in Boulder, Colorado. "This means the rover experiences deep-space radiation storms in the same way that a real astronaut would."

Indeed, on Jan. 27th, 2012, Curiosity's spacecraft was hit by the most intense solar radiation storm since 2005. The event began when sunspot AR1402 produced an X2-class solar flare. (On the "Richter Scale of Solar Flares," X-flares are the most powerful kind.) The explosion accelerated a fusillade of protons and electrons to nearly light speed; these subatomic bullets were guided by the sun's magnetic field almost directly toward Curiosity.

When the particles hit the outer walls of the spacecraft, they shattered other atoms and molecules in their path, producing a secondary spray of radiation that Curiosity both absorbed and measured.

"Curiosity was in no danger," says Hassler. "In fact, we intended all along for the rover to experience these storms en route to Mars." 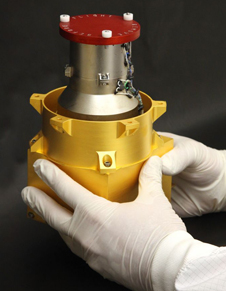 › View larger
Photo of the Radiation Assessment Detector (RAD) that is on-board the Curiosity rover. Credit: NASA/JPL-Caltech Unlike previous Mars rovers, Curiosity is equipped with a Radiation Assessment Detector. The instrument, nicknamed "RAD," counts cosmic rays, neutrons, protons and other particles over a wide range of biologically-interesting energies. RAD's prime mission is to investigate the radiation environment on the surface of Mars, but researchers have turned it on early so that it can also probe the radiation environment on the way to Mars as well.

Curiosity's location inside the spacecraft is key to the experiment.

"We have a pretty good idea what the radiation environment is like outside," says Hassler, who is the principal investigator for RAD. "Inside the spacecraft, however, is still a mystery."

Even supercomputers have trouble calculating exactly what happens when high-energy cosmic rays and solar energetic particles hit the walls of a spacecraft. One particle hits another; fragments fly; the fragments themselves crash into other molecules.

"It's very complicated. Curiosity is giving us a chance to actually measure what happens."

Even when the sun is quiet, Curiosity is bombarded by a slow drizzle of cosmic rays—high-energy particles accelerated by distant black holes and supernova explosions. In the aftermath of the Jan. 27th X-flare, RAD detected a surge of particles several times more numerous than the usual cosmic ray counts. Hassler's team is still analyzing the data to understand what it is telling them about the response of the spacecraft to the storm.


More X-flares will help by adding to the data set. Hassler expects the sun to cooperate, because the solar cycle is trending upward toward a maximum expected in early 2013.

As of February 2012, "we still have 6 months to go before we reach Mars. That's plenty of time for more solar storms."