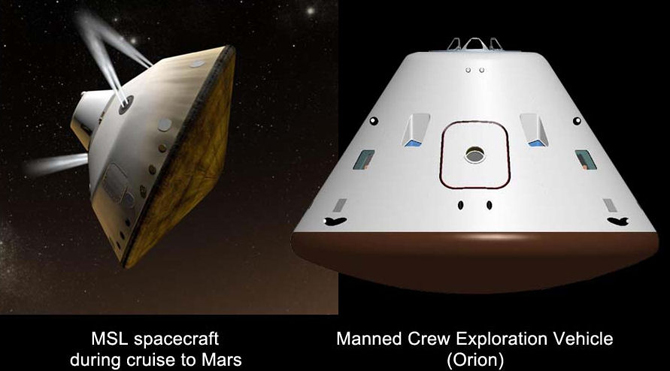 › View larger
Curiosity traveled to Mars in the belly of a space capsule akin to human-crewed capsules. Credit: NASA

When Curiosity enters the Martian atmosphere on August 6th, setting in motion "the seven minutes of terror" that people around the world have anticipated since launch a year ago, the intrepid rover will actually be performing the mission's second daredevil stunt.

The first was completed in July.

For the past nine months, Curiosity has been acting as a stunt double for astronauts, exposing itself to the same cosmic radiation humans would experience following the same route to Mars1.

"Curiosity has been hit by five major flares and solar particle events in the Earth-Mars expanse," says Don Hassler of the Southwest Research Institute in Boulder, Colorado. "The rover is safe, and it has been beaming back invaluable data."

Unlike previous Mars rovers, Curiosity is equipped with an instrument that measures space radiation. The Radiation Assessment Detector, nicknamed "RAD," counts cosmic rays, neutrons, protons and other particles over a wide range of biologically-interesting energies. RADs prime mission is to investigate the radiation environment on the surface of Mars, but NASA turned it on during the cruise phase so that it could sense radiation en route to Mars as well.

Curiosity’s location inside the spacecraft is key to the experiment.

"Curiosity is riding to Mars in the belly of the spacecraft, similar to where an astronaut would be," explains Hassler, RAD's principal investigator. "This means the rover absorbs deep-space radiation storms the same way a real astronaut would."

Even supercomputers have trouble calculating exactly what happens when high-energy cosmic rays and solar energetic particles hit the walls of a spacecraft. One particle hits another; fragments fly; the fragments themselves crash into other molecules.

"It’s very complicated. Curiosity has given us a chance to measure what happens in a real-life situation." 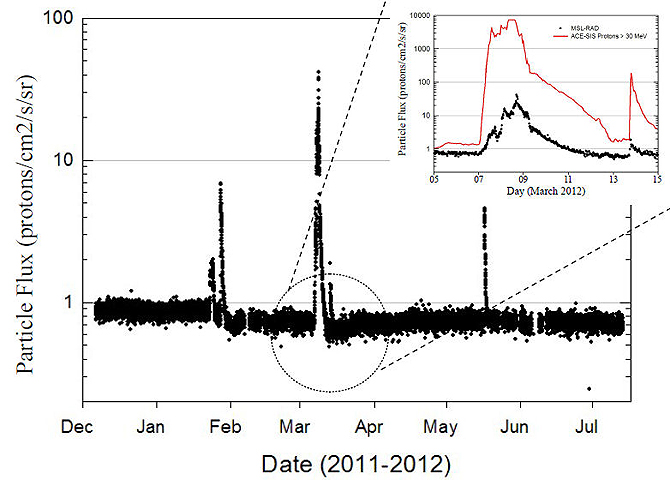 Hassler says the walls of the Mars Science Lab spacecraft have performed as expected: Only the strongest radiation storms have made it inside. Moreover, charged particles penetrating the hull have been slowed down and fragmented by their interaction with the spacecraft's metal skin.

"It's not only the walls that matter, however," he points out. "The spacecraft's hydrazine tanks and other components contribute some protection, too."

Data from Curiosity will help sort out how different subsystems block and respond to cosmic rays and solar radiation. This is information designers of human-crewed spacecraft urgently need to know. "We plan to publish results in a refereed journal later this year," says Hassler.

RAD was turned off July 13th in preparation for landing. Mission controllers will turn it on again after Curiosity sets down in Gale crater. Then researchers will learn what radiation awaits astronauts on the surface of Mars itself.

"No one has ever before measured this kind of radiation from the surface of another planet." Says Hassler, "we’re just getting started."