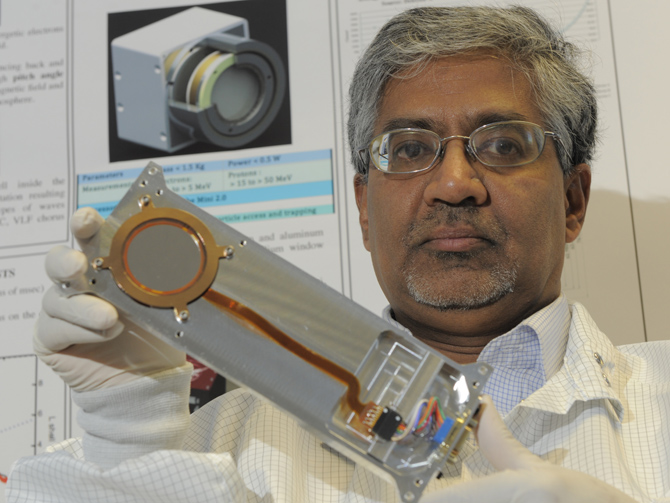 › View larger
Scientist Shri Kanekal holds one of the solid-state detectors that will be used in the Compact Relativistic Electron and Proton Telescope (CREPT). The picture on the wall to the left is a design diagram of the instrument. Credit: NASA/ P. Izzo
A smaller version of an instrument now flying on NASA’s Van Allen Probes has won a coveted spot aboard an upcoming NASA-sponsored Cubesat mission — the perfect platform for this pint-size, solid-state telescope.

The small solid-state telescope, which Kanekal and his team are developing under NASA’s Low-Cost Access to Space (LCAS) program, will measure energetic electrons and protons in Earth’s Van Allen Belts, which are large doughnuts of radiation that surround Earth. CREPT measurements will give scientists a better understanding of the physics of how the radiation belts lose electrons by a process known as electron microbursts.

Discovered in 1958 with instruments aboard NASA’s Explorer 1 spacecraft, the Van Allen radiation belts have long intrigued scientists. The inner belt, stretching from about 1,000 to 8,000 miles above Earth’s surface, is fairly stable. However, the outer ring, spanning 12,000 to 25,000 miles, can swell up to 100 times its usual size during solar storms, engulfing communications and research satellites, bathing them in harmful radiation. 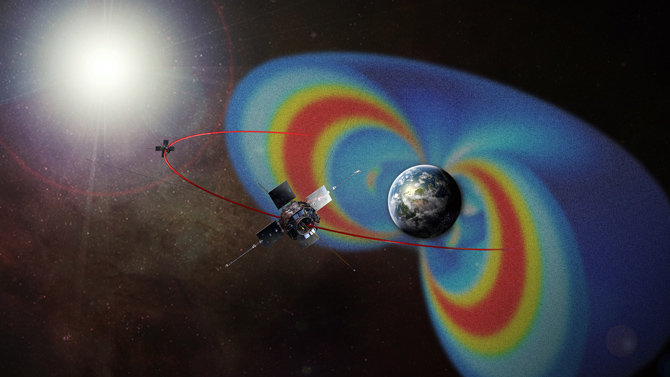 › View larger
The tiny CREPT instrument will augment the science of NASA’s Van Allen Probes, formerly known as the Radiation Belt Storm Probes. This artist’s rendering of the Van Allen Probes mission shows the path of its two spacecraft through the radiation belts that surround Earth, which are made visible in false color. Credit: NASA
Further complicating matters, the outer belt does not always respond in the same way to solar storms. Sometimes it swells; sometimes it shrinks — an event caused when electrons in the outer loop either drop into the atmosphere or escape into space.

Microbursts, CREPT’s primary object of interest, are one mechanism by which the outer belt loses electrons.

“We don’t know when a solar storm hits the Earth what the net effect will be,” Kanekal says. “The Van Allen Belts can swell, shrink, or in some cases remain unchanged. To understand what will happen when a solar storm impacts Earth, we need to know not only why the number of particles increases but also how they decrease or get lost. This is why studying microbursts is important. They tell us how particles are lost."

Kanekal, who also is the lead scientist on the Relativistic Electron and Proton Telescope (REPT) now flying on the Van Allen Probes, decided to develop a more compact version of the instrument in 2012 — an effort initially funded by Goddard’s Internal Research and Development (IRAD) program.

“To our delight, NASA selected our proposal,” Kanekal said, adding that the unit Kanekal created under his IRAD to demonstrate the telescope’s flight heritage is expected to fly on a Spanish Cubesat.

Under his $1.5-million LCAS award, Kanekal and his team will spend the next two years building CREPT. In year three, he plans to fly the telescope on a three-unit Cubesat, which more than likely will be launched by an Air Force Falcon 9 rocket. From its polar orbit, CREPT will be able to study electron growth and decay from a low-altitude polar orbit — an observing location that augments the science now being performed by REPT, which is flying in an equatorial orbit at high altitudes.

Although not quite as robust as the larger REPT, the new instrument offers enhanced processing capabilities. It will carry a processor called the SpaceCube-Mini, one of three in a family of IRAD-funded processors developed by Goddard technologist Tom Flatley. This new processor is 25 times faster than the current state-of-the-art processor, the RAD750.

Another CREPT technology is an application-specific integrated circuit developed by Goddard scientist Nick Paschalidis. This analog-to-digital circuit helps analyze data, which then are directly fed into SpaceCube-Mini. Combined, the package provides a factor-of-four improvement in time resolution, meaning that the telescope can take measurements every five milliseconds.

“We made this instrument more compact and we improved how fast we can measure particles,” Kanekal said. “Everything came together. We leveraged our technologies from the IRAD program, which really was crucial.”

For more information about the REPT, visit: