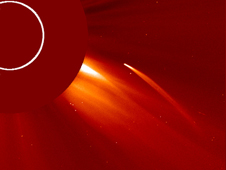 › View larger
A "sun grazing" comet as caught by SOHO's LASCO C2 camera as it dived toward the sun on July 5 and July 6, 2011. SOHO is the overwhelming leader in spotting sungrazers, with over 2000 spotted to date, aided by the fact that the sun's bright light is itself blocked out by a coronograph. Credit: SOHO (ESA & NASA) On the evening of Tuesday, July 5, a comet flew into the sun. Such comets are not unusual, and they're called "sungrazers" since they come so close to the star that it is believed they evaporate and disappear. However, no one has actually seen the end of that journey, since the comets are best seen in cameras from SOHO (SOlar and Heliospheric Observatory) that block out the bright disk of the sun itself.

But this was different. For the first time ever, SDO (Solar Dynamics Observatory) captured a 20-minute movie of the comet streaking directly in front of the sun. It's not immediately obvious, but if you watch the movie closely, you'll see a line of light appear in the right and move across to the left.

At its most basic, the movie has scientists excited since it's a "first," but additional analysis of the data may hold more clues about the fate of the comet. Most likely, given the intense heat and radiation, the comet simply evaporated away completely.