Glowing green and red, shimmering hypnotically across the night sky, the aurora borealis is a wonder to behold. Longtime sky watchers say it is the greatest show on Earth.

It might be the greatest show in Earth orbit, too. High above our planet, astronauts onboard the International Space Station (ISS) have been enjoying an up-close view of auroras outside their windows as the ISS flys through geomagnetic storms.

"We can actually fly into the auroras," says eye-witness Don Pettit, a Flight Engineer for ISS Expedition 30. "It's like being shrunk down and put inside of a neon sign."

Auroras are caused by solar activity. Gusts of solar wind and coronal mass ejections strike Earth's magnetic field, rattling our planet's protective shell of magnetism. This causes charged particles to rain down over the poles, lighting up the atmosphere where they hit. The physics is akin to what happens in the picture tube of a color TV.

Incoming particles are guided by Earth's magnetic field to a pair of doughnut-shaped regions called "auroral ovals." There's one around the North Pole and one around the South. Sometimes, when solar activity is high, the ovals expand, and the space station orbits right through them.

That's exactly what happened in late January 2012, when a sequence of M-class and X-class solar flares sparked a light show that Pettit says he won't soon forget. "The auroras could be seen [as brightly as] city lights on the Earth below -- and even in the day-night terminator of the rising and setting sun. It was simply amazing."

Pettit is a skilled astrophotographer. He and other members of the crew video-recorded the displays, producing footage that officials say is some of the best-ever taken from Earth orbit.

The videos capture the full range of aurora colors -- red, green, and many shades of purple. These hues correspond to different quantum transitions in excited atoms of oxygen and nitrogen. The precise color at any altitude depends on the temperature and density of the local atmosphere. 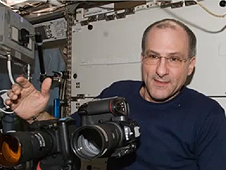 › View larger
Astronaut Don Pettit is a prolific photographer and writer. Credit: NASA "Red auroras reach all the way up to our altitude 400 km above Earth," says Pettit. "Sometimes you feel like you can reach out and touch them."

"Green emissions, on the other hand, tend to stay below the space station," he says. They move like a living 'shag carpet' of lights. "We fly right over them."

Surprisingly, Pettit does not find this unsettling. "It is not disorienting to see auroras underfoot," he says. "Perhaps it is because I have been up here so long."

What he does find disorienting is the meteors.

"Occasionally we see a meteor burning up in the atmosphere below -- and this does look strange. You should be looking up for meteors not down."

As marvelous as these sights are, Petit has seen better. He was the science officer for ISS expedition 6 back in 2003 when the auroras were even stronger than they were now.

"But this expedition is not over yet," he points out hopefully.

Indeed, more auroras are in the offing. Following some recent years of deep quiet, the sun is waking up again. Solar activity is now trending upward with a maximum expected in early 2013.

This means the greatest show on Earth -- and in Earth orbit -- is about to get even better.