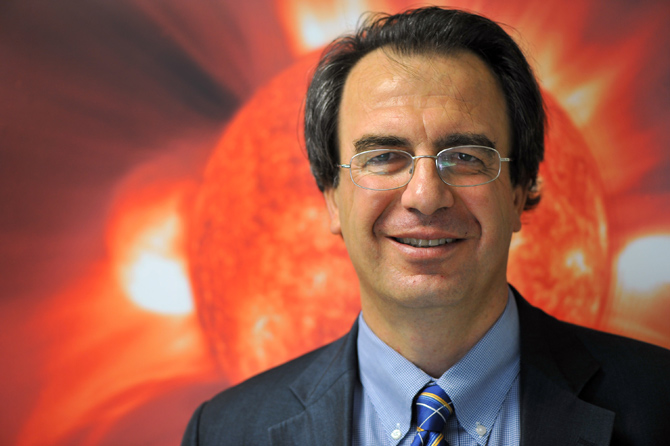 Nikolaos Paschalidis has been reading a lot lately. He has read reports and read proposals, as he tries to get a handle on the multitude of projects, technological innovations, and engineering feats being herded to development by some 300 NASA heliophysics scientists and engineers.

Coordinating the technology advancement for the Heliophysics Science Division at NASA's Goddard Space Flight Center in Greenbelt, Md., Paschalidis needs a thorough understanding of different technologies under development. But the job also requires a broader view. Since he began at Goddard in June of 2011, Paschalidis has sought to gain a holistic understanding of how the various projects fit together to further scientific research of the sun, Earth's magnetic environment, and all the space weather in between. And at this kind of thinking Paschalidis has a great deal of experience.

"I think it's important to understand many aspects of life," he says. "I like to read history, and philosophy and the history of science. Together this helps put our specific science into context. Here at Goddard it's the same thing: one needs to get a picture of the whole in order to understand the details of the parts. I have always thought education should be spherical like this. Perhaps it's my Greek heritage."

Paschalidis was born in the north of Greece in a province called Macedonia. He attended the Democritus University of Thrace in Xanthi, some 100 miles away, where he earned his undergraduate degree in electrical and computer engineering in 1985 and his PhD in 1992. For his PhD, he specialized in space science and technology, and his doctorate research was done at The Johns Hopkins University's Applied Physics Laboratory in Laurel, Md., where first as a post-doc and then a staff member he continued until 2011. At Goddard, his job title is Senior Project Scientist for Technology Advancement, coordinating the science and technology advancement efforts in the Heliophysics Science Division.

"Coordinating these efforts is not just a decision on my end," says Paschalidis. "It's a collective division effort about what we want to achieve in the near future and the far future. How can we best strategize our resources and efforts?"

Such strategies require, first, an understanding of all the various projects underway – an understanding he says that has been helped by one of his first big tasks at Goddard: reading the division's IRAD (Independent Research and Development) proposals for 2012 in his role as liaison to Goddard's Chief Technologist's office, which funds the IRAD program. 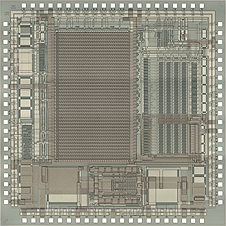 › View larger
A greatly magnified photo of Paschalidis's Time of Flight chip that can measure the passage of time to a trillionth of a second. Its actual size is a half-inch by a half-inch. Credit: Paschalidis Much of his career has focused on the small to explore the big. With his background as an experimental space scientist, he has worked to develop miniaturized, low-power instruments -- a host of measurement tools that are de rigueur on so many missions, from ultra accurate clocks to thermometers. He created miniature computer chips at the heart of instruments that measure just a half-inch by a half-inch. These are called Application Specific Integrated Circuits or ASICs and are used to replace instrument systems that previously weighed about two pounds and required much more energy.

Such ASICs have been built into a host of NASA spacecraft, including Cassini, Messenger, New Horizons, STEREO, IBEX, and JUNO just to name a few. They're also being incorporated into many of the upcoming heliophysics missions to study the geomagnetic environment near Earth, such as the Radiation Belt Storm Probes (RBSP) and the Magnetospheric Multiscale (MMS) mission, as well as missions that will get ever closer to the sun, such as Solar Orbiter and Solar Probe Plus.

Paschalidis has led the development of a family of about ten key ASICs that help measure three scientific basics: time of flight, look angle, and energy. Such information helps scientists map out the composition and energy of radiation between the sun and Earth. The most well known ASIC Paschalidis invented – one of two for which he holds patents – is the time of flight chip. It's a system on a chip that measures time down to a trillionth of a second. Instruments onboard heliophysics experiments need to know time that precisely to help determine the velocity of a particle or to measure its direction of movement. Another ASIC – the energy chip – measures the energy distribution of radiation. A third, engineering focused ASIC called the TRIO chip replaces miles of wiring on spacecraft by digitizing and serializing multiple distributed sensors.

Paschalidis plans to continue work on advanced instruments while at Goddard to further NASA's heliophysics missions. He hopes to build up some basic infrastructure technology for similar ASICs here and move on to miniaturization of other instruments that can help measure radiation and light at various wavelengths to help fulfill a suite of heliophysics needs.

He also plans to engage with the many new mission ideas pioneered at Goddard and contribute to new ones. A main focus of his is on low-cost access to space through commercial telecom satellites – an idea he has pioneered for the last five years. "Commercial satellites are increasingly willing to host scientific instruments," Paschalidis says. He is currently a co-investigator and technical lead of a NASA proposal to host three remote sensing neutral atom imagers in geosynchronous orbit. "More instruments like this can be added to the geo-grid to study space weather, at a fraction of the price."

But for now, in his first few months, Paschalidis is enjoying the chance to absorb all that the Heliophysics Science Division at Goddard does, from large missions to cubesats to rockets, in the attempt to explore the sun and its influence over Earth and the entire solar system. "There's a bigger picture here," he says. "For instance, there's a lot of instrument development work and many mission ideas going on not only on the particle side -- which I have been more involved in -- but on the whole electromagnetic spectrum, photons of all wavelengths, from infrared to visible to ultraviolet, X-rays, gamma rays . . . everything's more diversified here at NASA." And thinking big and small simultaneously will be just what is needed to help create the cutting-edge technology that drives science forward.