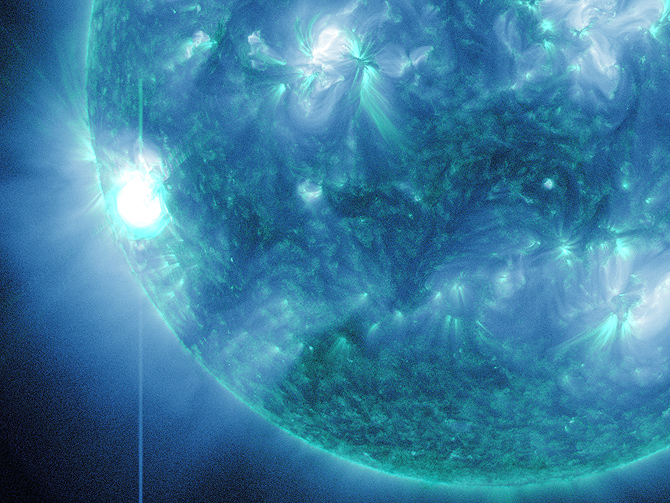 › View larger
This image of a solar flare on Oct 22, 2012, combines the light from two different wavelengths as captured by NASA’s Solar Dynamics Observatory (SDO). The wavelengths are 131 and 335 Angstroms, typically colorized in teal and blue, respectively. The former is a particularly good wavelength for observing solar flares, while the latter helps highlight active regions on the sun where such flares can originate. Credit: NASA/SDO/GSFC

On Oct. 22, 2012, the sun emitted another mid-level flare, which peaked at 2:51 p.m. EDT. The flare emerged from the same region as the M9 flare on Oct. 20, an active region that has been numbered AR 1598. The flare is classified as an M5 flare, which means it was weaker than the earlier one.

The same active region has also emitted several relatively slow coronal mass ejections (CMEs) -- another solar phenomenon that can send solar particles into space and can reach Earth one to three days later. When Earth-directed, CMEs can affect electronic systems in satellites and on Earth, however since the active region is still off to the sun’s left side, these CMEs were not directed toward Earth.


What is a solar flare? What is a CME?