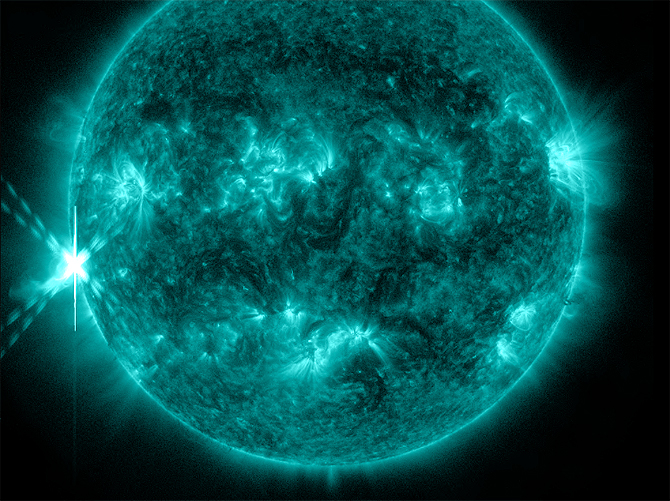 › View larger
NASA's Solar Dynamics Observatory (SDO) captured this image of an M9-class flare on Oct 20, 2012 at 2:14 p.m. EDT. This image shows light at a wavelength of 131 Angstroms, which corresponds to material at 10 million Kelvin, and is a good wavelength for observing flares. This wavelength is typically colorized as teal, as shown here. Credit: NASA/SDO

The sun emitted a significant solar flare, peaking at 2:14 p.m. EDT on Oct. 20, 2012. This flare is classified as an M9 flare. M-class flares are the weakest flares that can still cause some space weather effects near Earth. Since flares are rated on a scale from 1 to 10, an M9 is a particularly strong M class flare, but still ten times weaker than the most powerful flares, which are labeled X-class.

The flare appeared on the left limb of the sun, from a region that is just rotating into Earth's view.

Solar flares are gigantic bursts of radiation. The harmful radiation from a flare cannot pass through Earth's atmosphere to physically affect humans on the ground, however -- when intense enough -- they can disturb the atmosphere in the layer where GPS and communications signals travel. This disrupts the radio signals for as long as the flare is ongoing, anywhere from minutes to hours.

The National Oceanic and Atmospheric Association, which is the United States government's official source for space weather forecasts, categorized the radio blackout associated with this flare as an R2, on a scale from R1 to R5. It has since subsided.

Increased numbers of flares are quite common at the moment, since the sun's normal 11-year activity cycle is ramping up toward solar maximum, which is expected in 2013. Humans have tracked this solar cycle continuously since it was discovered in 1843, and it is normal for there to be many flares a day during the sun's peak activity.


What is a solar flare?