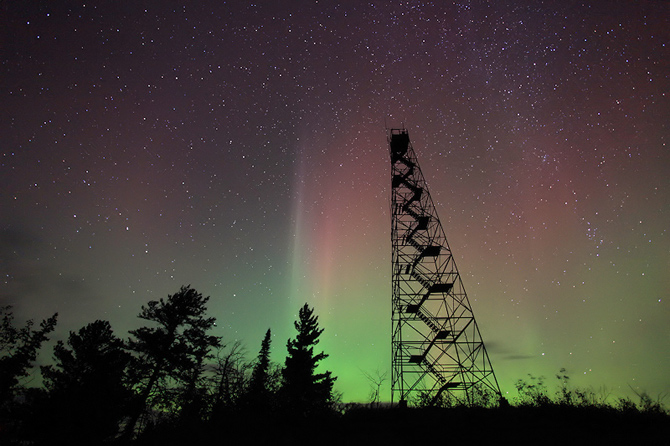 › View larger
"Almost as soon as it was dark we were seeing vertical columns of light extending high into the sky, with the ever-present green color, but also lots of red color!" said Travis Novitsky of Grand Portage, Northeastern Minnesota, of this image he took on Sept. 26. Image Courtesy of Travis Novitsky.

UPDATE 09.27.11 - The severe geomagnetic storm (Kp=7-8) that began yesterday when a CME hit Earth's magnetic field is subsiding. At the peak of the disturbance, auroras were sighted around both poles and in more than five US states including Michigan, New York, South Dakota, Maine, and Minnesota.

› View larger
Every three hours throughout the day, magnetic observatories around the world measure the largest magnetic change that their instruments recorded during that period. The result is averaged together with those of the other observatories to produce an index (Kp index) that tells scientists how disturbed the Earth's magnetic field is on a 9-point scale. Credit: NOAA

UPDATE 09.26.11 - A strong-to-severe (Kp=8) geomagnetic storm is in progress following the impact of a coronal mass ejection (CME) at approximately 8:15a.m. EDT (12:15 UT) on Sept. 26. The Goddard Space Weather Lab reported a strong compression of Earth's magnetosphere. Simulations indicate that solar wind plasma has penetrated close to geosynchronous orbit starting at 9am. Geosynchronous satellites could therefore be directly exposed to solar wind plasma and magnetic fields. High-latitude sky watchers should be alert for auroras after nightfall.

Sunspot 1302 has already produced two X-flares (X1.4 on Sept. 22nd and X1.9 on Sept. 24th). Each of the dark cores in this image from SDO is larger than Earth, and the entire active region stretches more than 100,000 km from end to end. The sunspot's magnetic field is currently crackling with sub-X-class flares that could grow into larger eruptions as the sunspot continues to turn toward Earth. Credit: NASA/SDO/HMI
› View zoom larger
› View full disk image Behemoth sunspot 1302 unleashed another strong flare on Saturday morning--an X1.9-category blast at 5:40 am EDT. NASA's Solar Dynamics Observatory (SDO) recorded the extreme ultraviolet flash.

The movie (above) also shows a shadowy shock wave racing away from the blast site. This is a sign that the blast produced a coronal mass ejection (CME) that could deliver a glancing blow to Earth's magnetic field on Sept. 26.

Since the X1.9-flare, active region (AR) 1302 has unleashed M8.6 and M7.4 flares on Sept. 24 and an M8.8 flare early on Sept. 25. None of the blasts have been squarely Earth-directed, but this could change as the sunspot turns toward our planet in the days ahead. AR1302 is growing and shows no immediate signs of quieting down.

Updates will be posted as warranted.