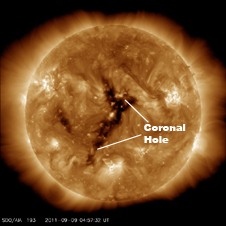 The Sun as viewed by the Solar Dynamics Observatory (SDO) in 193 angstrom. The verticle black area near the center is the coronal hole. Credit: NASA/SDO
› View larger UPDATE: 09.09.11 - A strong geomagnetic storm is in progress following the impact of a CME around 7:30 EDT on Sept. 9th. This could be the first of several hits from a series of CMEs expected to reach Earth during the weekend, related to the sunspot 1283 flares during the week. High-latitude sky watchers should be alert for auroras after nightfall.

A high-speed solar wind stream flowing from a large coronal hole should reach Earth on Sept. 11-12 sparking even more aurora. 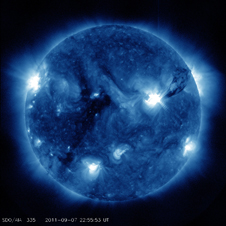 Leaping off the sun to the right is a giant plume of solar material – ionized gas called plasma – from sunspot 1283. This sunspot ejected four solar flares and three coronal mass ejections from September 6 to September 8, 2011. The picture here, captured by the Solar Dynamics Observatory, shows light with a wavelength of 335 Angstroms. Credit: NASA/SDO/AIA
› View larger 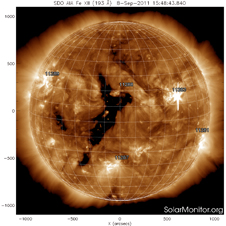 Current sunspot locations are indicated on this image taken by SDO in 193 angstrom. The vertical black portion is a coronal hole, a source of high-speed solar winds. Credit: solarmonitor.org
› View larger A third and fourth flare have erupted from sunspot 1283. The third came on September 7 at 6:36 PM ET, and was categorized as an X1.8 by the GOES spacecraft, making it the second X-class flare within 24 hours. There was a coronal mass ejection (CME) associated with all three of the recent flares, but none of them are expected to travel directly toward Earth, and the first two were unlikely to cause aurora. NASA computer models suggest that the latest CME may give a glancing blow to Earth on the morning of September 11, and might create some aurora.

The fourth flare from this same sunspot was detected by GOES at 11:36 AM ET on September 8. This was an M6.7 flare, considered moderate.

More info will be posted as it becomes available.