Grow Text SizeShrink Text Size
Sun Packs a Double Punch-UPDATED
UPDATE August 8, 2011: Below is one of the many aurora images sent in from the weekend's geomagnetic storm. Not just restricted to Canada, the Northern Lights spilled across the border into the United States as far south as Utah, Colorado, and Nebraska and for European observers as far south as England, Germany and Poland. 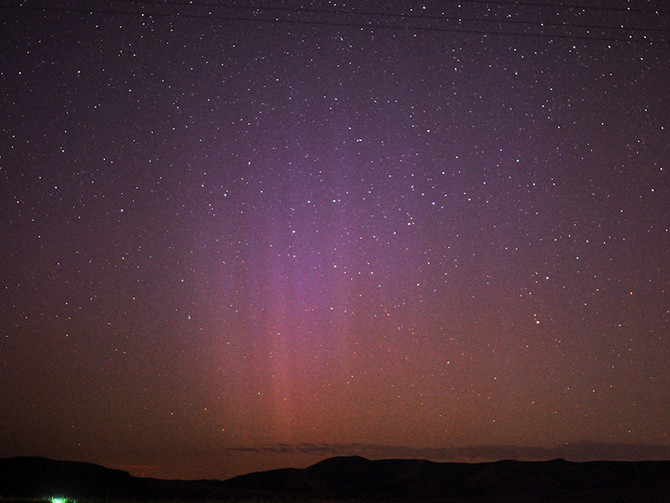 
UPDATE August 5, 2011: The initial August 2 coronal mass ejection (CME) arrived at Earth August 4 around 5 pm EDT. The two August 3 CMEs combined, arriving at Earth August 5 around 1:20 pm EDT, resulting in a strong compression of the magnetosphere. The arrival of this double-punch CME is expected to result in auroras and minor to moderate disturbances in power grids at high latitudes. 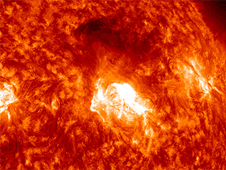 › View larger
This still from the video shows the cme lifting off from sunspot 1261. Credit: NASA/SDO On August 3, the sun packed a double punch, emitting a M6.0-class flare at 9:43 am EDT and a slightly stronger M9.3-class flare at 11:41 pm EDT. Both flares had significant coronal mass ejections (CMEs) associated with them that will give the Earth a glancing blow.

CMEs are solar phenomenons that can send solar particles hurling into space at high rates of speed, sometimes affect electronic systems in satellites and on the ground.

Based on current solar and heliospheric modeling carried out by the Space Weather Lab at NASA’s Goddard Space Flight Center, the flares are likely to merge and their combined effects will reach Earth’s near-space environment on August 4 around 7 pm EDT.

The flanks of the CME could impact STEREO A, Mars and Mercury/MESSENGER spacecraft. A CME of this strength is likely to cause auroras at high latitudes and may affect some satellite operations, but is unlikely to cause any major impacts to electrical systems on Earth.

Further updates on the event will be provided as they become available.