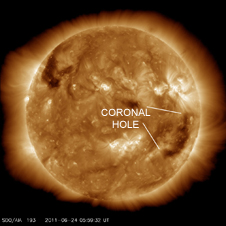 › View larger
Earth is inside a solar wind stream flowing from the indicated coronal hole. This image comes from the Solar Dynamic Observatory in 193 angstrom. Credit: NASA/SDO/AIA. UPDATE June 24, 2011 - A high-speed solar wind stream is currently impacting the Earth's magnetic field. The mixture of the high-speed stream and CME that erupted from solar corona on June 21 is expected to keep the geomagnetic activity level elevated. Auroral displays are possible at high-latitude locations.


UPDATE June 22, 2011 - A CME propelled toward Earth on June 21 may be moving slower than originally thought. Analysts at the GSFC Space Weather Lab have downgraded the cloud's probable speed from 500 to 400 miles per second (800 to 650 km/s). Impact is now expected on June 24 at 3am EDT (0700 UT) with a weaker blow to Earth's magnetic field expected. A relatively mild G1-class geomagnetic storm is expected when the cloud arrives.


Late in the evening on June 20 the sun emitted a long lasting C7.7 small class flare that peaked around 11:25p.m. EDT. A C-class flare is a relatively small flare.

The flare was associated with a coronal mass ejection that bloomed off the sun at 11:09p.m. EDT (0309 UT). The movie shown above was captured by the Solar and Heliospheric Observatory spacecraft.

Preliminary NASA modeling shows the CME to be moving in Earth's direction at almost 500 miles per second (800 km/s). Geomagnetic effects and possible auroras on Earth should be moderate, appearing on June 23.

› Play/Download
These 3D Heliospheric animated models, developed by the Community Coordinated Modeling Center based at the Goddard Space Flight Center, show how the CME cloud might appear as it sweeps past Earth. Credit: NASA/CCMC


What is a solar flare? What is a CME?