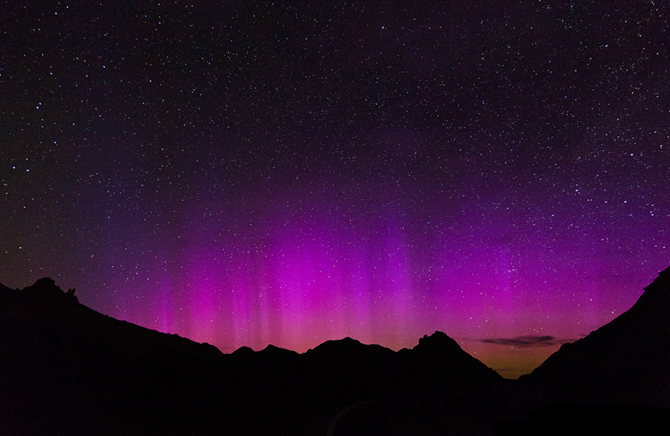 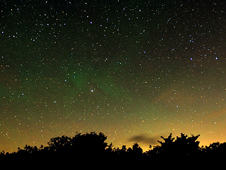 › View larger
Aurora were seen as far south as Ocean City, Maryland. This photo was taken by a camper on the shores of Assateague Island, facing North. Image courtesy of Jeff Berkes. On June 16, 2012 at 4:55 AM EDT, the combined effects of two coronal mass ejections from AR 1504, passed NASA's Advanced Composition Explorer (ACE) spacecraft on the way toward Earth's protective magnetic bubble, the magnetosphere. ACE is approximately 900,000 miles from Earth and can detect such incoming shocks about 30-45 minutes before they hit the magnetosphere.

Simulations performed at NASA Goddard's Space Weather Center indicate that the disturbance strongly compressed the magnetopause, ultimately to a minimum of approximately 24,000 miles from Earth's surface at 6:28 PM EDT. This is an altitude some 2,000 miles lower than spacecraft in geosynchronous orbit.

The changing shape of Earth's magnetopause also influenced the aurora, causing bright aurora to be seen at lower latitudes than normal, as low as Iowa, Nebraska, and Maryland. 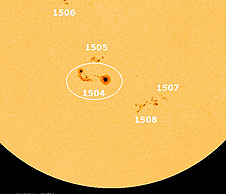 › View fulldisk
Active Region 1504 has been active since rotating into view. Credit: SDO/HMI An active region on the sun, numbered AR 1504, rotated into view over the left side of the sun on June 10, 2012. The region fired off two M-class flares and two coronal mass ejections (CMEs) on June 13 and June 14, 2012. The first flare lasted for a relatively long three hours, peaking on June 13, 2012 at 9:17 AM EDT. The associated CME traveled at approximately 375 miles per second and is directed toward Earth, though due to its slow speed, the effect on Earth is expected to be minimal.

The second M-class flare was also a long-duration flare, and it peaked on June 14, 2012 at 10:08 AM EDT. The CME associated with this flare is traveling much faster – preliminary analysis at Goddard's Space Weather Center indicates it is traveling at speeds of approximately 800 miles per second. It is traveling toward Earth, and could also impact Mars and the Spitzer spacecraft.

The Space Weather Center models estimate that both CMEs will arrive on June 16.

We will provide updates if AR1504 generates additional space weather. 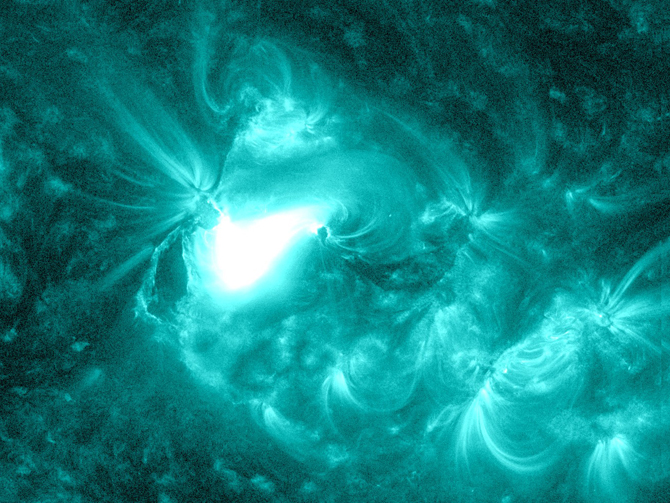 The Solar Dynamics Observatory captured this image of an M1.2 class flare on June 13, 2012. The sun is shown here in teal as this is the color typically used to represent light in the 131 Angstrom wavelength, a wavelength particularly good for observing flares. Credit: NASA/SDO
› View larger
› View full disk image