Grow Text SizeShrink Text Size
More Eruptions from Active Region 1476
UPDATE: Active Region 1476 has now rotated to the right side of the sun's disk. It has been quiet for a few days, but erupted with an M-class flare that peaked at 9:47 PM EDT on May 16, 2012. A coronal mass ejection or CME was also associated with the flare. It burst from the sun at 9:48 PM EDT and is traveling at over 930 miles per second. NASA models suggest that it will not impact Earth and cause a geomagnetic storm, however it may pass by the Messenger and STEREO A spacecraft. NASA labels CMEs at this fairly fast, but not extreme, speed as Type O –for "occasional," since CMEs with speeds in this range happen a few times per year. 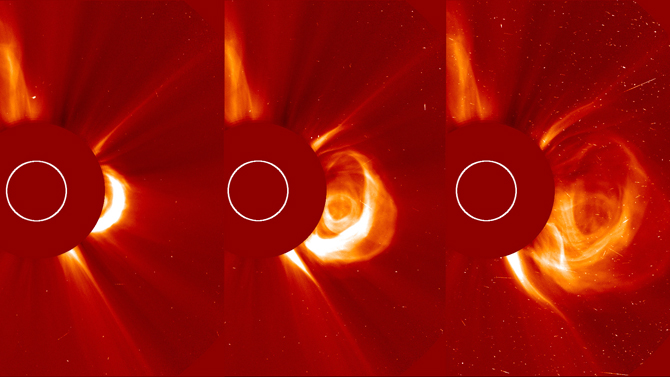 A flare's light reaches Earth in eight minutes and can cause radio blackouts. According to NOAA's space weather scales, this M-class flare produced a moderate radio blackout, meaning that both high and low frequency radio communication may have been blocked for tens of minutes.

A flare's arrival is sometimes followed by a front of solar energetic particles about 20-30 minutes later. In this case, a solar energetic particle event was detected at 10:10 PM EDT, causing a moderate solar radiation storm that has since subsided. Solar radiation storms can disturb the regions through which high frequency radio communications travel.

More information on the different kinds of solar storms:

UPDATE: 05.10.12 Due to current issues on the SOHO spacecraft, the LASCO instrument was not taking data during this event. This instrument is used to develop the near real-time coronal mass ejections alerts. The STEREO beacon data is now coming online and indicates a possible small coronal mass ejection. A preliminary indication of its direction indicates a low likelihood of any geomagnetic storms at Earth. 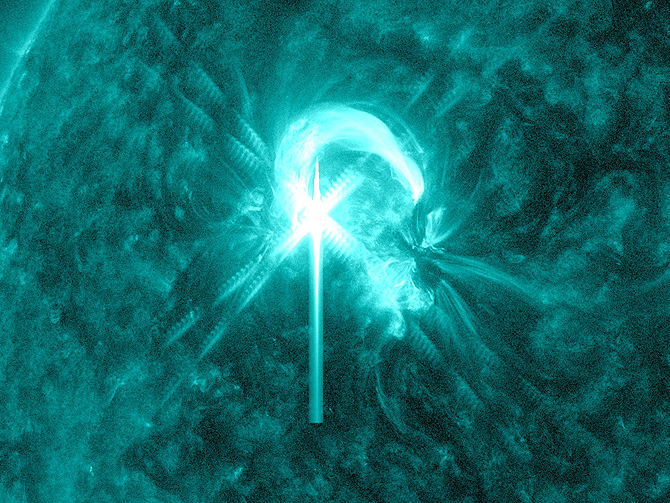 The sun unleashed an M4.7 class flare at 8:32 EDT on May 9, 2012 as captured here by NASA’s Solar Dynamics Observatory. The flare was over quickly and there was no coronal mass ejection associated with it. This image is shown in the 131 Angstrom wavelength, a wavelength that is typically colorized in teal and that provided the most detailed picture of this particular flare. Credit: NASA/SDO
› View larger
› View full disk image

A particularly large and complex sunspot appeared over the left limb of the sun on Saturday, May 5, beginning its two-week trek across the face of the star in conjunction with the sun's rotation. The sunspot, dubbed Active Region 1476, has so far produced seven M-class flares and numerous C-class flares, including two M-class flares on May 9, 2012 that peaked at 8:32 EDT and 10:08 EDT. These flares were all short-lived and there were no associated coronal mass ejections, so we do not expect any geomagnetic storms at Earth. 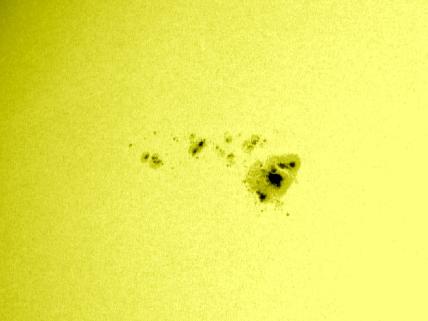