Grow Text SizeShrink Text Size
Sun Emits Mid-Level Flare
The sun emitted a mid-level solar flare, peaking at 1:32 pm EDT on May 3, 2013. Solar flares are powerful bursts of radiation. Harmful radiation from a flare cannot pass through Earth's atmosphere to physically affect humans on the ground, however -- when intense enough -- they can disturb the atmosphere in the layer where GPS and communications signals travel. This disrupts the radio signals for as long as the flare is ongoing, and the radio blackout for this flare has already subsided. 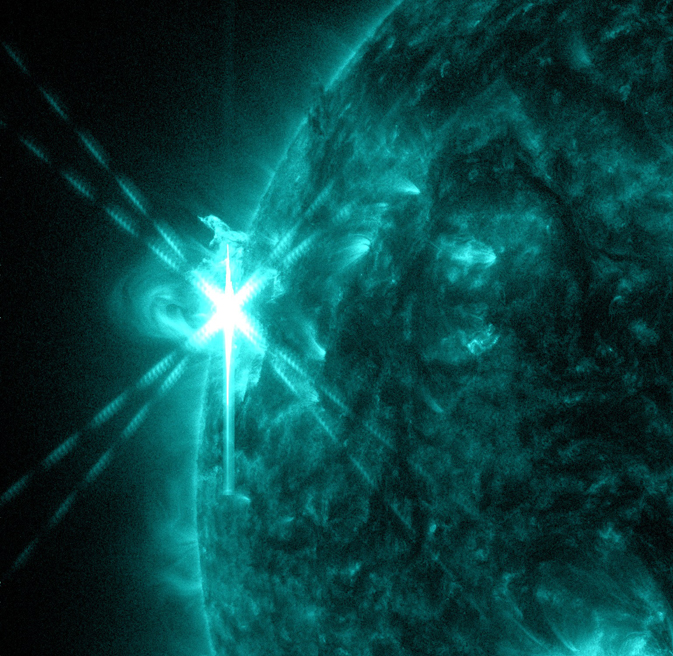 NASA's Solar Dynamics Observatory captured this image of an M5.7-class flare on May 3, 2013, at 1:30 p.m. EDT. This image shows light in the 131-angstrom wavelength, a wavelength of light that can show material at the very hot temperatures of a solar flare and that is typically colorized in teal.
Credit: NASA/SDO/AIA
› Larger image
This flare is classified as an M5.7-class flare. M-class flares are the weakest flares that can still cause some space weather effects near Earth. Increased numbers of flares are quite common at the moment, as the sun's normal 11-year activity cycle is ramping up toward solar maximum, which is expected in late 2013. 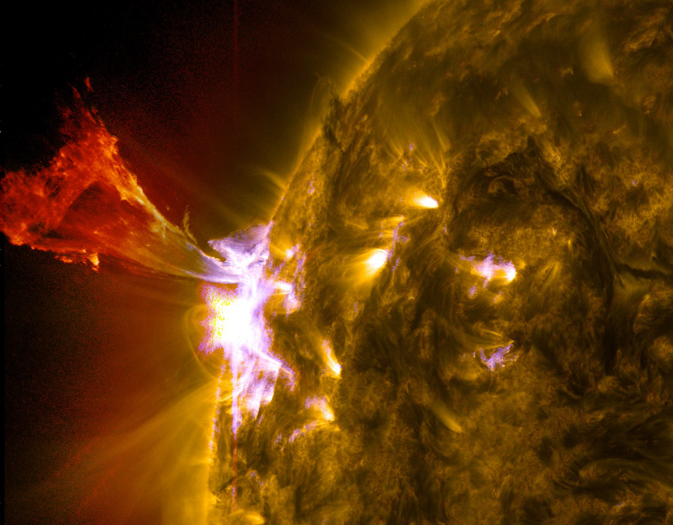 A burst of solar material leaps off the left side of the sun in what’s known as a prominence eruption. This image combines three images from NASA's Solar Dynamics Observatory captured on May 3, 2013, at 1:45 pm EDT, just as an M-class solar flare from the same region was subsiding. The images include light from the 131-, 171- and 304-angstrom wavelengths.
Credit: NASA/SDO/AIA
› Larger image
Updates will be provided as they are available on the flare and whether there was an associated coronal mass ejection, another solar phenomenon that can send solar particles into space and affect electronic systems in satellites and on Earth.

What is a solar flare?