Grow Text SizeShrink Text Size
Auroras Invade the US
UPDATE: Earth's magnetic field is still reverberating from a CME strike on March 10, 2011 which resulted in a G1-class geomagnetic storm. Northern Lights have rippling over the US-Canadian border into states such as Wisconsin, Minnesota, and Michigan. Solar wind conditions favor more geomagnetic storming in the hours ahead. Sky watchers, including those in the continental United States, should remain alert for auroras.

March 9th ended with a powerful solar flare. Earth-orbiting satellites detected an X1.5-class explosion from behemoth sunspot 1166 around 2323 UT. A movie from NASA's Solar Dynamics Observatory (above) shows a bright flash of UV radiation plus some material being hurled away from the blast site.

Coronagraph data from the Solar and Heliospheric Observatory show no bright coronal mass ejection (CME) emerging from this eruption. Some material was surely hurled in our direction, but probably not enough for significant Earth-effects. Updates will be provided as more information becomes available.

In addition, on March 10, 2011 around 0630 UT, a CME did strike a glaceing blow to Earth's magnetic field. This was a result of an M3 flare that occurred late on March 7, 2011. At 2,200 km/sec, this was the fasted CME since September 2005. Below is an impact image provided from a sky watcher in Canada. Visit www.spaceweather.com for links to more great aurora imagery. 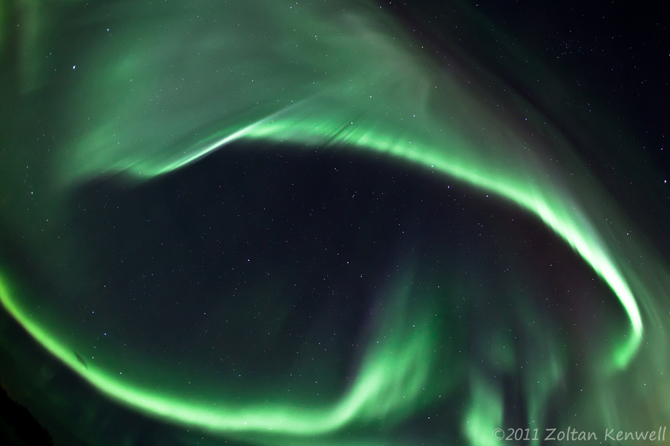 What is going on with all this recent solar activity?

After four years without any X-flares, the sun has produced two of the powerful blasts in less than one month: Feb. 15th and March 9th. This continues the recent trend of increasing solar activity associated with our sun's regular 11-year cycle, and confirms that Solar Cycle 24 is indeed heating up, as solar experts have expected. Solar activity will continue to increase as the solar cycle progresses toward solar maximum, expected in the 2013 time frame.

What is a solar flare and what does X-class mean?

A solar flare is an intense burst of radiation coming from the release of magnetic energy associated with sunspots. Flares are our solar system’s largest explosive events. They are seen as bright areas on the sun and they can last from minutes to hours. We typically see a solar flare by the photons (or light) it releases, at most every wavelength of the spectrum. The primary ways we monitor flares are in x-rays and optical light. Flares are also sites where particles (electrons, protons, and heavier particles) are accelerated.

Scientists classify solar flares according to their brightness in the x-ray wavelengths. There are three categories: C, M, X, with each one representing approximately 10x more power. The number following the letter indicates another factor applied to the basic classification scheme, from 1-9. At the high end, the X class can go higher than 9 because there is no higher letter classification.

What is a coronal mass ejection (CME)?

The outer solar atmosphere, the corona, is structured by strong magnetic fields. Where these fields are closed, often above sunspot groups, the confined solar atmosphere can suddenly and violently release bubbles of gas and magnetic fields called coronal mass ejections. A large CME can contain a billion tons of matter that can be accelerated to several million miles per hour in a spectacular explosion. Solar material streams out through the interplanetary medium, impacting any planet or spacecraft in its path. CMEs are sometimes associated with flares but can occur independently.